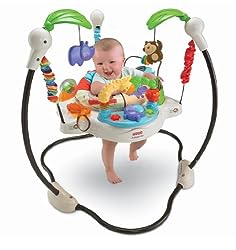 It can be hard to decide which of those big baby items to buy. It really is dependent on your child’s personality (I hope you aren’t tired of reading that 🙂 ). Here are my thoughts on the major items:

If you know people you can borrow things from, you might want to try it out for a while before purchasing it. We borrowed the exersaucer. I thought my daughter would love it, but in the end, I was glad we didn’t buy it.