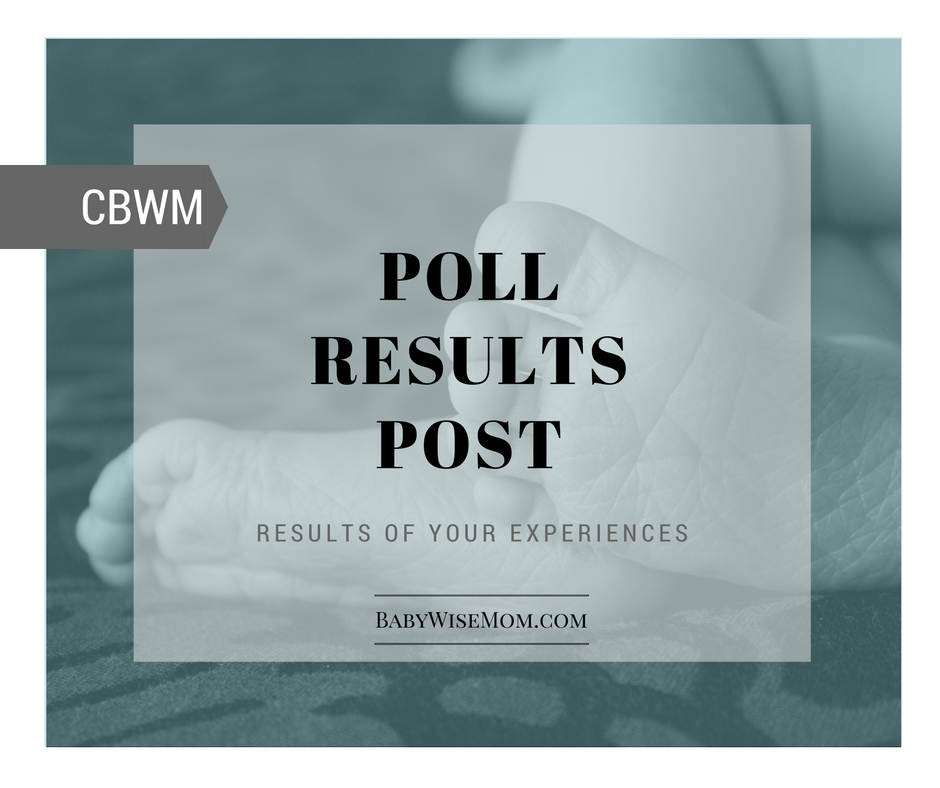 For so much of your baby’s first 18 months of life, you spend time wondering if it is time to drop the nap yet. A great way to keep on top of when is best to drop the nap is to know what the average age is. It is also very helpful to know what the outliers ages were and how that worked out (for example, if a child dropped a nap months earlier than usual, did the child still sleep well for naps and night).

Here are the results from this poll. Please feel free to comment below with your own experience. You can see the full, original comments here.

1-What age did your baby move from 4 naps to 3 naps each day?

5-What age was your child done napping consistently?

6-Any tips, advice, and/or words of wisdom for parents out there?

Christina said: Any tips, advice, and/or words of wisdom for parents out there?

Don’t fear losing naps. When you drop a nap, your baby will usually compensate by sleeping better at night or napping longer for the other nap(s). I remember dreading it with my daughter and found that even while constantly sick while pregnant, it wasn’t as bad as I thought (time she dropped naps entirely). It is a wise idea to institute daily room time or daily quiet time, though, for non-nappers. They need to learn how to respect YOUR time.

You will know your baby’s ready to drop a nap when he/she consistently won’t sleep a few times a week for several weeks in a row. Right now I can tell my son is close to dropping his morning nap (though not completely there yet) because when he does take two naps, they are usually 45-60 minutes at the most and he won’t fall asleep as easily at bedtime (and will just sleep 10.5 hours a night instead of 11 or 11.5 hours). I know he’s not fully there yet, though, because on some days, he gets incredibly fussy at naptime and actually does sleep. So not fully there yet but close!

My daughter was ready to drop naps when she stopped napping every day and did quiet room time instead. We got to where she’d take one nap a week and the other days were room time days. I’d set rules for her (quiet activities only, stay in your room unless you need to use the bathroom, let Mommy have HER quiet time), and if she broke a rule, I re-set the timer.

But honestly, dropping or eventually eliminating all naps is nowhere near as bad as I used to think it would be.

Jennifer said: We found that what worked well for our daughter was to extend wake time incrementally until there just wasn’t time for the last nap of the day. That’s even working now at almost 18 months. She’s now awake usually 3.75 hours for each wake time, meaning that she naps right up until lunchtime, and sometimes her evening nap goes later than is usually recommended. However, she still sleeps fine at night, so we go with it. At some point we’ll have to bite the bullet and not nap before lunch and do the one nap right after lunch and make bedtime earlier, but at this point, she has not shown that she’s ready for that change to happen. I think because her naps have always been 1-1.5 hours each (and now they are usually just one hour each), she is on the late side for dropping naps since she needs the sleep. If she napped longer, perhaps she would have been ready to drop earlier, if that makes sense.

Jessie said:If your baby’s sleep is off for a few weeks, it’s probably time for a change. Also, we wanted to preserve bedtime, so we probably dropped naps earlier because we were okay with earlier bedtimes for awhile.

We are in the midst of dropping to one nap at 13 months. It is definitely on the young side, but he has always dropped early and is well rested. Doing 2 naps every day makes for early mornings and a cranky baby but doing one nap for more than 2 days in a row ALSO results in early mornings and crankiness 🙂 Alternating days keeps him happy and well rested.

Natalie said: We knew it was nearing time to drop a nap when she started to struggle against the last nap of the day. She eventually would just not go to sleep. At first her bed time would be earlier, but we would progressively lengthen her wake times to compensate. And she made up for the missing nap with the extra sleep from the early bed time.

PESTAG said: Waketime needed to increase because naps lengths were shortening due to undertired. As waketime increased, naps were dropped naturally because there wasn’t time in the day for a nap to occur. We used Sleepwise Consulting’s method of dropping to one nap, which can be found on their website. It worked seamlessl

Lisa said: No real advice but interested to hear what others said. We went from 4-3 gradually as it was in the middle of leap 4 so I was happy to be getting any naps out of her. By the end of the leap she went from 4-3 with no hassle.