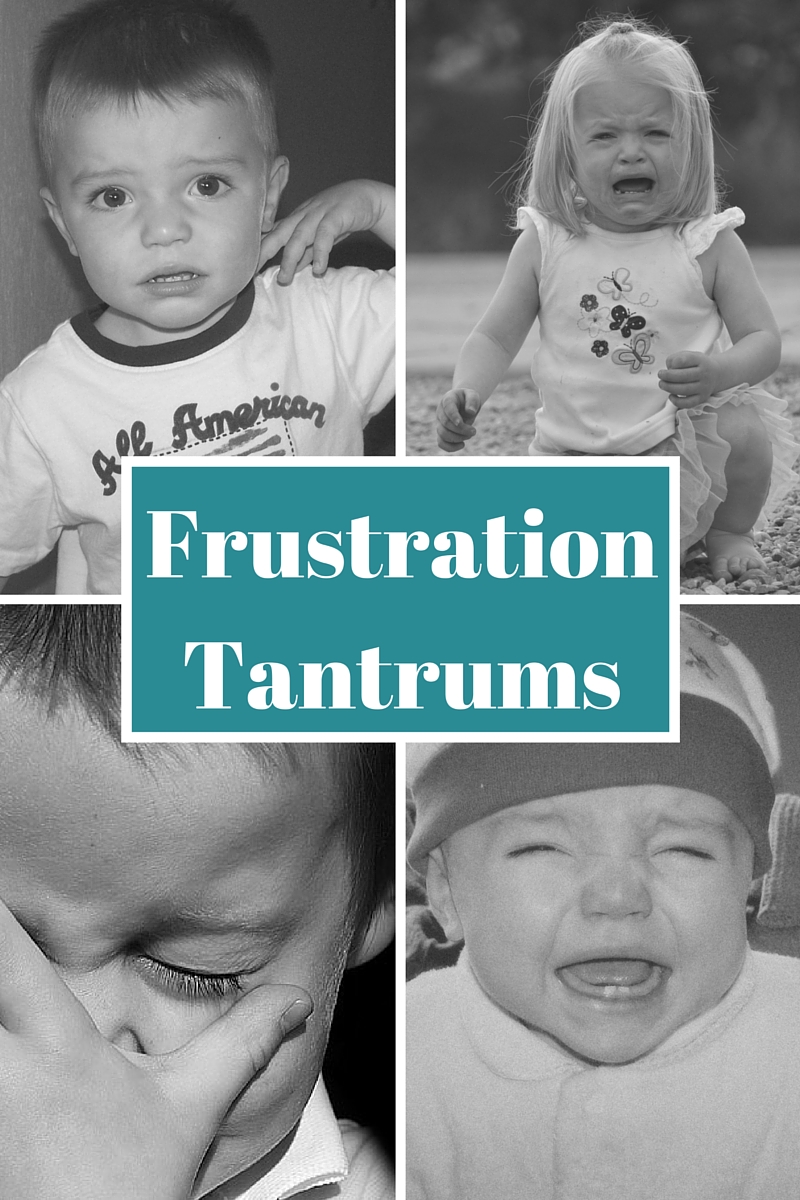 A frustration tantrum can be difficult to deal with. Your child is upset because she can’t get what she wants. This is when your child is trying to do something, can’t, and gets mad. She is frustrated because she isn’t getting her way, and she demonstrates that through a tantrum. A tantrum is not the type of behavior you want your child displaying, but you don’t want to stifle emotions.

Some of you have a child who has never thrown a frustration tantrum (yet). Some rarely ever throw tantrums.

Others of you think I made that last sentence up. You have a child who definitely throw frustration tantrums. I am not exactly sure what it is that makes a child prone to frustration tantrums so far as the core personality goes. My guess is the more particular and perfectionistic children are more prone to the frustration tantrums. They are, after all, throwing a tantrum because whatever they are trying to do is not happening. Another strong theory is the child who is very verbally adept won’t get as mad because she can express herself rather than feel like she needs to throw a tantrum to get help.

There are other things, however, I am sure contribute to the frustration tantrums. Let’s talk about those.

Brayden was much, much more of a frustration tantrum throwing than McKenna. However, his tantrums got a lot better when two things happened:

1-Independent Playtime: You might remember we started late. Once he was consistently having  IPT for at least 20 minutes a day on his own, his frustration tantrums greatly reduced. He had a lot more patience to try things on his own and had a better attention span.

2-Sign Language: A big reason for his tantrums was that he was unable to express himself for things like asking for help. I taught him how to sign “help” and it also helped a lot with his tantrums. It gave him something he could do other than just get mad.

McKenna’s frustration tantrums have been very mild and far between. I probably, in all honestly, wouldn’t even recognize them as such if I hadn’t had a little Brayden first. I would be willing to wager that her tantrums would have been more severe if I didn’t have preventative steps in place beforehand. She did IPT from the beginning of life, so she already had those skills built up to do things on her own and problem solve. I also saw early signals and mediated with necessary communication skills before things got to full-out tantrum stage.

McKenna is living proof that even with the best plans, intentions, and actions, the frustration tantrums will still come sometimes if your child is prone to them. So what do you do when that tantrum happens?

You say it calmly, softly, lovingly, encouragingly (and all other good “ly’s”), with a gentle smile on your face.

What will happen? Well, it won’t be that your child immediately calms herself down, tries again, and succeeds. At first, she might take a deep breath, half-heartedly try, then look at you with defiance to show you that you were indeed wrong to suggest she keep trying.

What do you say?

If it is something beyond your child’s skill ability, you might say,

“Do you need some help? Can you say ‘help please’?” You might accompany that with a sign if your child doesn’t say those words yet.

If it is your child’s skill ability, I would encourage her to keep trying and maybe demonstrate to her how to do it.

Sometimes, your child will refuse to ask nicely or to keep trying and will break out into further tantrum. In these cases, I either take the item away or remove the child from the item. I don’t ever give in with a “okay, I will help you” if the child refuses to ask nicely on an age-appropriate level. This does, of course, not apply if the child is in some sort of physical need–so if my child has climbed into a dangerous spot, I help immediately with no questions asked.

McKenna was not feeling well and wanted to put Brayden’s rain boots on her feet. She immediately got mad and screamed at the boots. I told her to keep trying. She waved her hands at them in a mad way. I wasn’t sure she was able to put them on herself, so I said, “Do you need help? Can you say ‘Please help’?”

At this point in McKenna’s life, when she was her normal, happy self, anytime she needed help she just came to me and said, “Mama, please help!” So I knew it was something she could say.

On this day, however, she looked at me with a scowl. Then she thought better of it and said “help please!” So I sat her down to put them on. At that point, she got mad again because she wanted to be standing when I put the boots on her feet. I encouraged her to ask nicely for that to happen, she refused, and we put the boots up. So that story didn’t end the way she would have liked, but it did end in a way that taught her an important lesson about being nice.

When Brayden was around one, he discovered the fun of climbing up one step in our house. He would climb up, but felt nervous to step down on his own. Anytime he got up on the step, he would immediately scream in frustration because he wanted to get back down (so he could step up again). I taught him to sign help. He would then get up, get mad, I would remind him to sign help, he would sign it, I would help him. I did eventually help him learn to step down.

With Brayden, I really had to carry on the “keep trying!” phrase for a long time, and now that he is 5.5, I can’t think of it being a consistent phrase I chant to him, but I am willing to bet I do still use it. I also know, because he has told me, that when he is alone trying something, he will say, “keep trying!” to himself and he does it!

There are fun ways to address this issue, also. The Little Engine That Could is a great book to read to talk about trying really hard even when the task seems daunting.

Something specifically I am doing with McKenna right now is working with puzzles. She is 22 months. We get a puzzle out. She tries to put the pieces back in. When they don’t magically jump right into place, she gets mad. It is a skill I know she has, so I encourage her to keep trying. Sometimes I show her how to turn and manipulate the piece so it can fit. I keep encouraging her to try, and when she gets it, I cheer for her and say, “You did it! You kept trying and you did it!” I think pointing this out to the child is very important. I did it with Brayden and do it with McKenna. I also give her high fives because she loves those.

You can do similar things with lots of toys–shape sorters, Legos…anything that is a challenge for your child.

These are some ideas for you to be able to help guide your child through the frustration tantrum. Work through it gently, and some day your child will tell himself to keep trying when you aren’t there!