Tips for Avoiding and Responding to Tantrums. Strategies to avoid tantrums and strategies for how to respond when tantrums do happen (because they will).

Toddlers are going to have tantrums; you can’t stop that. You may not be able to stop tantrums from ever happening, but the way you handle them can significantly affect the frequency and duration of the tantrums. Let’s remember some things first:

With those foundational points in place, let’s discuss tantrums more. Below are strategies for avoiding tantrums, strategies for dealing with tantrums when they happen, and some specific tips for using time-out.

Strategies to Avoid or Minimize Tantrums

Temper tantrums will happen at some point, but there are plenty of things you can do to minimize the frequency and severity of temper tantrums. Here are some ideas I love from the book Parenting the Strong-Willed Child:

These are some concrete, real tips that really work for tantrums. Keep your child rested and fed. Teach your child to express himself without fits. Make sure the tantrum doesn’t work for the child–those are the top three  key tips to focus on before adding the other tips (in my opinion).

Strategies for Dealing with the Tantrum

Tantrums do happen. So here are some ideas of what to do when then do. Your goal is to minimize future outbreaks :). 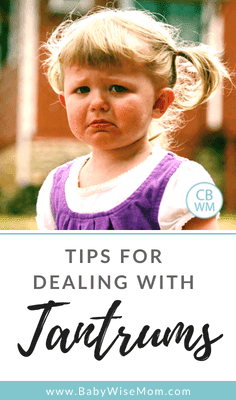 Rules for Isolation (time out)

If you choose to use time outs, here are some rules to follow:

I personally use time out only when it is a big offense. I can count on one hand the number of times time out has been used, and those have usually been when he needs to calm down. Otherwise, there are loss of privileges. I let the punishment fall in line with what the offense was.
As you can see, there is a lot of information available through just two of the books I mentioned. Here I give some ideas from the books and idea of my own, but I have only scratched the surface. It would be wise to read the books and soak it all in. Good luck in working with your child through these!

On Becoming Toddlerwise (affiliate) has some great advice for avoiding tantrums. If you have a toddler and don’t have that book, I would encourage you get it and read through it. Take notes for yourself so you can easily reference points of interest. On Becoming Preschoolwise (affiliate) also has many helpful tips aimed toward 3 years and up. Following that, there is On Becoming Childwise (affiliate), and more. Choose the book appropriate for the age of your child.

More Tantrum Posts On This Blog:

11 thoughts on “Tips for Avoiding and Responding to Tantrums”