Once you have your first child here, your next big decision is when to attempt to have the next one. Some couples are able to space their babies rather intentionally while others learn to accept what comes their way (whether that means closer or further than planned). 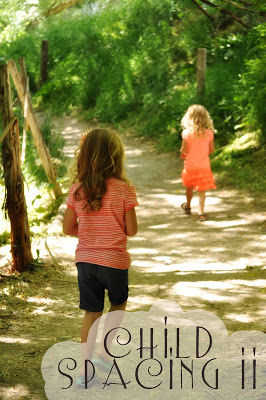 I have written on child spacing before in this post: Child Spacing. Even so, I have had many people asking about my thoughts on what is the best spacing of children, so we obviously have room for some more input here. If you want my thorough run down on the two year spacing of my first three as well as some thoughts on four year spacing, see my Child Spacing post.

With the addition of Brinley, we have some new spacing going on.

Brinley to Brayden is 7 years.

Brinley to Kaitlyn is 5 years.

Brinley to McKenna is 3 years.

Okay, let me just tell you, I have found three year spacing to be so very easy! McKenna was old enough that she could be quite independent. A two year old is still quite dependent for many things, but a three year old can dress herself, go potty independently, get her own shoes on, get herself a drink, and wait for pretty much anything she needs that she can’t get herself. A three year old also isn’t so sensitive for naps, so it wasn’t so worrisome come afternoon nap time if Brinley was off schedule and McKenna was going to get down for her nap late. The three year old doesn’t nap for much longer after baby is born, which means less time juggling multiple nap schedules.

There are some down sides. With a three year old, you start to get a taste of freedom and then it is all taken back to square one. Also, while you aren’t juggling two napping kids, you have a napping child longer than if you had them closer together.

Despite the drawbacks, I have found the three year spacing to be quite stress-free and enjoyable.

A five and seven year old are very helpful with a baby. They can be trusted in a lot of situations and love to help mom. I am guessing there might be unique issues that come up with this spacing as Brinley gets older (I forsee a couple of people who will think of themselves as Brinley’s second set of parents…), but we haven’t had problems as of yet. I also wonder about how things will be for Brinley when she is still waiting to start school and her siblings are all gone all day, and how she will feel when her siblings have all moved out and she is just starting high school.

A unique benefit with this spacing I never thought of ahead of time is the chance to teach them about babies. They have been learning about napping, changing diapers, feeding babies (they both about DIED when I told them about the new guidelines on introducing allergens to infants), dressing babies, baby safety, etc. They love having their baby sister and she just adores them.

Like I said in my previous post, thee is no “best.” There are drawbacks and benefits to each spacing dynamic. There are also different preferences and personalities of the parents having the babies. There is also number of children you plan on having to consider. I imagine age of parents would be a consideration, also.

I often sit and wonder if I were to choose now, do I like two or three year spacing best? I can’t say. Knowing what I know now, I still would definitely have my first two in the two year gap. I also wouldn’t change Brinley’s gap. I think an ideal situation might be have two close together, then a three year break and two close together. If I had stopped at three, then I think all three close together was ideal.

There is no one best spacing out there. As you are deciding for your family, keep in mind that closer in age will be more stressful for the parents, but the upside is you stay in your baby groove and your children are very close in age and therefore have similar interests and maturity levels. Further in age can really be a much easier thing to do because your focus is on one baby instead of basically two, but you spend more years total in being tied down to the house (and I actually appreciated that with Brinley–after running around with my older kids for a couple of years I really welcomed the break and the need to stay home more).

As you are thinking about your spacing, think it through, come to a decision, pray about it, and then get ready to either wait on the Lord’s timing or catch up to it :). You might also find you are on the same time schedule and need to get ready to enjoy the ride.

Each spacing has drawbacks and benefits, so whatever your spacing ends up being, enjoy it for what it is.