No, My Husband Is Not Babysitting OUR Kids. He is parenting them, just like a father should. He is busy being a dad, not a babysitter. 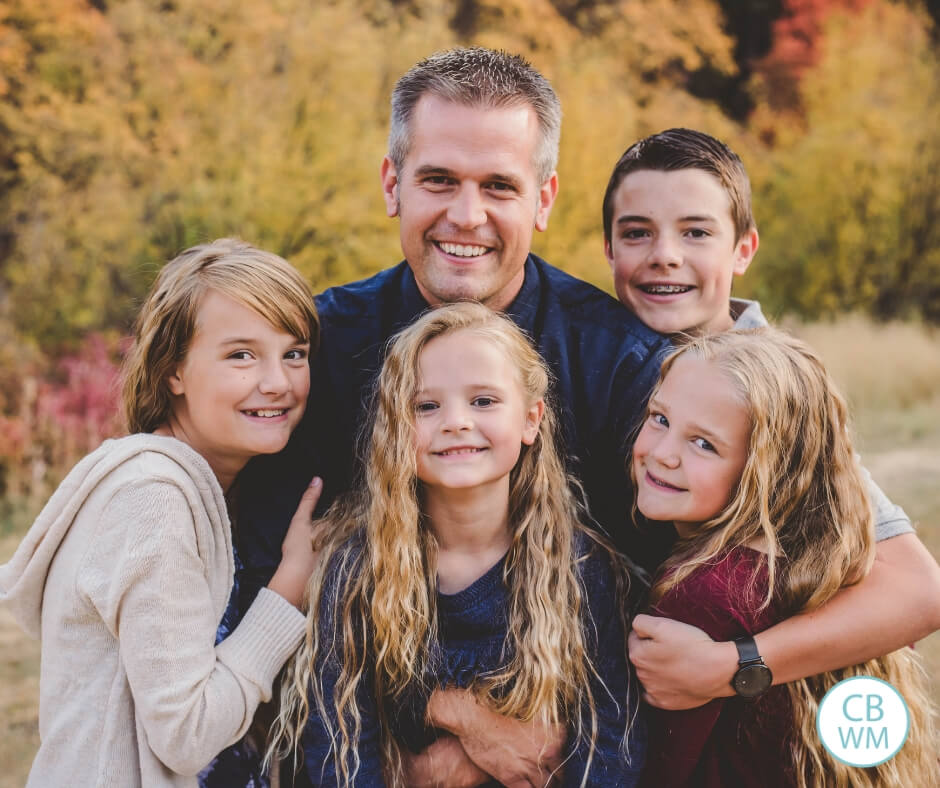 Brayden was only a little over a year old when I was at the park with some new friends in our new town. I didn’t know most of the names of the women around me. I barely knew our zip code! One mom asked another if her husband was going to babysit her kids while she went somewhere that weekend.

This led to a firm monologue all about this woman’s husband, how he wasn’t their babysitter but rather their father, and he better know how to take care of his own children.

But her little soapbox rant (a kind rant, but a rant all the same) really made sense to me. My husband, my son’s father, was not a babysitter to his own child.

Some might call it semantics. I can see that view point. Words have power, however. People like to use the word semantics when they don’t want to really face the issue at hand.

Women are most often the default parent. Even when both parents work full time, the woman is the primary parent in most cases. While a man usually feels comfortable making plans with friends or staying late at work, a woman can’t do so unless and until she is sure her children can be watched over.

A woman rarely says, “Hey honey, I am going out with the ladies for the night. See you later” without first having also made sure her husband would be home to take care of the children. She has probably also written out the evening routine and set out pajamas for the kids. I know with my girlfriends, we make an effort to always start girls nights after bedtime so we can be home for putting kids to bed.

A man does not “babysit” his kids. He doesn’t “watch” his kids. He parents them as a parent should. Here are some pitfalls we can face when we consider a father to be “babysitting” his children. 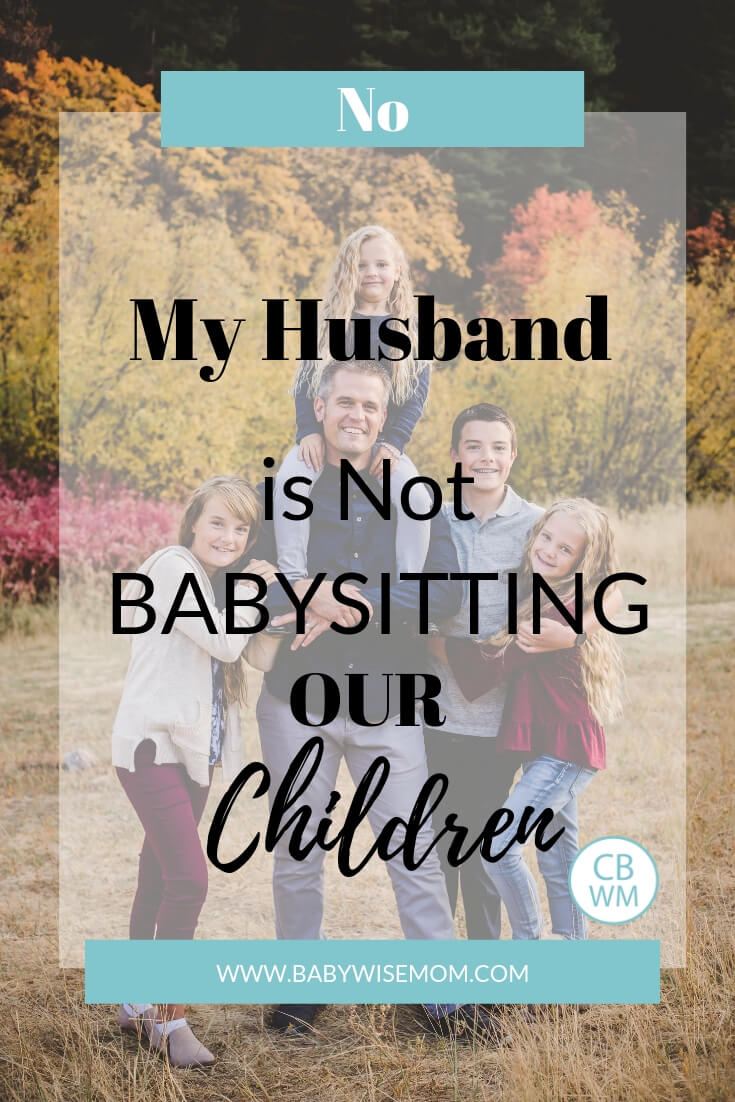 1-It degrades his role as a father

As a society, we give men so much grace–much more grace than we give women. It is nice to give grace, but in this case, we are either expecting much too little from fathers or much too much for mothers. Fathers are capable of parenting.

A man doesn’t care for his children only when his wife isn’t around. It is important for dad to be present.

My husband and I agree that when we are both home, we are both present and engaged. Yes, there are absolutely days when one parent or the other just needs a break. Those are times we should communicate with our spouse and say, “Hey, I am about to lose my mind. I am spent and need some time to recharge. Are you okay if I step out for a bit?”

What shouldn’t happen is one parent completely checking out when the other one is around on a consistent basis. Both parents should be on duty when both parents are home. Out of respect for each other, both should check in with each other before taking off or making plans.

Now, it does make sense to have certain zones each person is typically in charge of. This helps each person focus on their “chores” to put it simply and to compartmentalize.

It can be super valuable and helpful to sit down and write out all duties that typically need to be done and then dividing them up in a way that works for everyone. Will one do bedtime alone or will you divide it up? Will you alternate duties around the house? Will one be in charge of baths? What about putting away a child’s laundry? Who is doing hair each day? Talk through everything so you can be on the same page.

There are so many benefits to having a father. I have written on Father’s Impact on His Daughters.

Even from birth, children who have an involved father are more likely to be emotionally secure, be confident to explore their surroundings, and, as they grow older, have better social connections. “Fathers and Their Impact on Children’s Well-Being” You can read all about the Importance of Fathers here.

When we turn our spouses into babysitters, we remove the role of a father from his life. He is a babysitter that we leave lists for and don’t trust to make his own judgment calls.

Part of this means dad will be a father and parent in his own way. Parents need to be on the same page for big things, but if your husband changes a diaper a little differently than you do, that is fine. If he feeds them with a different flair, that is fine. For most children, if he does the bedtime routine in a different way than you, that is no problem (we did have one who was super particular about bedtime routine and we figured out we needed to compare notes and be on the same routine).

Children need a father. They don’t need your spouse to be a second you. You are awesome, but they already have you.

Part of wanting your spouse to be a parent and not a babysitter is letting him be a parent and not treating him like a babysitter. When Brayden was a baby, I would hover any time my husband was doing something “for me” with Brayden. If he fed him, I was right there watching. If he got him in his pajamas at night, I was close by making sure everything was done right.

Part of it was control. Part was me worrying he didn’t really want to be taking care of the baby and wanting to be close by in case he wanted to be done (this was an unfounded worry–I just worried).

Part of letting our spouses be parents rather than babysitters is stepping back and trusting them to do the job.

I am so glad I was at the park that day to hear the soapbox rant. It really helped me step back and reevaluate how I viewed my husband. Things would have naturally shifted as we had more kids out of sheer necessity. But it helped change my perspective and helped me be more intentional and mindful when my husband was parenting our children.

Consider carefully the words you use to explain the care each of you is providing your child. You do not want to strip your spouse of the role of father by using a silly word like “babysitting.” 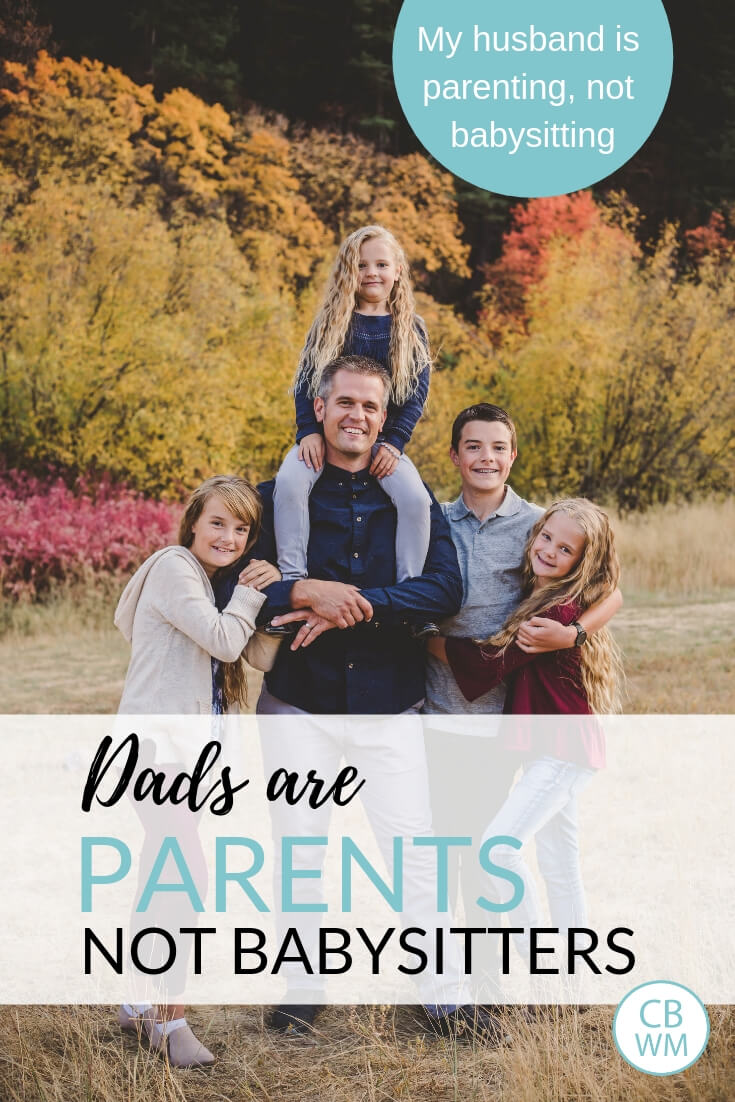