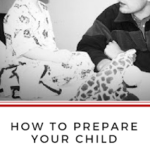 Find out how to prepare your child for surgery, what to take with you to surgery, and what to expect after surgery.

Two of my children have had surgery thus far in life. It is always a scary thing–surgery. While most of the time things go right, sometimes things go wrong and that can be nerve-wracking.

I think it is helpful to prepare yourself and your family ahead of time and to know what to do to help make the whole process easier.

With Brayden, I had months to research and prepare for his surgery. He had what is called “trigger finger” in his thumb, which meant his ligament was preventing him from extending his thumb fully.

His procedure was rather simple. I was able to talk to moms whose children had been through surgery and get their wealth of knowledge and experience before facing it.

With McKenna, however, I had less than 24 hours notice before her surgery, and a procedure was added during surgery, giving me no time to prepare.

Her initial surgery was for ear tubes, which is very simple, but she also had an adenoidectomy and a tonsillectomy added at the last moment. The tonsillectomy is not quite so easy and low impact.

Because of the short time frame I had with McKenna, I thought a post on this blog with genearl tips on prepping for surgery would be helpful for anyone of you whose child needs to have surgery.

Your doctor and hospital will give you ideas of things to bring with you to the surgery. Here is my list:

At Home After Surgery

Below is a post I wrote about Brayden’s surgery right after it happened.

Things went really well yesterday for Brayden’s surgery. Thanks so much for the prayers!

We got him up at 6 AM and whisked him off to the hospital. He was ridiculously chipper for waking up so early. We got to the surgical center and checked in. He was rather nervous. I had explained to him everything to the point of the mask they would put on, and he was not pleased about the mask.

We went to his room and changed him into his scrubs. We had brought some trains to play with, so once he was all settled and checked in, he and my husband played trains. This was wonderful. He got lost in play and didn’t worry about what else was going on. It also helped so he didn’t think about the fact that he couldn’t eat or drink anything. The surgeon came in to talk to us. He is a great surgeon who is so good with kids. Brayden got a lot more at ease after talking to him.

A few minutes after the surgeon left, the anesthesiologist came in. She explained what she would be doing. I told her he wasn’t pleased about the mask and she said that is common. We the picked up Brayden and carried him as far as we could. At that point, the anesthesiologist took him. He cried “Mama!” and reached for me and she walked down the hall with him. We went back to his room to wait. I of course cried, but I managed to wait until Brayden was gone.

It all went quickly and the surgeon was soon there telling us everything went well. He said it would be another 40 minutes before Brayden would wake up, then they would bring him to us. 20 minutes later we had a crying Brayden in our arms. My husband laughed because it just goes to show how much Brayden is a “sleep-fighter.” Even drugs won’t make him sleep when he doesn’t want to be.

He cried as the medicine wore off. He was obviously delirious. After ten minutes or so he calmed down. The nurse kept telling me to have him take a nap. I explained that just wasn’t going to happen at this time of day. It was 8:30 AM. As he calmed down, he did get droopy-eyed, but his eyes kept shooting open over and over again. I had to wonder if that is what he looks like for naps and bedtimes 🙂

The anesthesiologist came in and told us he only cried for a few seconds, then he got really brave. I thought that was funny because that means I cried longer than he did. We sent his favorite stuffed animal with him, so she tried putting the mask on the stuffed animal first, but that was not good. He didn’t want her to do anything to his Giraffe, he would take the mask. Later that day I told Brayden I heard he had been really brave with the mask. He said, “No Mommy, I was not brave. I was really scared.”

As soon as we walked out of the hospital, he was as happy as could be. I was glad he is a child who can be trusted. The surgeon told me if he would leave his bandages alone and be careful with them, he would just bandage, but if not, he would do a cast. So he just has bandages and is being really good about it, though he doesn’t like it. Things are going really well. He is playing and going about things as usual, though we have mixed up our schedule for a few days to work around limitations. I will explain that in a future post 🙂

Rachel said: Praise the Lord! I love that you cried longer than her did… Doesn’t that just go to show, “this will hurt me more than it will you!?”

Angela said: I am so glad Brayden is doing well. I think he was very brave!

Christie said: Praise God for giving Brayden (and you!) strength!! We will pray for a speedy recovery!

Maureen said: So happy everything went so well! With Lucas’ little surgery I had a choice of hospitals. I chose the one that allowed me to go in the OR. They let me hold him while they put him under. It was a little scary but since I was there, he didn’t cry at all. It was a little scary for me though. They didn’t prepare me much and said something about his body getting stiff. What?! After I laid him down, I walked to the lobby and 2 minutes later the doc came out and said she was done. It was so quick and painless.

Ann said: Thank Goodness for the surgery! I pray that he will have a quick recovery!! It sounds like he was truly a “big boy” as he chose the bandage route… that’s great!And I hear you about the crying as a parent. I have a 7.5 week old, and he is coming up on his 2 month immunizations, and I already feel teary eyed about it.

Manisha said: Glad to hear everything went well. Blessings to Brayden and you all.

Janelle said: I wish Brayden a speedy recovery! If you don’t mind me asking, what hospital did you go to? I live in Utah County and so I’m just curious. I’ve had to take my little one to Primary Childrens and it’s a great place.