When watching your kid’s games, think twice about how you treat the ref. That ref is someone’s child. You are also setting an example for your own children. 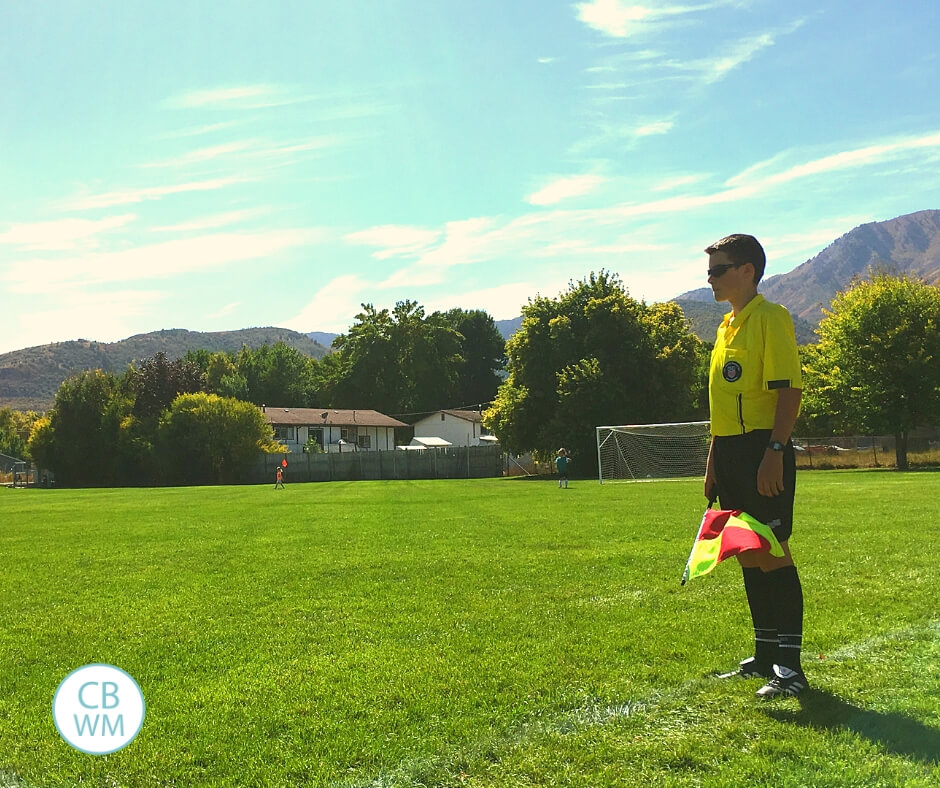 Parenting has a way of helping us become better people all around. In my younger years, it was easy to look at a ref as, well, a ref. Just a ref. Not a real person at all. We do this easily in sports–look at refs as objects rather than people.

It is easy to get mad at a ref. Refs can really make or break a game with one call, or one lack of call. It is frustrating when you are on the wrong side of a missed call. New Orleans Saints players and fans felt that pain in 2019 and some even went so far as to take the NFL to court over it. That feels intense and may look a little overboard, right? Parents can go overboard, too, and be even more intense at their kids’ games than fans are at professional sporting events. They forget simple things about how to be a good sports parent (like not being embarrassing).

But it is easy to forget refs are people. Parents get caught up in the heat of the moment and start yelling at refs.

As years have gone by and my kids have become older players, refs have become people I know. Kids from church would be reffing my child’s game. It changed my perspective some on who a ref was. Suddenly a ref had a name. The ref had a mom at home who love him or her fiercely. A ref was just a kid.

They try to start refs out working games that are with younger players. As refs gain experience and training, they work games with older players who are playing at a higher level.

Refs are hard to come by in large part because parents can be so aggressive that people do not want to ref anymore. In my son’s ref training, they were taught what to do when parents storm the field (because that happens at times).

Parents! Refs are being told to leave and call 911 if parents get aggressive toward refs.

Think about this. We are parents. Watching youth play a game. A game. We have a child on a team. And we are showing our child on the team, as well as our children sitting with us on the sideline, that it is okay to be so aggressive that the ref feels the need to call 911 for their safety.

We are showing these teenage refs that it is okay to yell and bully when we are mad and things don’t go our way.

Let’s not do that.

I know that the extreme situation of parents storming a field is rare, but not rare enough for it to not be part of their training. And yelling at refs is certainly not rare.

In all my games, I have never seen a parent get physically aggressive, thankfully. But I have seen and heard parents get very verbally aggressive toward refs.

Let’s remember, most of these refs are children. All of them are people. Real people. 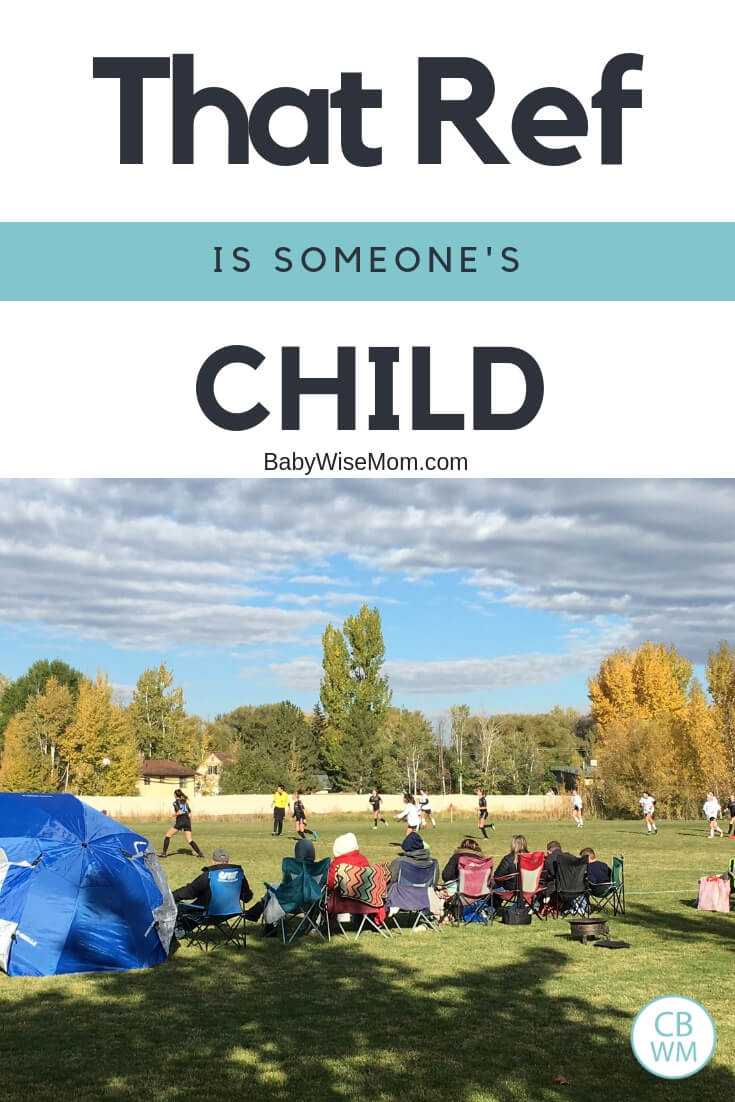 Let’s also remember, our child is sitting on the team and our children are sitting with us on the sidelines. They are watching our examples of how we act and treat these people known as refs.

Let’s remember we are now adults and looked to as role models of how to behave in society. When we lose our cool in a game, all of the children watching can take that as permission to lose their own cool in life. After all, that respected member of the community did at that game!

It isn’t a stretch for a kid to yell and scream at another kid at recess when a game doesn’t go her way if she sees her mom yelling and screaming at refs at her basketball games on weekends. Do you see how that isn’t a stretch at all?

I get the frustration when a bad call is made. I also get the frustration that in many instances, there is nothing you can do about a bad ref. They don’t have a boss there watching them and evaluating them. In the workplace, employees get feedback on their performance. They get corrected if they mess up. If a ref messes up, they get nothing but fan feedback. That is their “boss.” That is their evaluation.

But as fans, we often demand too much. We demand perfection from humans. We ignore our own bias toward our own players and treat refs like they are all out to get us. We take game situations far too seriously.

There is an effort in our area where we live to treat refs better. Many coaches do not tolerate aggressive parents on the sideline. Kaitlyn’s soccer coach does not and the fans are always nice and calm at her games.

One Saturday morning, he woke up to an email. The ref assigner was desperately looking for refs for a girls’ soccer game of girls older than Brayden. They were playing at a Premier level, which is the highest level you can play in the state. They just needed sideline refs, which is easy enough to do. The game was at the same time as Kaitlyn’s game at the same soccer complex, so it worked perfectly. He said he would do it. 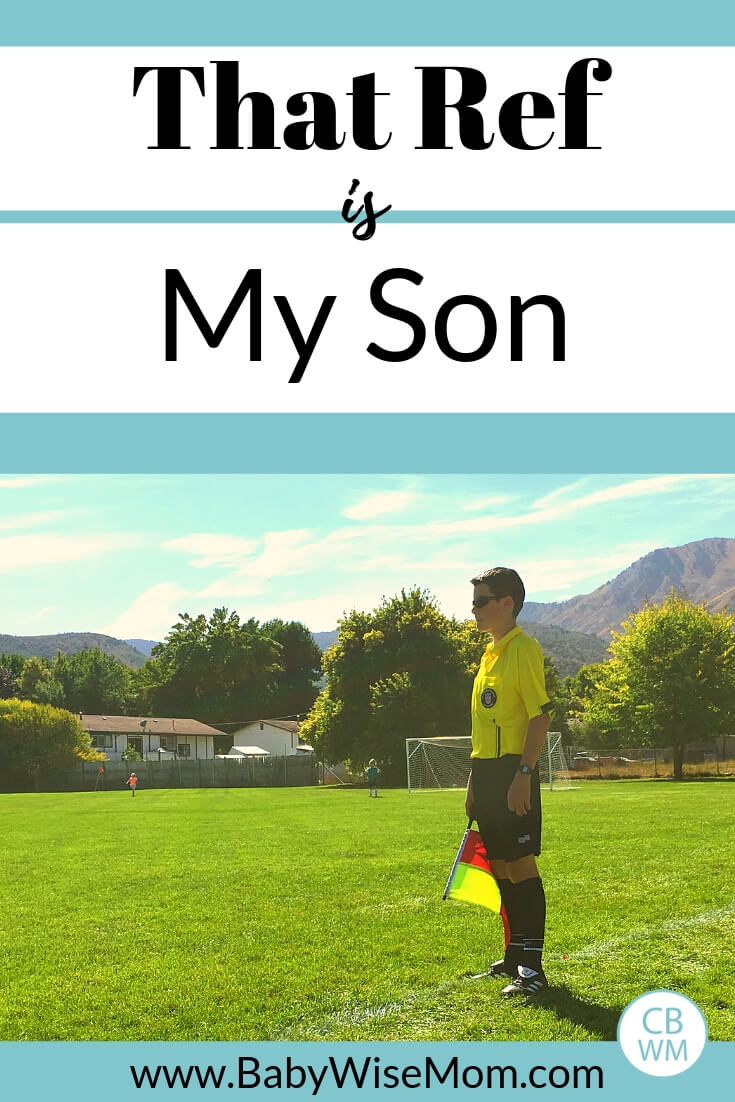 I came up on the game at the end of it. I heard parents yelling at him and even players yelling at him. It took all of my willpower to not go all mama bear and yell at the parents who were yelling at my son.

After the game, one of the coaches was kind and thanked him. He kept it together long enough to come to me and get away from the field. It was a rough experience. Fortunately, the game was not close enough for any of his calls to have made a difference in the game (which makes the angry parents more baffling), so he didn’t have any guilt to worry about. He reviewed his calls and felt they were right.

That game was followed that day by three other games with very nice parents, so Brayden was forced to “get back on the horse” and the horse was gentle and kind. He was able to be resilient and bounce back from it. It definitely left me with even more perspective on how we should be treating refs, however.

Remember you are setting an example to your children. This is a moment to practice what you preach to them. Do you teach them to be kind to others and to treat them as they would want to be treated? Lead by example.

That ref might be my son. This spring, that ref might also be my daughter. Treat them as you would like your daughter, son, husband, or father treated on that field.

How To Be a Good Sports Parent