How To Do Babywise with a Preterm Baby. You can implement Babywise even with a preemie.

When I was pregnant with my second child, I knew we would start Babywise from day one with her. We didn’t start Babywise with our oldest until he was 9 weeks old (read all about my tips for starting Babywise late here), and I wanted to just start off as we meant to go on with our second from the beginning. I knew that would make everything easier for her and for us.

Then she was born early. She also spent time in the NICU. I worried this would impact how we could implement Babywise. While Kaitlyn was born 3 weeks early, I don’t think it really had much of an affect on her ability to do Babywise. She was a really sleepy newborn, so we had about 6 weeks of really trying to get her to stay awake for feedings and waketimes, but she is also a big sleeper anyway.

So I turned to friends to share stories and advice of doing Babywise with a preterm baby (or babies), also known as premie babies. Here are their thoughts:

How to Implement Babywise with a Preterm Baby

“My son (I also have a Brayden:)) was a month early. I had pre–eclampsia. He was a VERY sleepy newborn. I had decided before he was born to do BW and I was very frustrated because he slept constantly the first month. Keeping him awake for nursing sessions was very difficult, let alon afterward. But, I was blessed with a healthy 7 lb baby, so like Kaitlyn there were no size issues.

My advice to other moms with preterm infants is to TRY to get them to take a full feed, and once they are having wakeful periods, try to have those occur after the feed. But don’t sweat their sleeping all the time in the first month or so. I have a couple of friends who had pre-term babies and we are convinced they are all such good sleepers because they just got used to sleeping all the time from the beginning (BW has something to do with that too).

To keep him awake while nursing, I would keep a glass of water in the fridge with a baby washcloth in it. When he would nurse and get sleepy I’d stroke his face with it to keep him up. That was how I tried to get him to take a full feed. I think that is VERY important and the ultimate goal to strive toward, just like the book says.

He had very bad reflux, which I think may be more common in preterm infants. To combat that I let him sleep in his infant seat in his crib until he was 3 or 4 months. But, he was a great sleeper. Started STTN and 8 weeks, and I have never fed him in the middle of the night since. He’s now 26 months old, 32 pounds and a great kid. No aftereffects of the preterm birth at all.” 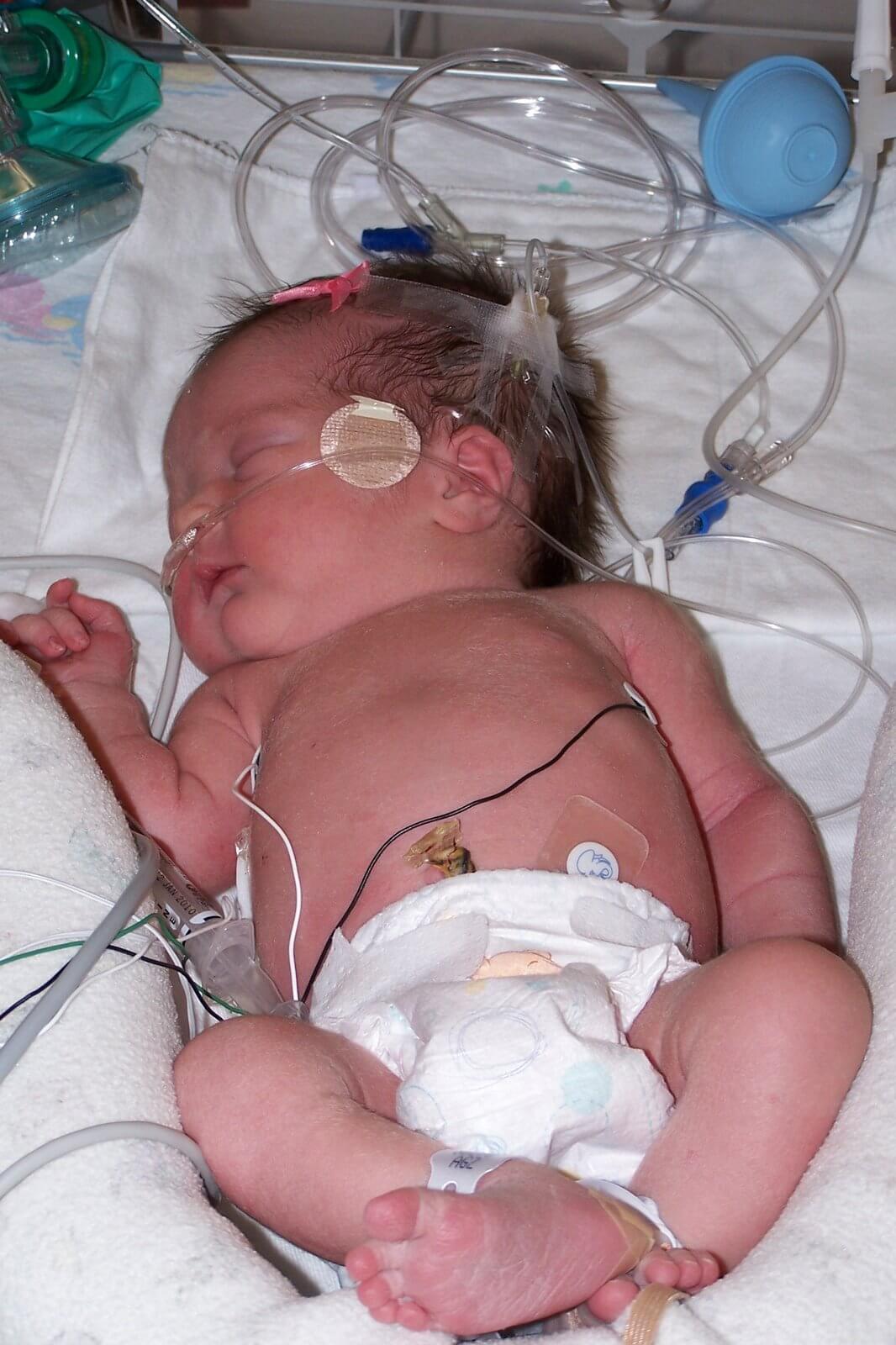 The twins were 12 weeks early. They spent over 2 months in the NICU.

With such preemies, you really have to go with their corrected age. When they came home from the NICU, I was required to feed every 3 hours around the clock. I didn’t even think about BW, STTN, naps, schedule at all. They would eat and then sleep, eat and sleep. No activity at all. Why should they? They were still supposed to be in the womb.

When they were around 4 mths old, (1 mths old corrected), I did incorporate some activity time, but not much. So they would eat, activity time for 5 minutes, then sleep. Repeat. After 10pm, they ate only when they woke up, whether it be once or twice and the day started at 6am. No schedules or naps, or anything BW still.

Around 5 mths old (actual age), they decided to wake up to the world (2 mths corrected). They had good weights and were relatively healthy. Hannah at this point had already been diagnosed as FTT [failure to thrive] and had severe reflux. Noah had severe reflux as well causing some breathing issues and was very very colicky. They no longer needed the nighttime bottles and they were fussy during the day. I had no idea where to begin. So i turned to BW at this point.

I think with preemies, you have to be comfortable and consistent. CIO worked well for N and was relatively painless for me. B/c of H’s health issues, CIO didn’t feel comfortable for me b/c i never knew why she was crying (could be pain, could be hunger, could be teething, could be anything).

Get your copy of the books here

Neither adhered well to the strict BW principles. Both are somewhat adverse to bottles and will never never take a bottle upon waking. so they get bottles before naps and bed. I was never concerned about them becoming attached to bottle b/c they just aren’t. I also never put them to sleep wide-awake. I always rocked until drowsy and then put in crib. So I took the BW concepts of scheduling, routine, etc. and applied them that way.

We were late comers to BW (wish i had started earlier and had not been such a wimp about letting them CIO) and b/c of thier issues we have to do very small steps. They slept in bouncy seats for first 5 mths (for 3 mths once they came home). Getting them to sleep in crib was a huge huge transition. Getting them to take full feeds was a huge huge problem due to reflux. So I had to work on things very very slowly. The 45 min naps took forever to get rid of.
They are know a year old corrected. Noah sleeps consistently 10-12 hrs at night (H is all over the place still) and both take 2 1.5 hr naps. It just eventually fell into place. I wish it would have sooner, but i had to go with my comfortability, their health issues, etc. as well.

So…overall advice. Go with your gut. Be comfortable. Always use their corrected age.
I could write a book on this as usual (with many diversions I‘m sure), but now that I’m a workin momma, not so much time. 🙂

I appreciate the contributions from these women. And as always, if you have any advice to add, please do so!

In The Baby Whisperer Solves All Your Problems (affiliate link), Tracy Hogg discusses preterm, low-birthweight babies and routines. Here are some snippits of what she says:

Read all about how to do Babywise here.

18 thoughts on “How To Do Babywise with a Preterm Baby”