Try as I might, Brayden, my oldest, did not nap longer than 45 minutes for months. He didn’t sleep through the night until he was old enough I certainly couldn’t remember what it was like to sleep uninterrupted. Those days were long and hard. Life was a major shock to go from no child and doing what I wanted when I wanted to never having more than a 45 minute window to do anything without a baby. There were days 7 PM arrived and I realized I hadn’t brushed my teeth yet! I worried about the importance of good, solid naps in the development of the brain and desperately wanted to know what I was doing wrong to cause these short naps! I was exhausted, emotional, and taxed. I couldn’t help but feel like a failure on some level. I did constant troubleshooting until the day finally came that we reached two hour naps and full night sleep.

Oh sweet mom of your first-born. I know your feelings. I was there once. I kept copious notes of our days. I couldn’t figure out what we were doing wrong. I have always been an intelligent person; I scoured the books trying to find the part I was missing. I know how to run an experiment properly to isolate variables accurately. I painstakingly went through everything I could think of. And still, it took me months to figure it all out.

Let me tell you, now as I look back on that time, I actually have enough distance and hindsight to have gratitude for those months. Brayden did not sleep through the night until he was 6 months old. He did not take two hour naps until 6.5 months old. During those six months, I learned how to problem solve as a mother. I learned it well enough to be able to help people over the internet just getting a paragraph or two of information. I learned the many variables that easily impact sleep. I learned it well enough that I have  been able to write many posts on solving sleep problems. I learned it well enough that my next three children, while all different, were able to be excellent sleepers. I had learned well. I had learned to spot sleep problems and to fix them quickly. I knew what to avoid. I knew what I should adhere to carefully.

Brinley, my fourth child, has always reminded me of Brayden as far as a baby sleeper. She was by far my best sleeper. I had learned well. My two most similar sleepers were my best and worst newborn sleepers. My most predictable and most erratic. You learn a lot about the intricacies of sleep when you have a baby who is a poor sleeper. Try to recognize the wisdom you are gaining as you try to solve these sleep mysteries.

A perk of it being your first child is you have more time and mental capacity to dedicate to this one child. Once you have other children, they have needs and you will have concerns for them in a myriad of ways. So I view being able to learn to analyze sleep well with just one baby to focus on as a major perk. I was able to learn what I needed to learn without distractions.

I know you are tired. I know it would be SO MUCH easier if someone could say to you, “Hey, at six months old, he is going to start sleeping through the night.” It would seem far away, but you could hang on with the finish line drawn out. We don’t get timelines in parenting. It is part of the learning process. 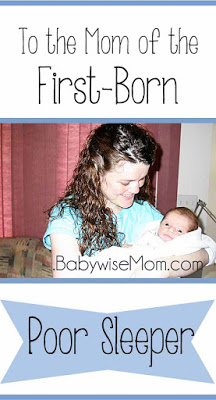 Now for the guilt you are placing on yourself. You might be doing something wrong–there might be something you could change that would fix it. I am confident that I could go back in time with Brayden and have him sleeping longer from a much younger age. You might just have a rough sleeper and there is nothing you could do to change it. That is possible.

Here is the most important thing, however. You are doing the best you can do right now. That is enough. You might find someday you had been making a mistake. Learn from it. Don’t beat yourself up. You aren’t making a mistake intentionally. You have to be able to expect your best because that is what you have to offer. Oldest children are always an experimental process. While I have a lot of wisdom in parenting my current three year old, I am always a first time mom with my current ten year old. That is what makes first-borns the kind of people they are in society.