I love trying to learn where other people are coming from. Their points of view. Their life experience. What makes them tick. What drives their decisions. This is one reason I chose to minor in Communications when I was in college. We studied people, their behavior, and why the were the way they were. I was pondering motherhood and what it must be like to be a wife to a man whose job puts him in danger each day. I have many friends whose husbands are in the military, fire fighters, paramedics, guards, and police officers. How would it be to send your husband off each day, unsure of how that day might end? I immediately thought of Shea. I asked her to write a post on the topic. 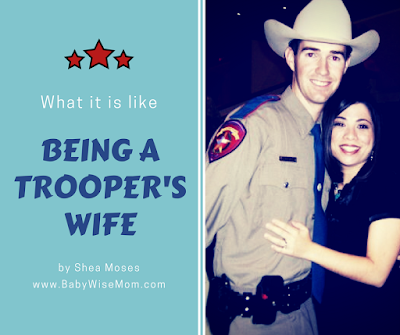 What is your favorite sound? I love the sound of Velcro. It brings peace to my soul. Before I get there, though, a special thank you to Valerie for inviting me to guest post on her blog! I have been a long time reader, so its a treat to be able to write for her today. My name is Shea Moses. I am Texas mom to four brown eyed girls ages 8, 6, 4, and 3. In December of this year, my husband Tyler and I will celebrate 10  years of marriage. I stay at home with my younger two daughters while my older two daughters attend public school and Tyler provides proudly for our family by doing a job he loves *almost* as much as he loves his Lord and his family.

He is a Texas State Trooper. He is a highway patrolman and commissioned Peace Officer by the state of Texas. Four months into our marriage, Tyler left our home for 6 {very long} months to endure rigorous training to earn his title. I was only able to see and talk to him on the weekends, as they were allowed to travel home from Friday evening to Sunday afternoon. 2 months into his training and only 6 months into our marriage we became pregnant with our oldest daughter. He began his career and we started our family simultaneously. He graduated from the State Training Academy in September of 2008, we had our first anniversary in December of 2008, and welcomed our first daughter into the world 4 weeks early at the end of January 2009. Its been a whirlwind of an experience ever since, and it has not slowed down. We have both learned a lot about how to balance his intense work schedule and family life over the last 9 years. There have been many challenges we knew we would face when he took his oath to serve and protect and then there have been the many challenges we have faced that have not been expected at all. I thought I would share what it is like to share life with a man who has a job that requires him to risk it  all every time he heads to work.

I mentioned the challenges that we knew were getting ourselves into before he began training. We knew that he would likely never be off on holidays or weekends. We knew that he would need to work night shifts and that getting called out at all hours of the night was in our future with certainty. I knew that his job was a potentially dangerous one, but it would not be until several years later that the weight of of this would really be felt by our family.

I got used to him working strange hours. I complained about it from time to time, especially when he had to miss family events or church events that all other husbands were able to come attend. The sting of his absence was/is felt the most when he has to miss these types of activities. I know he hates missing them just as much as I hate him missing them, though.

When Tyler and I decided that I would stay at home I remember him saying, “I keep such strange hours with my work, and if you stay home then the time that I am off duty you will be home as well.” I was sold then, and that was before we had children. Halfway through my pregnancy Tyler finished his training and was stationed to a duty station in a county that was 3 hours away from where we had lived and where I was still working. I quit my job and moved with him and have kept his same hours ever since.

When our daughter was born, I felt like I lived in a state of constant chaos between keeping up with a newborn for the first time and his insane schedule from work. He worked two weeks of days shifts, would have a few days off, and then would work two weeks of night shifts. I knew I needed to regroup, prioritize the most important things that needed to be prioritized (the baby’s sleep!) and set ourselves up for a successful way of living. This is when I realized I needed the baby to be on a healthy, predictable routine. I needed to know what I could expect from her, because with the nature of Tyler’s job- would never be able to easily predict/expect from his schedule. There would be no way I could keep count of the number of times I had dinner made, and a baby (and in the near future, multiple children) ready to eat – and – I get a phone call that he has to work a crash at the end of shift that will likely take several more hours. My schedule of the baby and then later on the other children needed to remain consistent so that part of my life could be somewhat “neat and tidy” so to speak. In order for us to be balanced as a family, I kept my our routine in check which made me feel less out of control when Tyler’s job required a change up to any plans we would have had for the day. 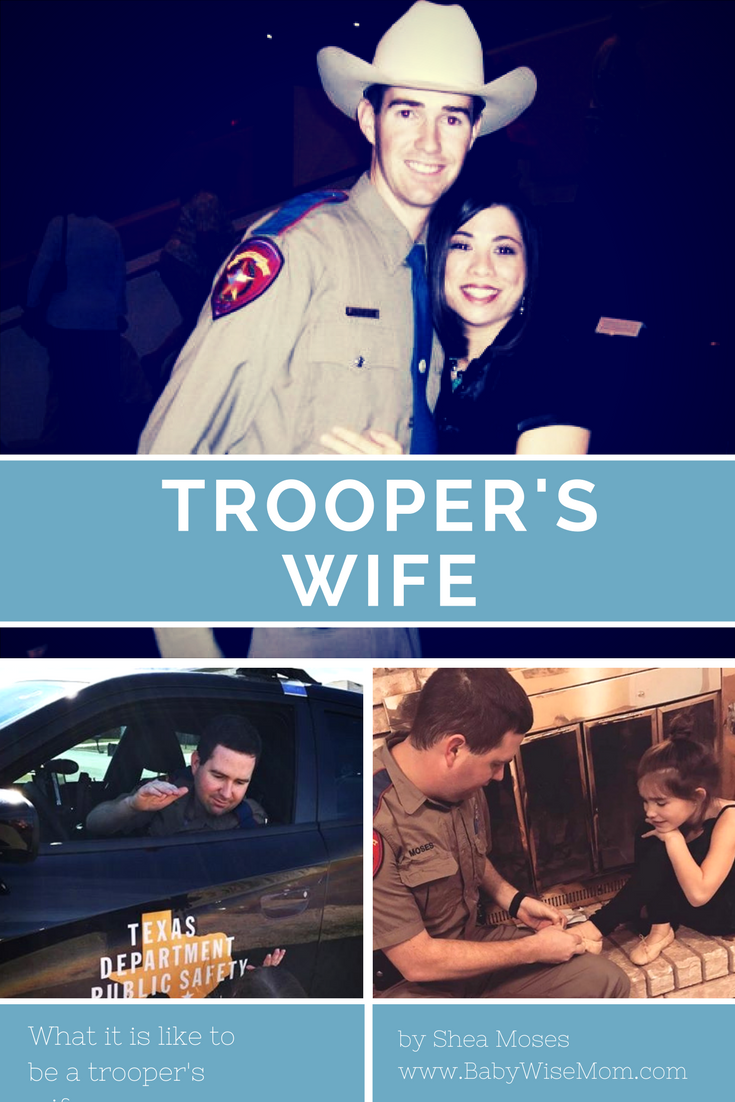 Law enforcement families are forever bonded to other law enforcement families. When I meet or talk to another woman/mother who is married to someone that wears a badge there is an instant connection. We know each others fears without ever having to speak out loud about them, and nothing can bring people together more than when you know each others greatest fear without it ever being said. Handling the dangerous nature of his job has been challenging.Two years into Tyler’s career he attended his first law enforcement funeral. A strong, young trooper who he went through the 6 month training academy with. He had a 6 month old daughter and a loving wife that he left behind. We still feel the sharp sting of the loss of Trooper McDonald. Two and a half years ago, in October of 2015 Tyler’s sergeant was killed in the line of duty. He was heading to south to defend our southern border (about 6 hours south of where we live) against drugs/illegal immigration and crashed on the way. Tyler knew him well, and worked with him every single day. I didn’t know him well, but I had met him several times and could tell you about his family. It didn’t matter. My world stopped spinning that day. I would never be the same again, and I didn’t even know how much I changed until I looked back on the year when we remembered the 1st anniversary of his death. I have become close to his precious wife. His son has recently followed in his footsteps, and took his oath to the same organization (The Texas Department of Public Safety) and will wear the same Texas tan uniform that his dad did for 25 years. We have experienced loss alongside our law enforcement family, and its a hurt that most will never truly understand.

It is not easy to say good bye each day as he heads out for work. If at anytime while he is on shift I can’t get a hold of him by phone, my brain goes to the darkest of places a lot of the time. The sound of the Velcro ripping off from his bullet proof vest is the sweet sound of safety and relief to me. It is not uncommon for me to wake up at 3 am because there was a crash and his phone rang to call him out. I have really had to learn to roll with things, and I do my best to not over analyze his every move. I could honestly make myself crazy with all of the what if’s, but he asks me not too. He asks me to pray for his safety and the safety of those he comes in contact with. He asks for grace when things don’t go as planned. He asks me to be understanding that working at the mercy of the public will likely be messy. He is sure to see and deal with many unpleasant things, but he feels confident that he chose the line of work that he was called to many years ago. He is proud of what he does, and I am proud to support him in his career. And at the end of a shift – the sound of Velcro is everything because it means he made it home unharmed.