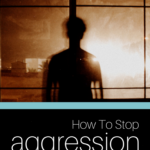 Get 9 tips for how to help your child stop being aggressive. This works for consistently aggressive kids and also occasional aggression.

No one wants their child to be bullied. It is something that would break our hearts.

But I think that even more so, we don’t want our child to be the bully. At least I feel that way.

Luckily, I don’t think it has to be an either/or situation.

Along the same lines, no one feels happiness inside when their little angel is aggressive toward another child.

Sometimes, acts of aggression come out on rare occasions. Your child might have been hit by another child and she is reacting to it or maybe it is an extenuating circumstance that really pushed her over the edge.

Perhaps you took her to the park at her nap time and she just can’t play nicely with others when she is typically sleeping so she gets aggressive.

This post isn’t about the rare aggression. We are talking about when you would describe your child as aggressive.

How to Stop a Consistently Aggressive Child

Today we are talking about consistent aggression and what to do about it. This information is found in Parenting the Strong-Willed Child

I will say, however, that there are strategies here that I apply even if my typically non-aggressive child shows aggression.

These nine tips can help you help your kiddo to stop aggressive behavior.