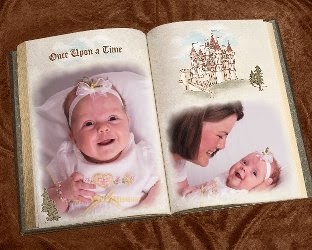 Starting as You Mean to Go On Later

Hogg mentions that many people think they will do these things around three months of age, and she states that three months is not some magical age. She also states that by then, your baby will likely have learned a lot of bad habits. You will encounter difficulties you couldn’t have avoided or at least minimized had you started as you meant to go on from the beginning.

Let me illustrate that with my own experience. I brought Brayden home from the hospital unsure of what I wanted to do with him, but pretty sure I would be able to basically wing it. I consider myself an intelligent person. I know I am a good problem solver. We spent nearly the first two weeks with my parents because we were moving. In that time period, Brayden was held almost around the clock. He then was not good at sleeping while in bed alone and also in no way capable of soothing himself. I started On Becoming Babywise  (affiliate link) with him at 9 weeks old. It took until four months for things to be pretty good (he didn’t cry for naps anymore). Then it took until 6 months for him to STTN and for naps to extend past 45 minutes in length consistently.

I knew I had caused or allowed to be caused a lot of his sleep difficulties. When I was pregnant with Kaitlyn, I had decided I would start cry it out sleep training with her at 3 weeks old. We got home from the hospital and at first she was really sleepy. At 5 days old, she stayed awake finally for a real waketime. I went to rock her to sleep, then thought, “She already sleeps so well on her own, why do I want to teach her to fall asleep differently?” I also thought it wouldn’t be fair to teach her to rely on rocking only to take that away two weeks later.

I decided she was ready and started cry it out (CIO) right then. I put her in bed, ready for some crying. She went to sleep without crying! Now, not every going to sleep session was like that, but she was overall much easier than Brayden was when it came to learning how to sleep independently. By 8 weeks, she was done crying all together for naps. It took her the same amount of time as Brayden, but she improved more quickly, and she was done crying before Brayden even started. I have used that same philosophy with her for her whole life, and things have just been so much easier.

This is akin to the idea of parenting outside the funnel (see How to Know What Freedoms to Give Baby). If you teach your child to rely on something or allow something your child isn’t ready for, it will only cause more work for you in the future, as well as more frustration for your child. Start as you mean to go on. 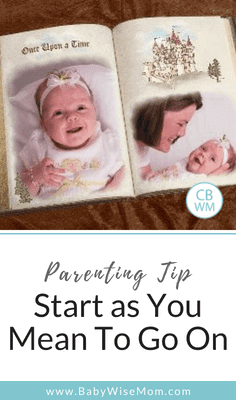 Hogg stresses to parents that you need to realize that you are making the choice. You don’t look far enough into the future or think about how your behavior affects the your baby. She says adults, not babies, create difficult situations. I agree with this and have stated it many times, usually in
conjunction with discipline.

Most “problems” you are having with your children are really your fault. They are happening because of something you are or are not doing. Hogg points out that parents need to take the lead and that you are smarter than your child. Children are dependent on parents for more than physically taking care of themselves; they need to learn morals and values from parents. They need to learn how to behave and how not to behave. This idea of start as you mean to go on is also a Babywise principle (see “Mom, not baby, decides…”).

Try to be mindful of what you are doing and how that will affect the future. This is harder to do with your first child than the others because you have never been there before. Think it through and your life should be much easier, and so will the life of your child.