Controlling the young temper tips. What to do when your young toddler has a tantrum.

I recently wrote about how Brayden (now 3) had a short fuse when he was about 14ish months old. I had a question about more details on what I did to curb that, and I thought it warranted a post all to itself.

To refresh, when Brayden was about 14 months old, he really started to show his impatience with accomplishing tasks. He is a complete perfectionist, and for him to try to do something and not get it perfect immediately was the ultimate frustration for him. He would immediately get mad and start to cry.

Although I have never seen such a reaction from my husband, I know he is the same way. I call it being a bit of an irrational perfectionist. I myself am also a perfectionist, but I completely understand the fact that you must put time into something to get really good at it, much less perfect. As a child, my husband would draw a picture, crumple it up, throw it away, and start over. His teacher and mother found out it was because his picture was not turning out how he wanted it to in his head.

I wanted to teach Brayden how to control his emotions and also teach him the proper expectations for life. This might sound like a weird expectation for that young of a child, but I was sure he could do it.

I don’t think this frustration is limited to the “irrational perfectionist” or those with a short fuse. Kaitlyn (now 16 months) displays a similar behavior on occasion. She is also a perfectionist, but one who is willing to work and work at it until she gets it. Her frustration comes after working at the same thing for 20 minutes without success rather than 20 seconds. Never-the-less, if my sweet little Kaitlyn can act that way sometimes, I can see it being something all toddlers do at this age.

The number one item that helped him with his temper was teaching him sign language. Because he was such a verbal child, I didn’t even think about teaching him sign language before that. His first word was at 8 or 9 months. I didn’t think he needed help. However, I think a lot of frustrations that happen after your little one hits a year old up until communication really starts to take off through sentences and the like is due to the fact that they understand a lot, but cannot even begin to communicate anywhere near to it. Some are more willing to try, but they just physically cannot say all that they know.

I used signs to teach Brayden how to communicate words that really helped him express his needs in these frustrating times. The main word for him was “help.” I taught him that instead of throwing a fit, he needed to ask for help. That was the biggest help in diffusing the little temper. Instead of the fit, his energy would go into signing help.

For more on signing and developing language abilities with your child, see:

This has been unnecessary with Kaitlyn. She already knows sign language, and she already speaks simple sentences. My next tip is the biggest help with her, and was also a huge help with Brayden.

Encouragement. I would and do tell my kids, “Keep trying!” in a really happy, positive manner. If it is a toy that is beyond their years (which can easily happen with Kaitlyn since we own toys beyond her ability), I take the toy away. This is not as punishment, just as a favor to the child. If the toy or skill is age appropriate, I tell them to keep trying and give encouragement as they work on it. Kaitlyn hears “keep trying” and happily replies “Kay” and keeps trying. Brayden would remain frustrated, try, fail, show more frustration…I just had to be the voice in his head that said keep trying! When he did it, I would say, “See, you kept trying and you did it! Good job honey!” I would also explain to him along the way that it takes lots of practice to get good at things and you have to keep trying. These days he is his own voice in his head (or maybe he hears mine 🙂 ) and keeps trying.

Having Independent Playtime to Prevent Tantrums

These days, Brayden is really good at putting a valiant effort into things. He sometimes still gets frustrated, but he will let out a whimper, take a deep breath, and keep working at it. The young temper is very short lived and pretty easy to manage. Some key theory points to take with you are these:

See these posts for more on discipline: 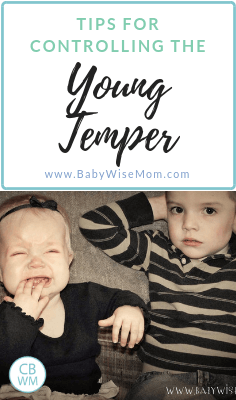