Teaching your baby to listen to the word “no.” Baby can understand what no means and respond appropriately. This post discusses how to accomplish this. 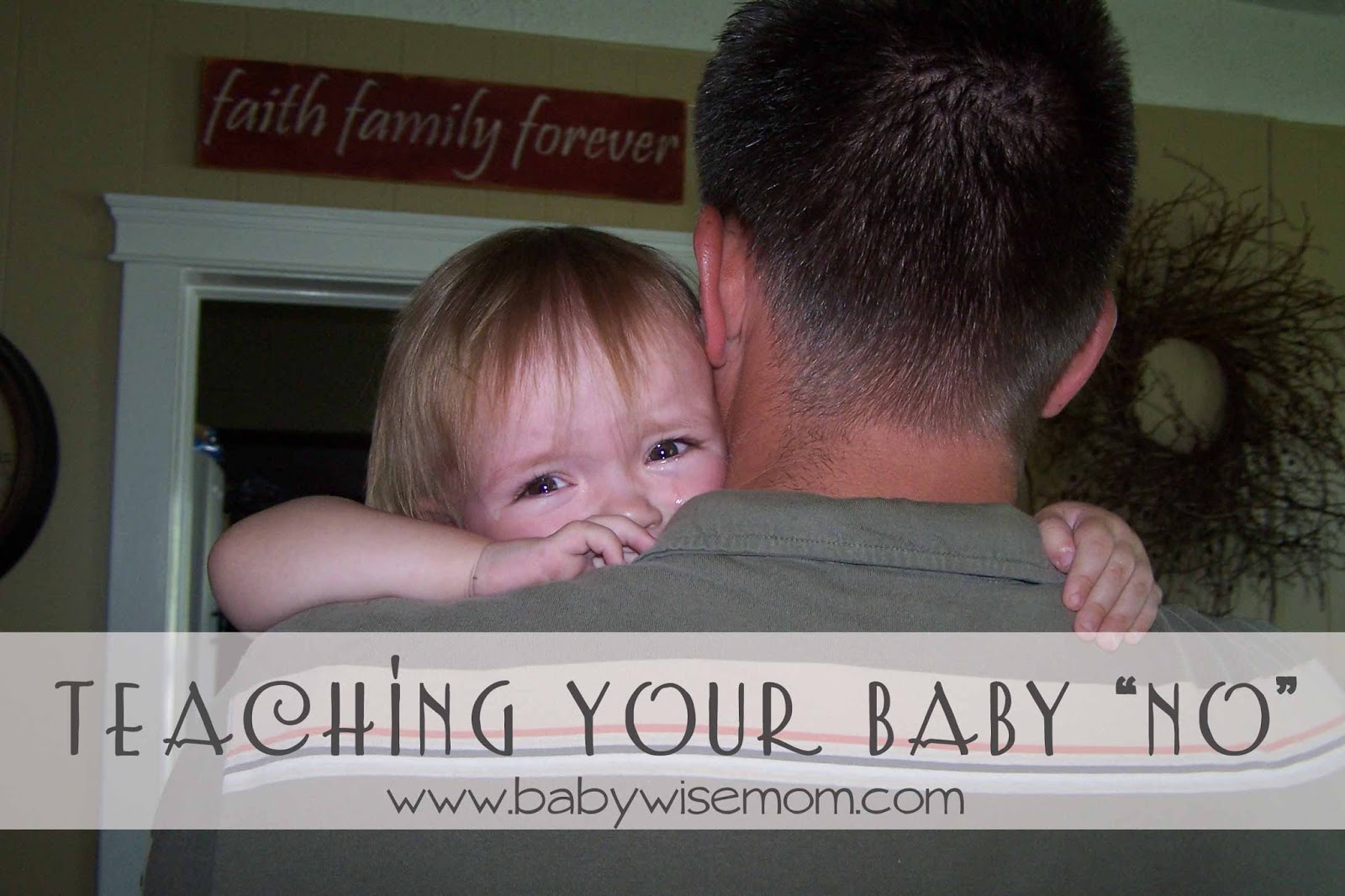 Many people believe a baby is not capable of understanding the word no until they are “older.” I am not sure exaclty what age “older” is, but it seems to be older than baby is, until baby is around a year, then baby just won’t listen. Baby will learn words early on that are heard often.

Both of my children showed an obvious understanding of the word “kisses” at 5 months of age. Every time I kiss them, I say “Kisses!” At 5 months, both started giving me kisses. So I would ask for it, and they would comply and come at me with a wet, slobbery, open-mouthed kiss (which I of course loved).

Despite the fact that I belive my children to be the two smartest, cutest, etc. etc. kids on the earth, I will concede that other children can understand words that young, also :-). Children understand words long before they are able to speak them.

As soon as you see a need for correction, I would recommend introducing the method you are going to follow. You need to choose what you want your method to be. The word “no” can easily become overused, but I don’t think that needs to be stricken from your vocabulary. Here are some strategies I follow in in correcting my children. Yes, I said children. 9 month old Kaitlyn needs it at times, too.

Tips to Teach Your Child To Understand “No”

Become Aware of Your Child’s Personality

I do intend to write more on this idea later, but will put some thoughts for now. If you aren’t naturally an intuitive person when it comes to people’s personalities (not everyone is), work to learn how to do so. I think the job of mother quickly teaches us this skill, but the sooner you become good at it, the better. This requires you to accept the fact that every person has their own strengths and weaknesses. Every person, including babies, have their own personalities. We are all different, view things differently, and communicate differently. Try to get to know your child.

As I have mentioned in previous posts, Brayden is a dutiful child who is very obedient. He does what he is asked far more than the averages given in Toddlerwise. It is a little young to tell for sure, but 9 month old Kaitlyn seems a little more intent to do what she wants; however, she also tests her boundaries far less often than Brayden did at this age.

Does your child resspond better to positive reinforcement? Most, if not all, do. Some are far more in need of this than others, though. My husband is one. He needs to be told he is doing a good job. If there is ever something I want him to be better at doing (like, putting his socks in the hamper), the best way to go about it is for me to wait, catch him in the act, and thank him for doing so. He will then do it consistently. If I go to him and say, “I would like it if you put your socks in the hamper instead of on the floor,” he would not respond so well.

Does that sound odd? Honestly, it does to me. I would rather you come up to me and tell me to put my socks in the hamper. But my husband is the way he is. It took his parents several years to figure this out when he was a child, but they say it made a world of differnce with him.

Brayden (now 2.5) is the same way. I recognized it somewhere between 6 and 9 months. There was no question I had another “praise junkie” on my hands. I don’t mean praise junkie in a bad way; they just need more praise than I do. I believe Kaitlyn is more like me in that area.

No matter how strong the inclination toward this, your child will prefer to be thanked for doing a good job to being scolded for a bad one. Get to know your child and you will have an easier time adapting discipline for him or her.

When Brayden was a baby, I didn’t have much in his path that I minded him touching. I had set the house up so that it wouldn’t be in his way. When he was around 9 months, I remember establishing a couple of things as “off-limits” for him to touch, not because I necessarily minded the way he played with them then, but I knew he potentially would get more aggressive in his play as he got older. I also wanted to have some things to be able to start working on obedience with him. 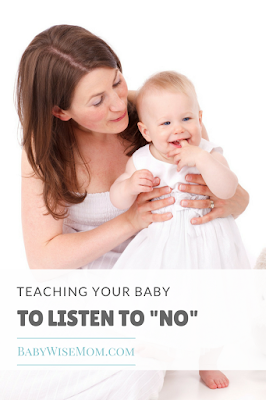 Another hint for rules, make sure you and your spouse are in a agreeance. Consistency is very important with correction.

Decide on a Phrase

On Becoming Babywise II (affiliate) has the phrase idea of “that’s a no.” I love that–it is what I use. I like it better than a simple “no” because it takes more effort for me to say, so I know I won’t start to say it out of habit. I also think I am able to say it with more conviction that just “no.” Pick whatever phrase you want. Keep it consistent.

Decide on a Method

First, I say the name of the child to establish eye contact. I have a look I give my children when they do something they shouldn’t. Without thinking, I give the look before I say anything else. Even my 9 month old will respond to that without me having to say a word.

After the look, I say, “That’s a no.” firmly. Remember what Babywise II says about letting your child have some dignity. If you have a strong-willed child, it might be good to look busy with something else and give your child the chance to stop doing what he is doing without feeling like he is losing some battle. If he doesn’t, I would repeat the above. Also, give your child some time to respond.

At that point, redirection is a good idea. If he is playing with the plant and you tell him that is a no, suggest you read a book or play with this or that toy. Give him some ideas to move on to.

That is honestly as far as I have ever had to take it (up until 18 months with Brayden, but I will do a toddler discipline post). There are other ideas listed in Babywise II for you if you need them.

Can you expect your baby to respond to your directions? Absolutely! You should expect a response. People rise to expectations. But keep your expectations within reason. What is within reason? Toddlerwise says a two year old will comply 60% of the time. A three year old, 70%. A five year old, 85-90%. That gives you an idea of what you can expect from your baby. This doesn’t mean that if you have a two year old you accept him ignoring you 40% of the time. You don’t say, “Oh, this is in that threshhold, I’ll move on and try again.” It just means your child is normal and for his age. You still work on it (these statistics found on page 94 of Toddlerwise).

Brayden’s toddler years have been quite easy over all. Believe me, he has had his moments. He has even layed down in the store once and cried. Overall, however, he is quite obedient. Part of it is his personality. As a 2.5 year old, he obeys at least 90% of the time. That boost in the statistic is his personality to be obedient and dutiful. The rest of it is due to him learning early on what I meant when I said, “That’s a no.” As a 11 month old, we went to visit some friends. They had no children yet and had some nice books right at his eye level. He was drawn to them. He went over and I told him, “that’s a no.” He left them alone for a while. He returned several times to the books, but never touched them. I was glad to be able to visit somewhere and be able to require my child to respect the property of others. I was glad I could tell him something was off-limits without a crying fest breaking out.

So what about the 9 month old? She really doesn’t test me as much, but things happen. Today, she blew raspberries with a full mouth of food. Not fun for me to wear baby food. I just gave her a look and she stopped. Her personal biggest challenge has been biting me while nursing.

Kaitlyn has no teeth yet, but every now and then gets a glint in her eye and slowly bites down. It doesn’t hurt in the least, but I tell her firmly “Kaitlyn, that’s a no, you don’t bite your mamma” and detach her. It is hard for me not to smile because she knows what she is doing is wrong and gets a kick out of it…but I won’t be smiling once those teeth come in, so I want to correct this issue before she gets those pearly whites. She has gotten a lot better. Last night I saw that glint enter her eyes and I just gave her a look that said no. She just smiled at me and continued on without biting. She had a little smile on her face, like she had been caught and thought it amusing, but no biting.

So long as you keep your expectations in check, you can start to teach your child to obey from a very young age. It will make your toddler years a lot easier.

Thanks for your feedback!