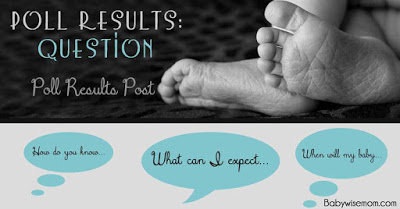 One of the major benefits of Babywise is having a predictable schedule/routine. Getting there, however, can seem like an impossible task. So how do people do it? I asked you readers that in the latest poll. Here are some great words of wisdom on how you can get baby on a schedule and how to stay there.

How to Create and Maintain a Schedule

1. What age did you aim for more of a schedule/routine and move away from a pattern?

Ashley said: “I started implementing schedules/routines once my son was 1 month old. That was when we introduced and worked for consistent eat/wake/sleep times. We have really stuck to certain elements of the schedule such as breakfast, naptime, and bedtime. Now that he is almost three years old, the rest of his day is more of a pattern due to how I work outside of the home for the mornings. If I was home more, I would want to schedule his mornings a bit better.”

Katie said: “Around 4 months old. This was partly because around this age, my kids wouldn’t nap more than about 3-4 times a day anyway. Once they reach 3 naps a day, around 4 to 5 months old, it’s important to start using the clock so you can make it through the day and short naps aren’t causing your last nap of the day to fall way too early.”

Naomi said: ” 2 months with both kids but it was several months before we truly had a BTC schedule”

Erin said: “We started trying to schedule/create a routine after about two weeks. We worked on full feedings first. Once that was established, we concentrated on waking up at the same time each day and going from there.”

Also, to establish the schedule rather than the pattern, you just first need to get on a pattern! 🙂 I think you can work to get your child to move toward a more predictable schedule that way, so establish the pattern first and then really get that daily wake time consistent. ”

2. What did you find vital for attaining a predictable schedule/routine? What did you implement that made the difference?

Ashley said: “Consistency was the key! We wrote down the times we wanted to hit for feedings, naps, and other sleep. Setting goals was really key, as was communicating with my son’s babysitters. We kept trying to hit our goal times, or adjusting the times if we found they weren’t working. It certainly took a lot of trial and error, but we were determined to make his schedule work!”

Katie said: “The clock, a strong will, and some earplugs to start. 🙂 It’s a new experience for baby and the only way to really teach them is to just do it. It’s an important balance to evaluate your particular child AND typical schedules for their age when figuring out what they need for their daily schedule. (For example, if you have a child that has one nap that is particularly long, your schedule might differ somewhat from other babies of the same age, but still should fall on about the same number of naps a day).”

Naomi said: “waking the baby at the same time every morning”

Erin said: “To keep it predictable, we had to start at approximately the same time each day and go to bed for the last time around the same time of night. That really helped balance everything – even when all the naps were wonky. We didn’t really implement anything (other than Eat/Wake/Sleep), it just took some time to get it established. So… I guess I tried to implement patience :)”

Laura said: “Three things: as said above, the daily wake time. Next, knowing sleep signals and making a point to remain calm when hearing peeps, grunts, talking in sleep, etc.

Finally, and this is important: if either my toddler or my baby wake up extra early (say, an hour or more before DWT), I treat it as if it’s night wake. With my toddler, I make a point to emphasize that it’s still night time, and I give her a simple book and a water bottle (this happens whether or not it’s dark or sun’s a blazin’. With my infant son, I nurse him if necessary with as much as he needs and then put him back in bed right away. He babbles but then sleeps soon and then wakes up about a half hour after DWT.”

3. What did you find sabotaged your efforts for a predictable schedule/routine? What would you recommend people avoid?

Ashley said: “Giving up too easily definitely sabotaged us. Making assumptions instead of holding to a plan also hurt. Having unrealistic expectations really discouraged me, so try to keep perspective that you’re working with infants/small children.

I would also recommend to avoid worshiping the schedule. There are times my son needed extra assistance (ie: sickness/teething) or we needed to be flexible (ie: family outings/events). It can at first feel annoying to break from the schedule you worked so hard to perfect, but give yourself and your littles grace so you can best enjoy life :)”:)?:

Katie said: ” I recommend avoiding short naps. 🙂 🙂 For me, having company and traveling made it difficult. When we had company or took vacations, I had to learn to stop trying so hard to stick to the schedule, but it was important to me to minimize especially the travel in the first year in order to establish the schedule with baby and help it be a routine s/he could truly rely on. In order for baby to get that comfort of knowing what to expect next, I think it’s important that, up to 12mo, they basically get their routine 6 to 6.5 days a week.”

Erin said: “My own expectations sabotaged me to some extent. I wanted everything to work immediately and really had a hard time when a nap didn’t go as planned. Again, give yourself some grace and avoid too much ‘troubleshooting’ if one nap is off.”

Laura said: “Sleeping in too long. I know – everyone wants to sleep in, but it ends up backfiring on me way more than it helps anyone at all. ”

4.Any words of advice for parents out there?

Katie said: “I think parent personalities come into play big time here, and each parent needs to evaluate their own. Some of us are more rigid and happy to stick to a schedule, but thrown off by things like company, travel, or church. Others have a hard time with schedules, but need to learn to stick to one for the sake of our young babies and children who truly benefit from them.”

Naomi said: “Be as consistent as you can but when the baby doesn’t cooperate, don’t sweat it! Consistency will come eventually.”

Erin said: “We persevered and I’m so glad we did. Our little guy is a happy, well-rested, scheduled kiddo who handles changes so well because so much of his day is on a routine. Stick with it because it really does get so much easier.”

Laura said: “Don’t worry!!!! Give it an hour, a day, a week, or even a month for things to work. You will see improvements every day, even little ones, as you try to get you and your baby on the same wavelengths. It will all come together, and you will get to know each other in a wonderfully intimate way.”

1 thought on “Creating and Maintaining a Schedule {Poll Results}”