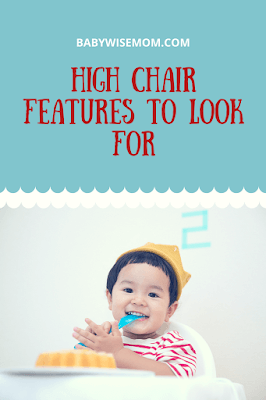 A lot of people wonder what to look for in a high chair. There are so many possibilities out there! First, you need to decide what you want it to be able to do, your space available, and your budget.

When Brayden was ready for a high chair, we bought a booster seat that was portable, had a tray, and could recline. It turned out to not be the best thing. We did get use out of it, however, when Brayden graduated to a booster seat from the highchair at 18 months.

At 6 months (started solids at 4 months), I got a highchair. He started eating a lot more and I attribute that to the fact that the highchair was a lot more comfortable so he would sit in it longer. Shortly thereafter, he started sleeping longer for his naps. Are the two related? It is impossible to say for sure. At the time, that is what attributed the better naps to. So, here are the qualities I recommend for a highchair. It is personal preference and people like all types, but here are my opinions.

That is all I would find necessary. Other features are just nice bonuses that depend on how you plan to use it:

As I said, there are all types out there and each one is like by someone for some reason. Determine your desired uses and go from there. These are just features I personally like.
Reader Questions:

5 thoughts on “High Chair Features to Look For”