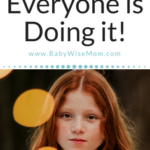 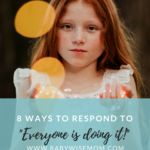 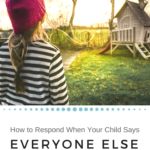 How to Respond to “Everyone Else is Doing It” Avoid peer pressure from your parent peers, whether real or perceived. Stick to your family rules.

We all know the classic phrase. “Everyone else is doing it!” Another variation is, “All the kids my age have one!”

The phrase, “Everyone is doing it!” is a time-honored phrase of children everywhere who are trying to get their parents to agree to something.

The classic response to the classic phrase is, “If everyone else jumped off a cliff, would you?”

While this response is funny and classic, and we adults have just been waiting to say it to our own children, it rarely leaves the child thinking, “You know. Mom’s right. I don’t need that.”

It can be good to crowd source from similarly-minded parents to see if you are on the right track or not; however, you don’t want to drive your parenting decisions based on what others are doing or not doing.

It can be so helpful to have some phrases you have in your family that express the point that your child won’t get to do everything the friends and acquaintances get to do.

Here are some helpful ways to respond when your child uses peer pressure against you. I mean, adults aren’t immune to peer pressure and can often wonder if they are being reasonable or not.

This is my most common response because it is true.

Of course not everyone is doing anything, but I also am in communication with the parents of my children’s closest friend.

So when my 6th grade child said, “Everyone has an Instagram account.” I replied, “No they don’t.”

I then named their five closest friends who ALL don’t have one. Because I know.

This is my favorite response to use because it immediately shuts down the “everyone” argument and the child is left trying to figure out a new way to talk me into whatever they had in mind.

2-That Is So Exciting For Them!

Even if not everyone is doing it, someone IS doing it.

This is a moment your natural instinct will be to disparage the choice the other family made to allow it.

The problem is that for the child to use that information to feel better, he also has to disparage the choice. Then the child is turning to his friends and saying, “Here is why the way you have it is actually dumb.”

It breeds a culture of comparing and jealousy.

With my Instagram example, a parent might say, “Well, Jimmy’s parents must not be concerned for his safety on the internet at all. We ARE concerned about yours.”

This isn’t the best approach.

I like to talk about how that person must really enjoy whatever it is.

“Jimmy must be excited about it if he told you!”

We can also enjoy the way we have it at our house. It is different, and that is okay.

Both choices have their perks and it is okay to be happy for someone who has something you don’t. Do not criticize the way other people parent to make your kids feel better about their life situation.

Let’s stick with my Instagram example because it is a real-life one in our house. I could go off on the dangers of having an Instagram account, talk about pedophiles, say that parent must not care for her child’s safety, etc, or I can say, “Wow, I bet that is fun for her.”

3-Here Is Why We Don’t Do That

I like to take the chance to explain the “why” behind what we have done and the rules we have set.

In reference to point number two, I don’t want to tear down the other option. I speak respectfully of it.

My kids know things are different in different homes and that is okay.

Other parents set rules they think are best for their families and we do the same for ours.

This is a concept my children learn from a very young age.

At the park, I might not allow wood chips to be thrown by my toddler while another parent is okay with her child throwing them.

My child is still expected to follow my rule even if another child has a different rule.

I don’t need my friend to make her child follow my rule in order for my kids to follow my rule. In other words, I won’t say, “Hey, I don’t like my kids throwing wood chips. Can you tell your kiddo to stop so my kids won’t do it?”

My kids won’t do it because that is the rule I have for them.

This is setting the stage for their future!

As they grow up, their peers will have all sorts of different allowances than they do. My kids need to be able to stick to their rules even if others are not sticking to the same rules.

Back to the Instagram example. I explained to Brayden, my oldest, that the reason we don’t allow Instagram in the sixth grade is that the federal government has set laws that protect children online if they are under the age of 13 (this is COPPA).

Those laws are only protective if you do not falsify your age in order to set up an account.

Once you tell the Internet you are older in order to have an account, you aren’t protected in the same way.

I explained we would discuss the matter more at age 13, but that I wasn’t decided for sure on if we would even allow it at age 13.

Our initial rule was it wouldn’t even be a conversation until the age 13 because that is a rule on the platform. That made the decision easily made for us.

With step three, you will invariably get questions about, “Well, why did the parents of so-and-so let them do that then?”

NOT “Well his parents must not be too concerned about following the laws.”

One interesting note, this question of Instagram initially came up for Brayden when he was in sixth grade. By the time he got old enough to legally get an Instagram account, or an account on any social media platform, he no longer had interest.

By then, he had observed a few years of his friends becoming very absorbed in their phones and the technology. He was not impressed with the change that came over them and he choose to not get an account.

As a sophomore in high school, his swim coach initially said all team announcements and communication would be through Instagram. So Brayden set up an account.

After a week or two, Brayden deleted the app from his phone and never put it back on (and his coach found a different way to communicate with the team).

My other children have yet to ask for social media accounts. I think they figure if their older brother doesn’t have one, that means they can’t either, so they just don’t ask.

8 Phrases to Use in Response

I once asked my readers of this blog what their responses were to “Everyone is doing it.” I always find it helpful to have a planned phrase I just turn to when needed. See if any of these phrases resonate with you:

“We want to make wise choices for our family.”

Rene said: With wanting things or to do activities we often talk it out.

For example, my girls wanted light up shoes (they later got them for Christmas from grandparents). It was a good opportunity to talk about budget, giving to others, and comparing cost. Once the 9yo was on board, the younger ones were too. (It’s funny because now the 9yo is very conservative on where she wears them.)

“Other families have different rules; these are your family’s rules.”

“We’re not going to play that way in our family.”

“The road to destruction is broad, but the road to life is narrow.”

“We show kindness and respect to ourselves and others. Is {fill in the blank} kind and respectful?”

“Other families have different rules.”

Amy said: We talk a lot about how other families have different rules, and their rules are good for them, but our rules are our rules and that’s the way we will go.

When my second grader was on his last few days of kindy, the teacher suggested we send in a game that the kids could play as she was packing up the classroom.

So Ethan and I discussed it and we settled on Connect 4 – I figured it was one he could easily set up and there weren’t too many pieces to lose.

“If they jumped off a cliff, would you jump too?”

Manda said: I also often discuss with them why. When my 16 yo was 11 and everyone had a cell phone she was super annoyed that we don’t allow it until the kids are driving age.

I pointed out our reasons (safety, cost, etc) but also what I had seen among her friends. Namely that what they had often wasn’t a full cell phone…it was a prepaid minute plan and they were always out of minutes.

Also, they would get grounded from their phones for misusing them All.The.Time! Seriously, they always had it taken away.

We explained that this was a good sign her friends weren’t really ready for the privilege. She listened but didn’t agree at the time but now 4 years later told me, “I see what you guys meant about the cell phones!”

Humans compare. We just do. What a gift you give your child if you train her to see those differences and be happy for the other person while still working to be happy for herself.

It is a skill that can be learned with practice.

When you find “everyone else” is doing something, it can be an opportunity to evaluate if the rules you have are indeed best, but never succumb to your own “peer pressure” and allow your child to do something you don’t feel is right for her.

Be mindful, thoughtful, and prayerful. Change when it seems appropriate. Always stick to what you feel is best for your family and your child.