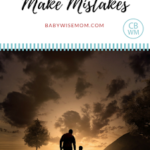 Mistakes are vital for kids to have learn how to be responsible and take control of their own lives. You need to allow mistakes to be made.

As a society as a whole, at least in the United States, we have adopted a mentality that mistakes are bad. We don’t like to admit our mistakes or the mistakes of our children.

We look at mistakes as failure.

If you look at the lives of people who are respected, however, you will see that their lives were not a bundle of perfect decisions and actions with picture perfect results.

Mistakes are not terrible–they are normal. We can learn so much from mistakes.

We often work hard as parents to protect our children from making mistakes. If they forget to take something to school, we run it to them. If they mess up on something, we make excuses for them.

The Love and Logic theory strongly advocates allowing children to make mistakes in life–especially at a young age. Authors point out that when a child makes a mistake, he learns how to correct the mistake and how to avoid mistakes when possible in the future.

As the authors point out, stakes are low in young children.

The long-term impact from mistakes made at age five are significantly less than the possible mistakes even a ten year old or 17 year old can make.

Children need to learn and understand that there are consequences in life and that consequences follow actions–for better or worse.

I first read Parenting With Love And Logic  (affiliate link) when Kaitlyn was first born, so Brayden was right around two years old. I have always believed this to be a good and right principle.

I was pretty sure it would be harder to put into practice, however, when the time came.

It definitely is harder! This is a principle that is easier talked about than allowed to happen.

>>>Read: Should You Bail Your Child Out?

I have a simple example of a time I recently was faced with allowing my child to face the consequences for his mistakes.

I was helping in Brayden’s class one morning. The teacher had been having problems with students forgetting to turn in work as the school year came to a close. She instituted a consequence of if you didn’t turn in your work, you would stay in for recess and complete it.

On this day, Brayden happened to have a missing worksheet. He couldn’t find it and he thus needed to stay in for recess that day to finish it up.

He was crushed to have made a mistake–he doesn’t like to make mistakes.

As I sat there, I was pretty sure I had seen that paper on the counter. He had brought it home from school the day before instead of turning it in.

When I got home, it was indeed on the counter. I wondered if I should run it to the school so he could go to recess.

Remembering the Love and Logic principle I had applied for years, I decided it was best for him to learn as a first grader the importance of keeping track of his papers and turning them in when he should.

I knew re-doing it would have a stronger learning impact on him than if I rushed the paper to school to rescue him.

I told my husband about it and he gave me a funny look so I started to doubt myself and started to feel like a big jerk of a mom. I really respect his teacher, so I decided to call her up and get her opinion on the matter.

She agreed with my decision to not bring the paper in and thought it would be best for him to learn from this to turn his paper in.

As a first grader, all that would happen is he would lose about 5 minutes of recess as he re-did the paper, but he would learn a lot from the experience.

I don’t want you to read this and think you should never apply grace and mercy when your children make mistakes. There is definitely a place for those.

B) that if the behavior becomes a constant, you allow consequences to happen. So if your child forgot his jacket one day, you might run it to him. But if he starts to get careless and starts forgetting it often, you tell him he needs to be responsible for it and if he doesn’t have a jacket that he won’t have one.

Also keep in mind to allow these consequences to happen with a Strong Dose of Empathy. You don’t lecture, you don’t “see I told you so,” and you don’t point out how right you were in the first place.

You just let the consequence be your teacher. Allow for mistakes and your child will learn from them and learn to avoid making more serious mistakes in the future.