What to do when your child has a mini-fit. How to solve the early tantrums your pre-toddler and toddler have. Strategies to stop tantrums.

If you have an older toddler, this post is not for you. Toddlers have real fits. Tantrums. See How To Stop a Tantrum and Tantrums and Discipline for help with toddlers. Mini-fits are almost comical when compared to a tantrum. The mini-fit is likely to creep up somewhere around 9-10 months, though some have them sooner and others later.

Like I said, Brayden’s first mini-fit sent me into a panic. I wondered what had I done wrong? Why was he acting this way? What was I supposed to do? His first mini-fit happened right on schedule. He was pretty textbook about things. By the time he was 12 months old, he was really good at obeying me because we had a lot of practice. The mini-fit did still make me nervous at times, though–especially in public.

With Kaitlyn’s first mini-fit, I didn’t even bat an eye. I actually had to suppress a smile. Her mini-fit came at 14 months old. I just thought to myself, “Sorry, girl, you have a 3 year old brother. That mini-fit is not going to phase me.”

This is the first version of the tantrum. Tantrums come later in toddlerhood. Bad tantrums will come later–closer to two. These min-fits will slowly intensify (or suddenly intensify). Many toddlers get a bit jump in their “fit” abilities around 18 months.

So we know tantrums happen. And please recognize that it happens. The mini-fit does not mean you are a bad parent. It doesn’t mean your child is a bad child. No child is going to make it through life without ever throwing a fit or tantrum. It is normal. That doesn’t mean you accept the behavior, but it does mean you can move forward without harping on yourself and wondering how you have failed.

Sometimes the fits will come more often if you give in to them or have other gaps in your parenting. Adults also throw fits, but we get better at both controlling our emotions and dealing with those emotions. We need to teach our children to do the same.

How to Deal with Little Tantrums (a mini-fit)

It happens. The mini-fit is normal. Normal doesn’t mean acceptable. It doesn’t mean we allow it to happen. We want to teach our children how to react differently than a fit. How do we deal with the mini-fit?

As you continue on through your parenting, this will all become second nature to you. You won’t have to think through. You will be consistent and gain confidence in yourself and your child. You won’t worry so much while in public. 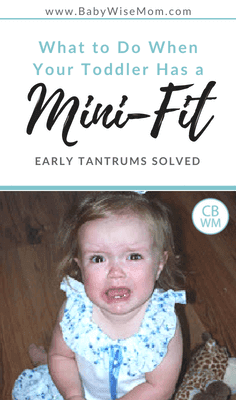 Yesterday we were at the park with about 12 other moms with their kids. Brayden went running off with a friend while carrying his drink. I like the drinks to stay on the blanket so they don’t get lost in the oblivion of the park. I called after him to leave his drink with me.

He wanted to take it with him. I told him no, he needed to leave it with me. He started to insist upon taking it when I gave him my mommy-look and he brought back. This isn’t a shining example in first time obedience by Brayden, but is an example of me sticking to my rules even with lots of moms watching.

It is a risk to insist upon obedience in front of people. If your child refuses, you know you will look really bad. You know there will be some understanding mothers, but you also know there will be mothers who start to think about all the things you are doing wrong.

As Brayden brought his cup back, I realized that in that moment, I had basically blocked out all the other mothers. In that moment, it was me, him, and the cup. I gave an instruction and insisted upon his obedience, and he obeyed. I was happy to know that I am confident enough in myself and in him to not worry about what others are thinking.

Once again, I implore you to not give in to the mini-fit. Trust me when I tell you those mini-fits will get a lot worse in intensity and happen more often if you choose to give in. Tantrums will get even worse if you give in. If you set ground rules and expectations now, future tantrums will not be as bad. They will still come, but will come less frequently and with less intensity.

Related Discipline Posts on This Blog