Teaching your baby sign language has many, many benefits. On Becoming Babywise Book Two has a chapter about doing signs with your baby. As I have said many times, I started On Becoming Babywise with Brayden late; he was 9 weeks old. While there were things he caught on quickly with, overall I felt like we were playing catch up until he was about 6.5 months old and everything seemed to click. At that point, I savored the moment of all of my goals being met. Signing was so far down my list that I never really got to it. He was also very verbal, and always has been.

I have a really good friend who also does Babywise with her son who is 9 months younger than Brayden. She started Babywise from birth and also started signing at a young age. When she started signing I thought, “I really should do that with Brayden.” By that point, Brayden was about 13-14 months old and said well over 100 words. While that is a lot of words, there are far more words that were not a part of his vocabulary, including words that he needed to avoid mini-tantrums (at that time I didn’t think they were mini, but now I know better 🙂 ).

I taught him words and phrases like “all done,” “milk,” “drink,” “more,” “please,” and “help.” He caught on really quickly, and the words really helped him control his frustrations. He is a perfectionist and has shown that from a young age. He is the type of perfectionist that gets very frustrated if he can’t get it perfect the first time he tries something. The word “help” made a huge difference for him. Instead of trying something, not getting it, then starting to cry, he would try it, not get it, start to get frustrated, then sign “help” to me. It helped for a few reasons. One is that he had a way to communicate his feelings. Another is that he had an avenue of thought and action to follow rather than just giving in to his emotions. Finally, it gave him something constructive to do. It showed him that asking for help was more productive than a fit.

With Kaitlyn, I started signing at a young age, though not as young as I could have. Since On Becoming Babywise Book Two is for ages 5-15 months, I started at about 5 months showing her signs. I believe showing earlier doesn’t hurt anything, and plan to start with my next as early as he or she pays attention to what I am doing. That will be easier with future children because at this point, signing is a natural thing for our family. At 11 months, Kaitlyn regularly signs “all done,” “more,” “banana,” “brother,” “daddy,” “drink,” and she is working on “cheese.” It isn’t a large word list, but she is also a big talker and says a lot of words, so our need for signs is not as great as it would be if she didn’t speak yet.

For me, signing is just a communication bonus. It is a way for my children and me to communicate better. My goal is not necessarily to teach a full language to them. Right now, I don’t plan to get into sentence structure and the like with them (not a bad idea, just not in my list of things to do). My plan is simply to teach them words we need to communicate more efficiently.

Benefits of Signing With Your Baby

I have already mentioned one benefit: fewer tantrums. It also helps prevent whining. Another benefit to signing is when you have more than one child. Brayden remembers all of his signs, and is learning the signs Kaitlyn adds beyond what he knows. He and Kaitlyn communicate with each other with signs.

The benefits continue beyond what you might expect. Something Kaitlyn started a few weeks ago that I love is when she is done nursing on one side, she signs and says “all done.” I then switch sides. No more guess-work on if she is done or just interested in what is going on around her.

I recommend teaching your child signs that are meaningful to him. Choose words that will help you and your child communicate better, and also words that he will want to sign. Another strategy is to teach words that your child says but either doesn’t say well or says other words that sound similar. For example, Kaitlyn says “Dadda” for her Daddy and “Duh–Duh” for dog. So when she is talking about her Daddy, she adds the sign. I plan to teach her the sign for “dog” next also.

Remember, you can start at any age, old or young. An older child will be able to acquire new signs much faster than a younger child. If you start as a young baby, your baby will likely show signals that she comprehends much earlier than she ever signs what you want her to.

If you are starting with a young baby, I would start simply by coupling the sign with the word when you say it. As your baby starts to develop fine motor skills, you can start to mold her hands in the position of the sign. At some point, your baby will start signing back, and even signing first.

If you are starting with an older child, you can expect results faster. You can show a sign, help your child sign it, and expect your child to follow suit. You can stress the sign any time your child tries to communicate it through a fit rather than the sign. If your child is capable, you can even require the sign before you move into action.

So, with a baby I just show the sign over and over. Sometimes I take my baby’s hands and show her how, though mostly it is just me showing. Then they start doing it themselves at some point. As she got older, I would put her hands in the position more. I never did that with Brayden, which I think was a mistake. I think they will have an easier time making the sign if they have a better idea how to make it. Kaitlyn’s signs are more accurate than Brayden’s were, and I believe it is a combination of her being more of a fine-motor person than he was and also that I physically put her hands through the motions. If your goal is simply communication with your child, it won’t matter how she signs the word–you could even make up your own signs. However, if she can do them as accurately as possible, there is greater chance she will be able to communicate with more than just you.

Don’t underestimate your baby. Kaitlyn’s greatest love in life as far as food goes is bananas. I wanted to teach her banana so she could communicate to me when she wanted it since she doesn’t say it. I looked it up, and banana seemed like a hard sign for a 10 month old to me. I gave it a go, though. She signs it, and signs it really well.

Don’t worry about perfection in signing. Neither of my kids sign perfectly. My guess is it is like verbal pronunciation, it takes time to get it right. 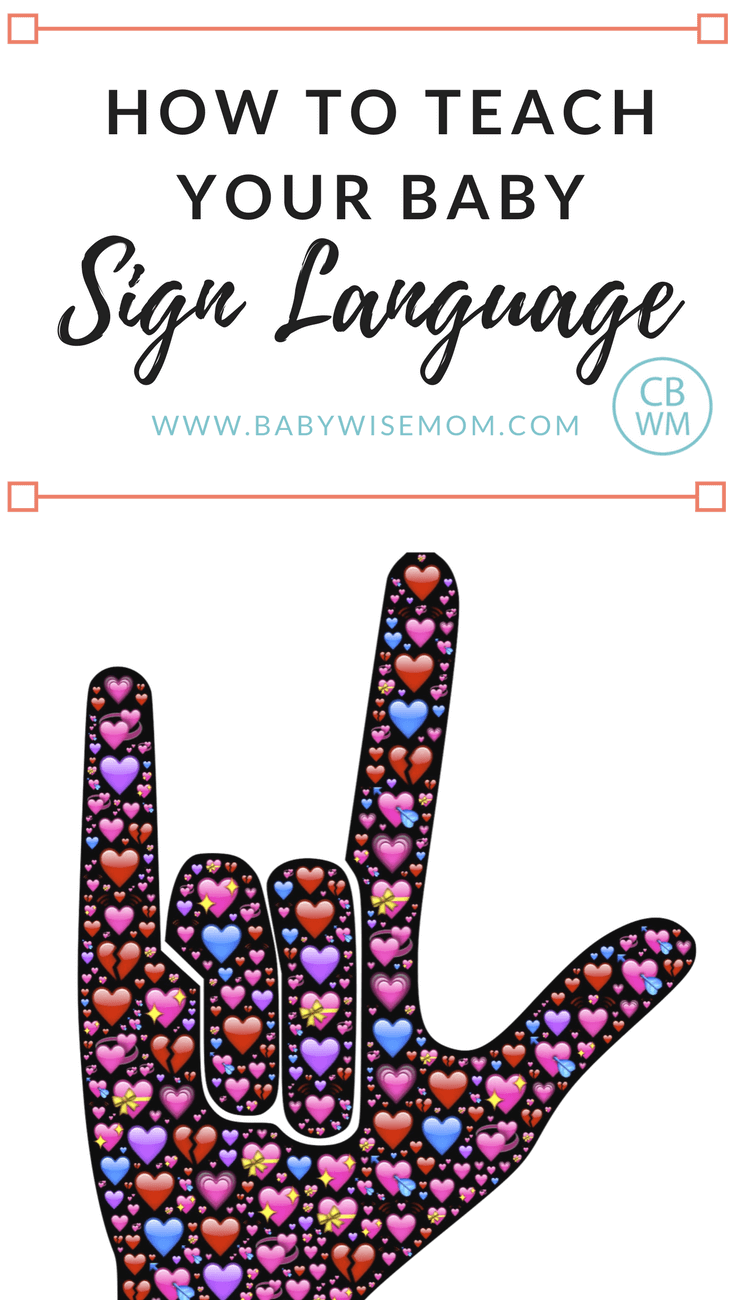 You can be as simple or complex as you want with signing. You can do only a handful of words, or

you can delve into the language. Here is a list of some resources:

I have read and also heard from people that signing will or might delay your child’s speech development since they are signing. I honestly do not believe that to be true.

There is no way to know when a certain baby would have learned to talk with or without sign language. The only way to judge that is to look at babies who do sign language, and those who don’t, and take averages from those groups and compare averages. Even if you did that, it would be very hard to control variables. Researchers would have to take into account if the parents used baby talk or not, if they read to the child or not and how often and for how long, how often signs were done during the day, what the parent’s expectations were for the signs, and whether or not words accompanied those signs, just to name a few. It is unethical to create a study that puts babies into a controlled environment. You couldn’t even compare children in the same family who did signs with one baby but not another because parents change over time.

Remember my friend I mentioned that started signs very young with her son? He verbally said his first word around 9 months and started full sentences at 15 months, which is very early, especially for a boy. Brayden started signs after he already spoke close to a hundred words. He also said his first word at 9 months, and started sentences at 19 months. Still early for a boy, but if you looked at only these two cases, you could assume that sign language speeds along the spoken language.
I can see the theory–if they sign it, they don’t need to say it. However, with Kaitlyn I started signs before words came along, and she said words before the she did signs. My friend’s son was the same way. I think saying a word is physically easier for some than making a sign with their hands.
Also, I have read (in college) that the earlier you learn a second language, the easier it is for you to learn that language and others in the future. The more languages you learn, the easier it is to learn more. So that is a bonus if you get really into it. My husband speaks Spanish really well, and I wish I did. Then we would have Spanish Days at home where that is all we spoke. I had friends who did that growing up.

The Signing Time website (http://www.signingtime.com/) says that studies show that typical children who learn to sign have higher IQ scores, are better adjusted, and read at an earlier age. Here is a link to an article on the website listing benefits to signing.

Other Tips for Developing Language Skills

13 thoughts on “How to Teach Your Baby Sign Language”