Mama, trust your instincts. No one knows your baby better than you do. Trust your gut and follow through on what you think is right for your baby.

Do you know what is often frustrating? When people tell you how to parent your individual baby.

People like to tell you how baby should be dressed, held, looked at…whatever.

In reality, YOU spend much, much more time with your baby than any stranger walking up to you in the store. You also spend more time than those well-meaning family members who tell you the list of things you are doing incorrectly.

I am fortunate enough to have always had fabulous doctors who truly value my opinion on things. This is especially true of my children’s doctor. I could sing his praises all day long. I don’t think he is that way just with me–I think he is a doctor who has a real value of mother’s “intuition” and listens to it.

And doesn’t that make sense? A mom knows if something is really wrong with her child.

Once when Brayden was 9 months old, he got really sick. He would not move and just wanted me to hold him, which was and continues to be odd for him. He is a mover. I figured something was wrong, called the doctor, and the nurse told me the standard “wait until the fever has been there for three days” thing.

After that experience, I was resolved to stick to my guns and when I knew something was wrong to just make an appointment.

That is kind of the easier side of the whole thing. It is easy to call and say you would like to make an appointment. That is the trick. You don’t call and ask if they think the child needs to be seen. If you think something is wrong, you call and tell them you want an appointment with the doctor. Now, I am not one of those people who is at the doctor for every sniffle. I go when I know the child needs to go.

The harder side of the situation is when a doctor thinks something is wrong against what you think.

When Kaitlyn was 6 weeks old, she started pooping black poop. This is of course alarming and I took her to the doctor. But her doctor was out of town. The doctor we got was reasonable and was taking simple steps to monitor her. He even told me what he would do if she were his child versus what he has to recommend I do so he doesn’t get sued. I liked his honesty.

We had some blood work, tested her stool for various things, and were watching the situation. I didn’t feel like anything was wrong, so I wasn’t worried.

Well, that doctor went out of town after a few days and a new doctor got the case.

He called me at home and told me to take her to the ER immediately where they put an IV in her and did some tests where she was required to lay perfectly still for an entire hour (which she did). In the end, they found nothing wrong. All tests were inconclusive.

All along I had been telling doctors I thought it was because I was bleeding from my nipples (you might recall in the end I had thrush or yeast in my nipples, though I didn’t know it at that moment). I figured she was pooping black poop because it had my blood in it (gross). Only my first doctor entertained the idea. And her actual doctor when he got back in town.

In the end, when I stopped bleeding, she stopped pooping black poop.

Here is my point. Trust yourself. You know your baby very well–better than anyone else. You know what is normal and what isn’t for your baby.

Listen to the doctor, yes. A doctor has a medical degree and training you don’t have. But listen to yourself, also.

When Kaitlyn was a baby, a certain someone I will leave nameless (but not my husband) tried to tell me what she did and didn’t want. It was irritating to me because I knew that in 24 hours of her life, I had spent more waking hours with her one-on-one than this person would in years.

I know my children. Do you remember when you were a kid and your mom could just look at you and know if you were sick or not? Moms just know.

Call it intuition, call it common sense (time with person=knowing person), call it help from on high, call it whatever you want, nobody knows your child like you do.

A great doctor will get to know those things and will listen to the parents when they explain what is normal and what isn’t.

Now a story to illustrate where I have come to. McKenna had no fever and no symptoms of being sick other than that she was cranky. She was eating well and sleeping well. She was just disobedient and otherwise irritable.

Knowing my child, I knew something was wrong. She had all of her teeth in so I knew it wasn’t that. I called and made an appointment. I just told the nurse I needed an appointment.

Why? Because she is cranky and something is wrong. No questions asked. I was confident and they knew it.

I wondered if the nurse rolled her eyes behind the phone because I realize it sounds crazy, but I knew something was wrong. After a visit to the doctor, we found double ear infections.

On Becoming Baby Wise  (affiliate link) says, “No one knows a baby like his parents, and if you sense something is not right, for your own peace of mind and for your baby’s health, pursue medical advice until you are satisfied your baby’s condition is understood” (page 159).

Trust yourself and what you think is up with your child. This can be applied to sickness, eating issues, sleep issues, and behavior issues. Listen to yourself and remember, nobody knows your child like you do. 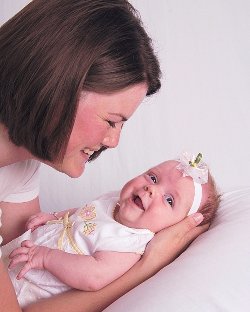