This time last year I was writing a Babywise success story. I was proud of my accomplishments with my first son. He was well-established in his sleeping and routine. Yes, there were issues. Yes, there were things about Babywise that I wish I had incorporated better. Yes, there were even some things I saw in my personality that were now coming out of my son. But overall, the apple hadn’t fallen far from the tree, and my husband and I were tickled! Our almost three-year-old firstborn was a major success in every way. 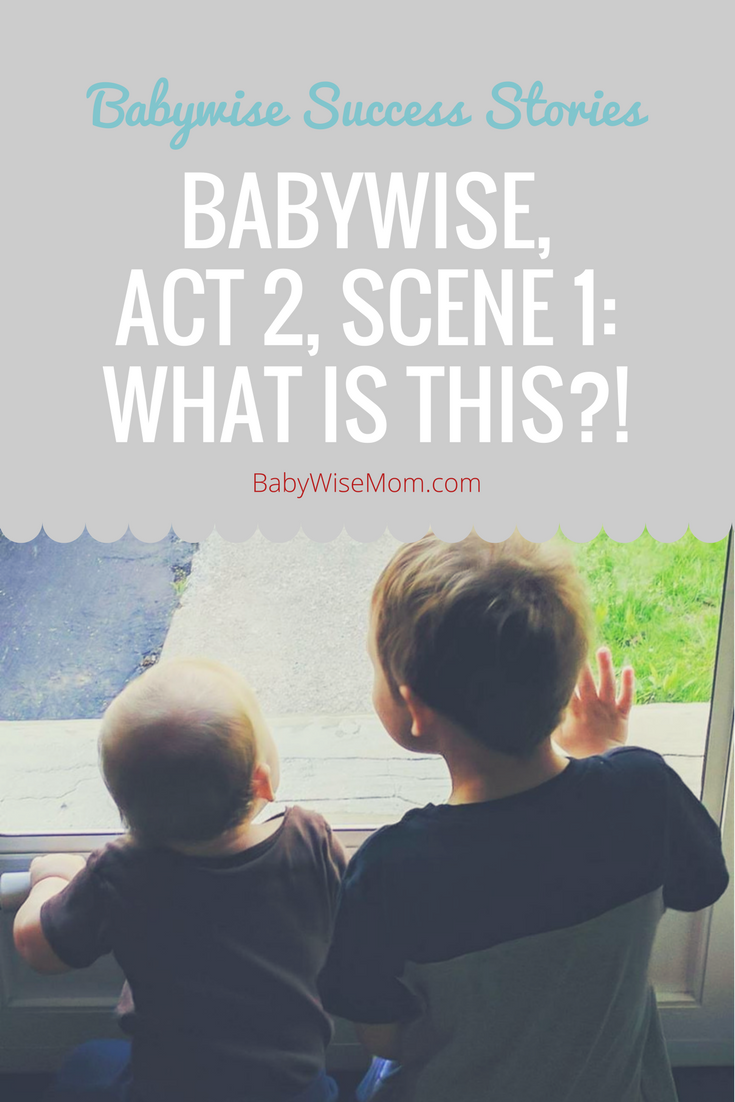 This time last year I was also pregnant with number two, J2. J2 threw me for a loop from the get go. He wasn’t conceived on time (per my schedule). He wasn’t the gender I expected (I was almost confident that he was a she based on different feelings in pregnancy). He never posed nicely for an ultrasound. He shifted from head down to transverse at 38 weeks. (For those who are curious, that hurt like the dickens. Oh my goodness, I am recalling the major discomfort now.) He shifted from transverse feet up, to transverse feet down, to full-out breech. At 41 weeks, we scheduled the C-section. J2 just wasn’t fitting my mold for how my second child was supposed to go. First child = Norman Rockwell painting (until he became a toddler).

Good news, J2 was delivered safely and healthily exactly one week before J1’s birthday. How awesome is that? Two birthdays within a week. I seriously love that! I also bonded so much faster with him than with J1. Motherly experience? I can’t say, but I felt so much connection with this little person. We came home from the hospital, and life hit. It hit hard. I technically couldn’t pick up J1 due to his size and my C-section lifting restrictions. I couldn’t drive. It was insanely hot and dry outside (early July). And not to mention, all the “fun” of the newborn stage. To any moms out there that are in the newborn stage, I understand your fear, your concern, your frustration, and your tears. My new baby wasn’t textbook. He just didn’t follow the schedule I set out for him! Why not? It worked so well for his brother. It worked out so well for me!

I had him tested for reflux. We took him to a chiropractor at 4 weeks old. I tried this method. I tried that method. I scoured and poured over resources because my baby wasn’t fitting the schedule! He was sweet as could be, but he wasn’t getting the sleep I know he needed. J2 did not have reflux. The chiro confirmed that. And after four weeks of questioning, hearing those words from the chiro himself made me cry tears of joy! And J2 did not need a regimen of appointments as his adjustment held after just two visits. I was so proud of that little baby! He wasn’t sick or in pain, something just wasn’t right in his environment; which put the pressure on me to figure out what.

At 4 weeks post-partum my mom and grandma came to visit and help. I had other friends visit before then, and everyone said, “Ashley, relax. He’s just a baby. He’s gonna cry. He will get over it.” But I, my friend, I couldn’t handle it. I just couldn’t. I had so much guilt if he was crying because he was overtired. Then I felt guilt that J1 wasn’t getting the attention he needed. And heaven forbid I had half an hour to myself. I was losing it. And my mom said, “How about we get you a swing? That might help.” I never had a swing with J1. I viewed it as an unnecessary expense that would result in a sleep aid crutch. Well, my neighbor sold me her used baby swing, and that swing changed everything. When J2 woke early, I would plop him the swing – swaddled and all. When he started breaking swaddles, he would still sleep in the swing. I could be at peace knowing he was at peace.

I returned to part-time work when J2 was 8 weeks old. The transition at the sitter’s was rough. He refused the bottle. He wasn’t comfortable in the environment. But I have been blessed with amazing sitters. My dear friend used various bottles, various nipples, various feeding positions to get J2 to eat. We tried breast milk and formula. He was a stubborn little beastie. Then, one day, the clouds opened and J2 ate his bottle right up. Then he started sleeping better. Then a schedule was falling into place! A schedule at the sitter’s AND at home! What do you know? It takes practice to get a schedule in place. Who knew time was needed?! (Disclaimer: I knew time was needed. But in the newborn phase, I forgot everything.)

I remember reading on the Babywisemom’s blog that life got better at 3 months of age, and then life was golden at 6 months. I kept shooting for that 6-month mark. My son was successful on the schedule, but he was still waking in the middle of the night. And I would feed him, or hold him, or shush him. I only used the swing once or twice during the night. Once we hit the 6-month mark, he started sleeping through the night! I couldn’t believe it! It was happening. There have been a few exceptions since then, mostly due to sickness or teething, but on the almost-eve of J2’s first birthday we are where we want to be at with him.

Something I hesitate to include, but something I feel needs to be said:

During J2’s first year of life, I have really struggled emotionally. Yes, I bonded very well with him. I love him, I love J1, I love everyone. Except myself. Dozens of times during this past year I have felt crazy. Crazy thoughts, crazy fears, crazy dreams, and more persistent crazy obsessions. I never thought about harming my kids ever. My “crazy” (as I hatingly refer to it as) always directed itself at me. After enough episodes and tears and fears, I scheduled an appointment with a therapist. I was 10.5 months post-partum. I have post-partum depression. It is a struggle to this day. I have triggers, one of the biggest being sleep deprivation (surprise surprise). Mommas, if you’re feeling like something is off, if you’re thinking violent thoughts toward yourself or your babies, if you are months into motherhood and can’t grasp reality, seek someone out. I wish I reached out for help MONTHS before I did. I had friends and family members concerned about me. I never told my husband the darkest of my dark thoughts. I could never voice the thoughts out loud (until therapy). I remember carefully selecting answers to a survey my son’s pediatrician gave me at his 2 month visit. I scored just above the “concerned” level, but I really should have placed in the “concerned” level. There is nothing to be ashamed about with post-partum depression. It’s not fake. It’s not “just a phase.” I’ve had depression and anxiety before, and this feels so much different. Confide in someone trained to help mothers. It is best for you, and also best for your family!

And one more piece of advice for the working moms:

A lot of what you read online by the Babywise moms is from a stay-at-home perspective. I love them and I adore their perspectives! Trust me, this is not a slam to them. It is an encouragement to you that your schedule will look different. Your baby will most likely take longer to adapt to a schedule. Your baby will get there. Looking back, I would love to tell myself to allow 2-3 times what other babies are doing. If the baby in the example is sleeping 6 hour stretches at 6 weeks old, it might take your baby until 12 weeks or 18 weeks. Don’t count yourself a failure just because your schedule isn’t matching what you read online. Working through two babies, I feel confident in my advice to you that babies of working moms will adapt to the routine, but it will most likely take extra time. Hang in there!

Despite the hard work, the tears, the frustrations, the times I refused to read anything Babywise because my baby wasn’t adhering, sticking with the schedule was so worth it! We did lots and lots of adjusting. Lots of reevaluating. At almost one year, we have a happy, healthy, bright, fun, curious, and flexible baby. I love him more than I ever thought I could love another baby! This past year was probably the hardest of my life. But it’s also been the most fruitful and fulfilling. I guess it describes life’s paradox at times. Without my Lord, my husband, and my boys, I probably wouldn’t be in any position to write this story. Through its lengthiness, I hope it gives you some hope.