Last year I submitted a Babywise Success Story talking about how I discovered Babywise and the impact it’s had on my parenting. At the time I wrote it, my twins were just a few weeks old and we were in the thick of the newborn stage. I wrote:

I have the confidence that the twins will eventually sleep through the night (and probably relatively soon!) and that they will fall into a napping schedule just like my other kids did. This phase of tiredness I’m in is just that – a phase – and with Babywise I can rest assured that it will be over soon and I will be back to my normal, well-rested self. 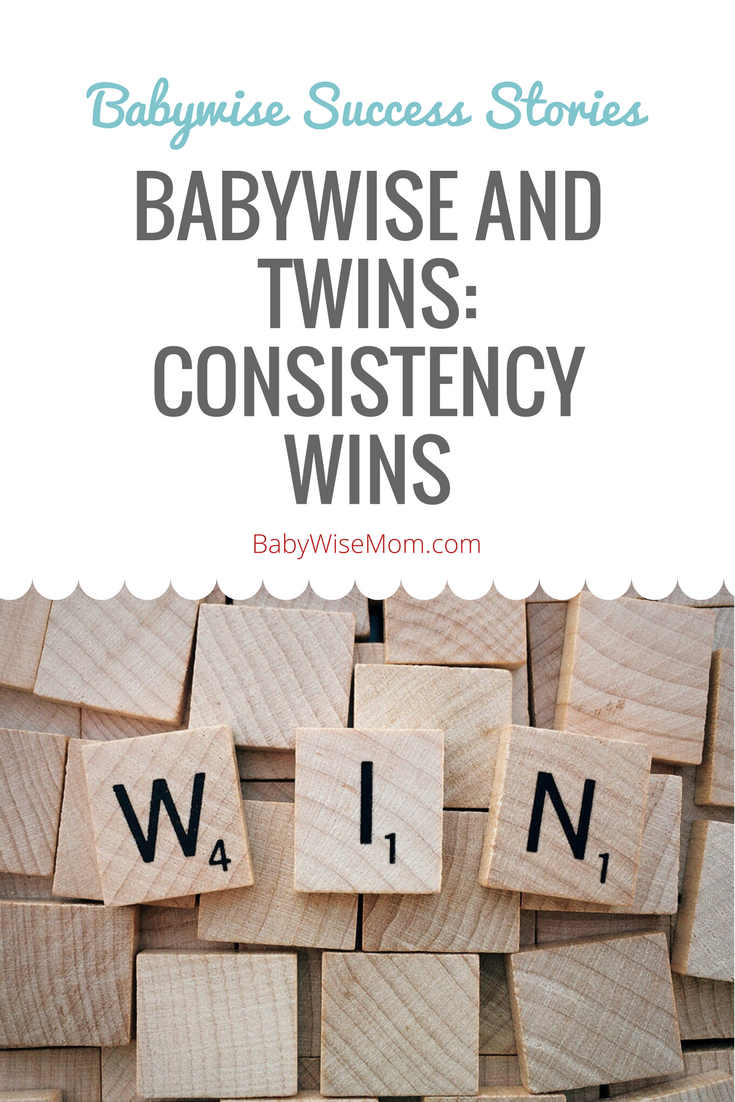 When the season for Babywise Success Stories came around again this year, I thought I might provide a brief update – a little “where are they now?” for those who stumble upon this in the throws of having their own newborns. Hopefully it will serve as an encouragement.

When I was pregnant with my twins, people told me it would be THE WORST. You think I’m joking, but you’d be shocked to hear the things that actually come from the mouths of strangers. Twins get a bad rap, and the general consensus was that caring for a three year old, a one year old, and newborn twins would be a nightmare.

There were hard moments, sure. There were multiple times that all four children were crying at the same time. There were nights I got no sleep. The logistics of grocery shopping were challenging at first. Nursing in public was impossible. Life had to be prioritized and some things fell by the wayside. One time in a Target bathroom I was busy bouncing my twins to keep them from crying while my 3 year old peed and I helplessly watched as my one year old dipped his finger into the toilet and then shoved them into his mouth before I could even scream NO! These are the things that happen when you have too many young children.

How did I do this? Babywise.

I am not a sleep guru. I did not study infant sleep, work in a day care, or put a spell on my children. I do not have a magic touch. I just read Babywise and I followed it. I started the eat, wake, sleep cycle with very short wake times in the hospital. I nursed on a schedule, waking the babies to feed them throughout the day. I focused on FULL feedings, which encouraged longer stretches of sleep and established my milk supply. I taught the babies to fall asleep independently and to self-soothe, choosing not to rely on sleep props. I prioritized sleep, turning down outside activities to establish a strong sleep schedule. These are all principles of Babywise and when diligently executed, they result in a well-rested family.

This was my third go-around with Babywise and it was by far the easiest, which I credit both to “practice making perfect” and to the fact that I was more regimented this time. I had to be stricter – there was just no other way to survive four little ones on my own. And the results were impressive. My twins slept through the night at 11 weeks, which was 1-2 months earlier than my other two. They had established and predictable naps very early on. When this happens – when all four of your children sleep through the night and predictably nap from 1-4pm everyday – you are rested enough to take on anything, even twins! As a mother, your outlook changes when you are rested. Things don’t seem so terrible. Life doesn’t seem so hard.

With four little Babywise success stories running around the house all day, it’s impossible for me to conclude anything other than that when the principles of Babywise are applied consistently over time, the result is a well-rested child. This forms a foundation for all other skills and behaviors. Rest is vital for both baby and mom, and Babywise can help parents achieve it.