I have 3 children and have followed babywise with all of them.

Two of my kids were adopted at birth, and the babywise method provided a great vehicle for bonding with them.

My oldest was adopted and we implemented babywise right away. She took to it like a champ. I felt much more relaxed about bonding in those first months because I could tell she knew I would meet her needs (not that there wasn’t some crying;), and could see her gaining a sense of when those needs would be met. 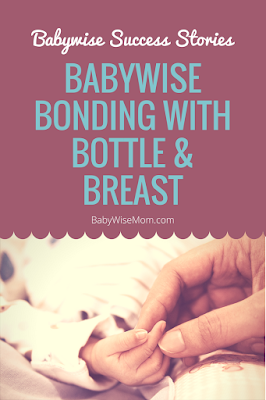 My second was natural and breastfed. Immediately I started off a little on the wrong foot, and who wouldn’t as a first-time nurser?! I nursed her to sleep when she was fussy on occasion, but mostly stuck to the 2-3 hour feeding mark. She was much more difficult to teach to self-soothe and put down awake because I allowed those times of nursing to sooth. I mostly regret that because it made me so exhausted, but also am glad I had the experience to see what it was like. Nursing is such a powerful mystery! Still, she was sleeping through the night consistently at 15 weeks. I’ve heard a lot from nursing moms about how impossible it is to sleep train and know that it’s because of not laying babies down awake, which is so difficult once you’ve established a nurse to sleep pattern. I had to break the cycle by holding her through those times I would have nursed, keeping the paci in her mouth until eventually I held her less and less, and eventually was just shushing and patting until she fell asleep (until my arm felt like it’d fall off!). Eventually she figured it out and I got to sleep!

My third is adopted and I still had milk from my second when she was born, so she is also nursed (amazing!). Right away I laid her down awake and didn’t nurse to sleep. I knew this time around we’d have plenty of special nursing times and it didn’t need to be when she was tired. She’s thirteen weeks and is pretty consistent thru the night.

With all of my kids, as they get older, I see the HUGE benefits of how much sleep babywise provides them. So many of their peers don’t get nearly as much sleep, especially in that first year. Mine are mostly well-rested, and we’re able to get out of the house for chunks at a time. My oldest is now 3.5 and needs to be out running around a little every day. I can skip the occasional nap with my middle child to make that possible for her older sister, knowing that although she’ll be tired, her routine allows enough sleep that it’s rare for her. With 3 kids 3 and under, Babywise also really helps syncing their schedules. Yes, there’s a little time each day where they’re all resting at the same time! It doesn’t last long (I do still have a 3 month old;), but it allows Mama a breather. Their routines provide sanity for the whole family, especially Mama!

The only thing we don’t do is room time. We live in a very small apartment and I don’t keep toys in their room, so they’re always playing in the same room (our living room). I don’t keep toys out that need supervision, and my oldest has a box of “Table Toys” where we throw anything that’s chokable size. This allows me to go about my chores as needed, or tend to the babies without having to shut down play time. They’ve become really independent about it, but of course, are excited to have me join them 😉

I love Babywise and don’t know how Mamas survive the first year without it!