Creative Ways to Choose the Perfect Baby Name. Ten different ways to choose the best name for your baby. 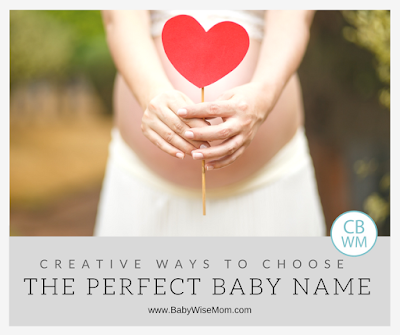 Choosing a name for a baby is a bit responsibility. This is sadly a responsibility that some parents utterly drop the ball on (like…the lady who named her child Vagina. Don’t worry, it is pronounced Vageena. You can’t make this stuff up!). You worry about your baby’s name being the right fit, sounding good with the last name, and having nice nick-names. You want the name to be good for a baby, child, AND an adult. You may want a popular name or an uncommon name. You then have the issues of having to disassociate yourself with other people you have known with names (good luck, teachers!). If you name after family, will you hurt feelings of other family? The list goes on. Add to that the fact that there are two parents naming this baby and not one…it is a wonder any of us have names at all. A name stays with you for your entire life, so it is completely reasonable to take it seriously.

We took it seriously when we named our children, but some names just came to us while others were difficult. Kaitlyn was a name we both
loved before we were even ever pregnant with Brayden. We knew that would be the name of our first daughter. It was set and decided.

Then our oldest was a boy. I wanted a name chosen quickly–I hated calling the baby “baby” and wanted a name to call him. We had a hard time choosing a boy name. My husband played football and therefore knew a lot of guys who were basically jerks. He remembers their locker room talk and he didn’t want his son being like many of those people. It took FOREVER to find a name he was okay with. I finally told him that he had to disassociate himself from names. Every gets some veto names, yes. There are some names I just couldn’t do. He had literally never known a Brayden, so in the end, it worked out. We chose the spelling of Brayden because it means “brave” while Braden means “from the wide valley.”

Braxston is the baby boy we lost at 20 weeks. My husband chose his name because the strongest reality my husband had to the baby at the time was my constant contractions.

When Kaitlyn came along, we already knew our first girl name. When Kaitlyn was a newborn, we were at the zoo and heard a mom call out,
“McKenna!” We looked at each other and knew that would be the name of our next daughter.

When McKenna was a baby, I was helping in Brayden’s kindergarten class. I was prepping stuff for the Christmas program and checking off names in the afternoon class (Brayden was in morning class). I came to the name “Brynlee”. I had the thought, “If I have another girl, that will be her name.” And I did!

All of our children are named after family for middle names.

I asked my Facebook followers how they choose their baby names and loved their ideas! Here are their methods.

How to Choose a Baby Name

Choose a Name from the Bible

Relax and Let One Parent Pick

“My first 2 are girls and I
already had names that I loved…so we went with those and my husband didn’t
care too much. I’m pregnant with our third which we just found out is a boy…I
have no names, so I’m letting my husband pick”

“If it was a girl my husband
got to name her and vice versa….we named our son “Frank” after my
Grandpa…my hubby hated t at first but its growing on him

“I got to pick a boy name
and my husband picked a girl name, and we ended up having a boy.

Honestly I heard my son’s name in a show I really like, and when I pitched it
to my husband he liked it too and it ended up fitting perfectly for my son.”

“We decided that I would name girls and he would name boys, but we both had Veto power.”

“We each went on the social
security website separately and chose names past the 200 mark. We wanted an
uncommon name and one not associated with family or anyone we know so as not to
offend anyone. We each made a list of 15 names then swapped lists. We had
4 of the same names on our list, narrowed it down to our top 3 and chose what
sounded best with our last name. We struggled a bit with the spelling but went
with an easy spelling. For the middle name my husband had no clue so I gave him
my top 3 and he chose the one he liked best.” 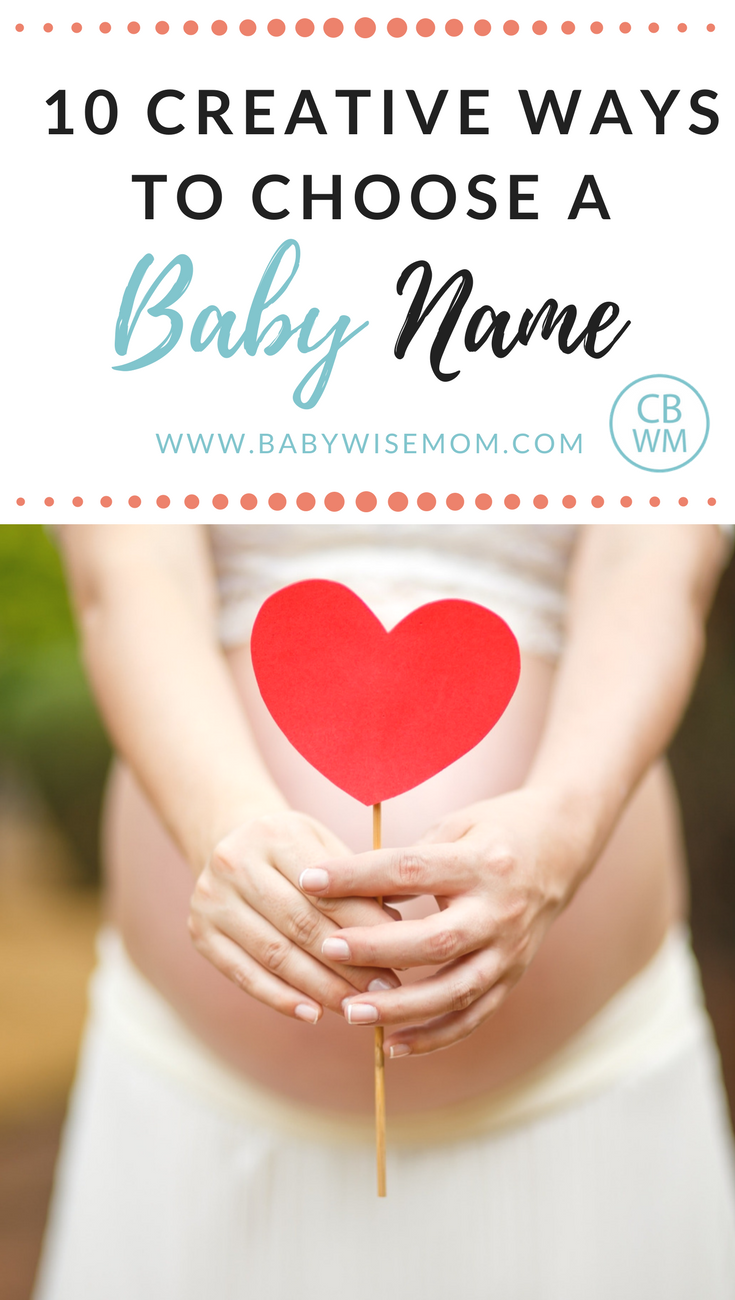 “We talked and talked about
names until we came up with them. It was hard picking names as a teacher where
I didn’t have a bad or weird association with a name lol It also meant I liked
names that were easy to spell and pronounce. Cody James is our first.
Luke Bradley is our second. My husbands 22 yo cousin died on the fire dept
while I was pregnant with Luke. We had a different middle name picked but
immediately decided to use Bradley after him for his middle name. Luke has
Brad’s badge displayed in his room. We talk about it a lot but their daddy is
also a fire fighter so we have to be careful how we tel them about him.”

Angela shared:
“We went with historical
family name. Giuseppe and Gianna were my husbands great grandparents. Giuseppe
immigrated from Italy when he was a child. Later he married Gianna. I like that
they match. They mean Joseph and Jane.”

“Our first was named after
my brother in law & it was such an easy decision (Will) and my newborn was
so much harder to decide on. We finally narrowed it down to two and then took
about 15 hours after she was born to know she was an Eliza and not a Tessa.
Their middle names are both Biblical which was very meaningful to me.”

“My husband names our oldest
after his 2 best friends, Daniel Parker. I named our middle my 2 favorite
names, Konrad Asher. We had to agree on a name for our youngest, and it took
till week 34 or 35, and even that was a compromise: Malachi Patrick, with Kai
as an optional nickname.”

“Was going to be Audrey
Katherine (Audrey comes from my grandmother’s middle name), but my hubby didn’t
think anyone was named Audrey anymore (HELLOOOO… it’s quite popular!). So we
switched it: Katherine Audrey. Kid 2: I originally liked the name Liam, but for
whatever reason, his personality in utero was not really a “Liam.”
Hubby wanted a Biblical name and offered me a list. I picked Joshua and then
added two middle names to make my son named Joshua Patrick Theodore, his own
unique name, my hubby’s name, and my father’s name.”

“My husband’s lifetime best friend (who became mine as well)
passed away a few weeks before we found out. There was no doubt we were gonna
name our baby after him, whether a boy or girl. We had a boy and I truly
believe our best friend is his Guardian Angel.”

“Our daughter was named
after a winery we went to in Napa Valley on our honeymoon. It wasn’t actually
my husband’s first choice but after I was rushed back for emergency surgery
after c-section, he let me decide on her name! Artessa Jane”

“We wanted something not
incredibly common, but something that would be easy to spell and easy for
people to pronounce. We also liked last names as first names. I was a librarian
at the time, and my husband joked that we should pick a name that related to
libraries in some way and we ended up with the name Reid. For our second, we
knew we wanted to continue using R names, and settled on Riley for our
daughter.”

Be Open to Random Inspiration

“We chose Olive for one of
our twin daughters quite by accident thanks to the What To Expect app. We kept calling
the baby (at that point we didn’t know we had twins) whatever fruit/veggie they
said they were the size of. So at first, we called her Baby Rice, Baby
Pea, etc, and when it was time for Baby Olive we said, “hey, I kinda like
that!” and decided on Olive for a girl name right on the spot! We get
compliments on her name ALL the time.

Her sister’s name we struggled with for months! We eventually settled on
Emilie.”

Misty shared:
“Off a souvenir name plate rack outside a tourist shop while we
were waiting for an international flight.”

“I heard someone talking
about Holland and fell in love with it for a girls name. That was about 2
months before I found out I was pregnant. I loved how unique of a first name it
was without being too strange.”

“Apps, books, researching
meanings of names and comparing favorite. Lots of vetoing a la Rachel and
Ross… our last one we could only agree on one name in the last day of the
hospital and now call her a ton of nick names. We call all our kids by nick
names actually. So I think our biggest deciding factors were name meanings and
nicknames. We picked out our middle child’s name back when we were dating; just
tried to think up the most epic name ever and we found it – Maximus!”

Ashley shared:
“Our first was a girl so we had
to find a name, a boy would’ve been “junior.” We first looked at the
top 25 girl names. We both had top 5 names growing up and think it’s cool/fun
bumping into people with the same name.”

Consider the Meaning of the Name

“We went through name lists
combined with names we already had in our heads, checked the meanings and loved
them. Our first means appointed which we thought was pretty special. And the
second means strong fort, protector of man, which we can definitely see already
at 2yo. Names give so much purpose. While they are developing, their life is
paved out in front of them. So cool.”

“I really like names that
have a good meaning, and / or come from family names.
I usually make a short list and then we talked about it and arrow it down.
Right now we have one chosen for number for and we are just letting it sit for
a little bit and till we decide for sure.”

“Favorite literature – such
as Gone with the Wind. Three of my girls are named from that😉”

Call the Baby Names Until You Find the Right One

“Well, for the first one I
made a short list, then my husband and I talked about the names on the short
list, tried using the name(s) in sentances when referring to him until it just
felt right.”