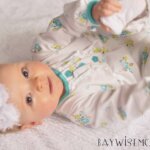 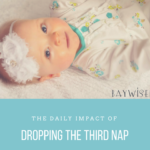 How baby’s schedule should change (and should NOT change) when dropping the third nap. This should be 6-10 months old.

When a baby drops naps, you usually don’t drop that sleep altogether.

Sleep is rearranged, not dropped, when a nap is dropped.

As your baby gets older, sleep time does drop.

Usually, when you drop a nap, you will rearrange the sleep time and then slowly drop that sleep time later in the day. In this post, I discuss the impact of dropping the third nap on your baby’s day. This post contains affiliate links.

When to Drop Baby’s Third Nap

This nap will typically be dropped around 8 months of age. The age range for dropping baby’s nap is 6-10 months old.

By the time baby is ready to drop the third nap, it is usually a catnap, so it is only 30-60 minutes long.

Wondering if baby is ready to drop this nap? Read Dropping Naps: A Quick Reference for common signs.

Dropping the Third Nap Will Change the Day

Dropping the third nap (the evening nap) will impact the rest of your child’s day.

On Becoming Babywise says, “Once the third nap is dropped, both waketime and often the other remaining naptimes will increase in duration” (page 133).

This would mean that baby will likely be awake for other times of day and will likely take a longer nap for the other naps.

Here are some different ways your nap schedule could change after dropping the third nap.

No Change at All

The first way is that it won’t. You have no change to the nap schedule.

Baby’s first nap and baby’s second nap stay at the same time they have been.

Awake time is the same length before the first nap and between the first and second naps.

With no nap in the evening, awake time would be longer. You will also want to move bedtime earlier because, again, you don’t drop the sleep. You simply rearrange it. You essentially move to an early bedtime.

Do not worry about baby going to bed earlier. If you keep the same bedtime routine you have always had, baby will understand it is time for bed.

Baby will also be tired from being awake for a longer period of time or from having less sleep in the day.

If baby will sleep longer for naps, you can allow for a 2.5 hour nap in the morning and a 2.5 hour afternoon nap. That can make up the sleep time lost from dropping the evening nap.

You would then do your bedtime at the same time it has been.

You might try to lengthen baby’s wake time length as you are changing the sleep schedule.

A benefit of doing this is that it can shorten the awake time between the end of the afternoon nap and bedtime.

I have some cautions for you, though. As you are aware by this age, too much wake time will lead to shorter naps. So if you try to have a longer awake time and baby stops sleeping well for the morning nap and afternoon nap, take it back to the length it was.

Often times the first wake time needs to be shorter than the second one, so you could try sticking with the same wake time between morning wake time and the morning nap. Then you add 15-30 minutes between the morning nap and afternoon nap.

If you add wake time to the day and did not increase the nap at all, make sure you have an earlier bedtime.

If you add wake time length AND increase the length of the nap, you can probably leave nap time the same.

Just always calculate the total amount of sleep baby was getting and the amount baby is getting with the new routine and make sure the total time is the same. Just move the sleep as you need to.

Dropping the 3rd Nap In Action

I dropped this last nap differently with my different children. Here is the process I followed with Kaitlyn and Brayden.

Dropping the 3rd Nap with Kaitlyn

Here is how things looked with dropping the third nap with my second child, Kaitlyn.

I started working on dropping that third nap with Kaitlyn when she was 8 months old (approaching 9). We took the weaning process approach to dropping this cat nap (see Dropping a Nap: A Weaning Process).

First, I started to extend the time she was awake. She didn’t really have sleep cues, so I just put her down for a nap when it is time.

Instead of doing that for the third nap, I would wait until she got fussy. If she never got fussy, she stayed up the whole time and didn’t take that last nap.

The nap used to start at 5 PM. Slowly, the nap moved back.

About 1.5 months later, if she needed a nap, it started at 6 PM. That made it a short nap, but that is okay. It was just enough to get her through without crankiness or fussiness.

A month and a half into the weaning process, she only took that last nap two of the seven nights. We were getting much closer to officially being done.

Dropping the 3rd Nap with Brayden

With Brayden, my oldest, I dropped it cold turkey. The whole process was not as drawn out, but we also had at least one week of rough evenings where he was just fussy during that time he would have been sleeping.

The way I did it with Kaitlyn was very easy to accomplish. There were no nights of me walking around the house with her, trying to keep her happy, which was nice since I also had a toddler.

So although it took about two months to drop, it was been an easy process for baby and parents. And at least baby is got the extra sleep when she needed it.

Issues To Watch For

Sometimes we drop the 3rd nap too soon. We parents are not perfect and don’t know everything, so sometimes we get it wrong. Here are some issues to watch for that can indicate baby was not ready to drop the the last nap of the day.

If baby suddenly starts waking in the night, then it might be because the daytime is too disrupted for baby.

This obviously wouldn’t be the only possible reason for night wakings, but any time you change the schedule and night sleep is disrupted, you want to consider recent changes to the schedule.

This can also be caused by baby being overtired. Make sure your baby is still getting enough daytime sleep or that you have an earlier bedtime.

Just as night waking might be the result of a schedule change, so can early morning wake-ups.

Your baby might get really fussy when dropping the third nap. This can be a normal part of the process, but it can also be a sign baby was not quite ready for this routine change.

When you drop the third nap, you are creating a bit of a new schedule. It might take baby a couple of weeks to get used to it. Make sure you have a lot of consistency so baby can adjust to this new routine.

This post originally appeared on the blog in January 2012