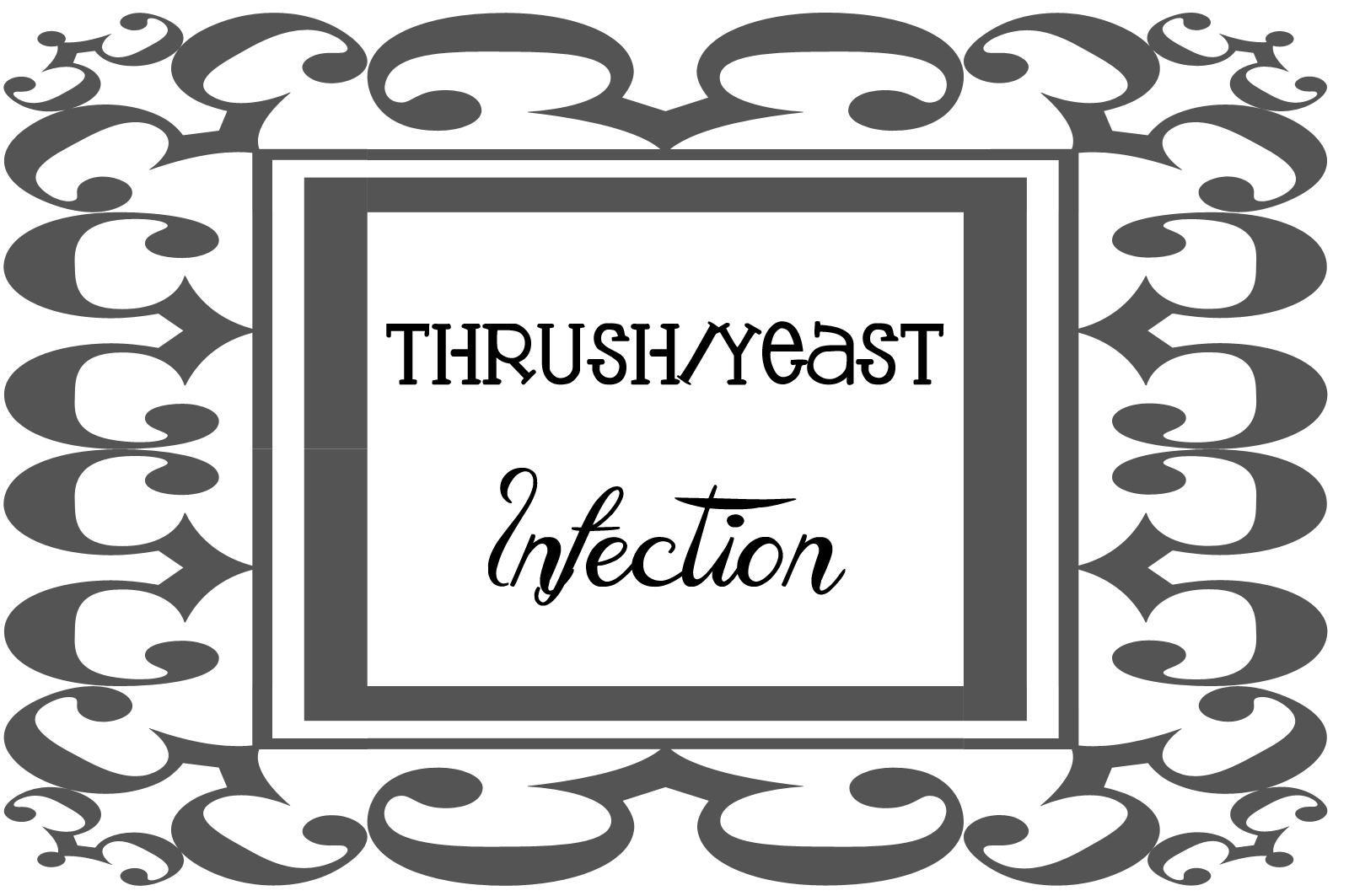 I had thrush/yeast issues with both of my girls. Twice with McKenna. Thrush/Yeast infections are very difficult to get rid of, and I know from experience they are very painful for the nursing mother.

It all started with Kaitlyn. Kaitlyn was born a perfect nurser. She had perfect form and was very efficient. There was never any pain involved with nursing her. When she was about a month old, it started to get a bit painful. At first,  I thought it was normal. It was very painful for me when Brayden was first nursing, so I figured it was just the normal “callousing” coming a bit late.

But it just continued to get worse.

I started to bleed from my nipples. Oh it was painful. I even called my lactation consultant friend and she attributed it to poor latch.

By the time Kaitlyn was 6 or 7 weeks old, my logical brain kicked in. It didn’t make sense we would spend a month nursing pain-free, then suddenly get so bad. My LC friend thought it could be she was sucking harder now, but it just didn’t make sense to me.

Plus, it was only getting worse.

Finally, one day, I “Googled” ‘bleeding nipples’ and up came information on Thrush! Yes! That was the problem! I read about it on several sites and realized that is what I had.

I contacted my doctor and also contacted Kaitlyn’s doctor. She had some thrush spots in her mouth behind her lips, not on her cheeks  or tongue where I was checking.

I wish I could say that after a week of anti-fungal medication, we were both perfect. No. It wasn’t until she was 7 months old that we were finally yeast free. But we did get things so I was not in sharp, shooting pain at even the though of nursing.

So what is thrush? And what do you do about it?

Thrush is yeast. In a baby, you will likely see white patches in the mouth somewhere. The biggest sign for me was that she she had what appeared to be a diaper rash, but it would not go away. It had red, raised bumps all over her diaper area.

Symptoms in mom. For me, it starts with bright red nipples. They are also very sensitive all of a sudden.

It then moves on to burning. It can burn in the nipple area and when it spreads enough, it burns in the milk duct area, so you feel it everywhere your ducts are. At this point, you will have shooting pains when you nurse your baby.

You will start to crack in your nipples. And not just a “I am a first time mom nursing a baby” crack, but a full on split down your nipple. And in my case, blood gushing forth (sorry, but true).

You will need to of course see your doctor AND your baby’s doctor, even if one of you do not have symptoms. Your doctor(s) will decide what is the best course of treatment, but I do think it is wise to be aware of some things when you go.

First, you both MUST be treated at the same time. Some doctors will try to treat just one you, but you both must be treated. Be firm about this. When Kaitlyn was a baby, her doctor told me we both had to be treated at the same time. When McKenna was a baby and I had yeast, she had no visible symptoms. I called the office and a nurse on the phone told me she couldn’t be treated if she had no symptoms. I was finally able to get an appointment and the doctor prescribed treatment for her.

There are several treatment options out there.

Nystatin is a common first choice in treating mom and baby. For baby, it will be drops and for mom, it will be a cream in most cases. Some sources believe Nystatin to be rather ineffective against yeast. We personally haven’t had luck with Nystatin alone.

Yeast problems develop when the immune system is low. So if you or baby (or both in my case) were on antibiotics, then that is likely when the yeast problem developed. Probiotics, like acidopholus, might work to help you fight the yeast, though some have found it to hurt the situation more than help.

Some readers commented that diet change helped them. Maybe adding more yogurt (with active cultures). Some cut dairy. Yeast likes sugars, so going low-carb and high-protein with vegetables can help.

There are some nipple care actions to take. One is to let the nipples dry off completely before dressing, even after nursing. You also want to clean your breasts with water or a water/vinegar mixture after each feeding. You can also do nipple soaks, either in saline solution or in vinegar/water mixture (1/1). Also, keep your nursing pads dry and fresh. Be careful with the nicer disposable pads. They can hold so much liquid you might be changing them too infrequently (I know from experience).

Gentian Violet is a very popular remedy, but one I have never used.

The only thing that has worked for me to finally rid myself of the yeast is Diflucan. And not the “wimpy” route of diflucan, but the ‘take-several-pills-day-one-then-one-to-two-pills-daily-for-ten-days’ route. With McKenna, I had to get a new  OB (old one moved). She is one who doesn’t believe much in treating thrush. She thinks it will go away on its own eventually. Well, maybe so, but try telling my bleeding nipples to wait two months and it will go away. So I had to push for the Diflucan treatment, but I got it.

Also, be sure to ask for Newman’s Nipple Cream prescription if you have cracked nipples. It has to be compounded. I didn’t get that until my second round with McKenna, and let me tell you, it is fabulous. So fabulous. I can’t believe I went through two rounds of infection before this heaven-sent drug was given me.

How To Avoid Thrush/Yeast Infection

This sound pretty awful, right? It is! So here is how you avoid it getting bad:

Here are some ideas from readers they say worked with yeast (other than what has been listed):

Please share any treatments or tips to avoid you have found helpful!