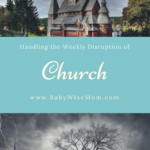 How to handle the weekly disruption of church without destroying your baby’s routine. What to do when baby’s nap is during church.

If there is one place you might be at a disadvantage with a schedule, it is church. Church is when it is and you have no control over that.

Church is a set time that you can’t move around to fit your schedule. It seems to inevitably fall at a time that overlaps a nap, and many Babywise babies won’t sleep in mom’s arms because he is accustomed to and prefers his bed.

Those of you who have had babies in the last couple of years have had certain things a little easier. One of those is that baby’s schedule hasn’t been as disrupted since more things have been canceled or moved to virtual experiences.

But it is time to gather together again. Where possible, we need to be headed back to church in person and enjoy the strength that comes from meeting together.

There are some things you can do to try to make your church experience as beneficial as possible for the whole family.

While church can be hard with a nap schedule, you are only at a disadvantage when it comes to sleep. When it comes to behavior and helping, you are at a great advantage. The nursery workers loved Brayden.

They were constantly aghast at his level of knowledge in various subjects. He sat well and had great focusing skills. He paid attention to the lessons. He was one of the only children in the nursery who helped clean up the toys. He had no problems being left in the nursery without mom and dad.

As Babywise moms, we are used to very content and happy babies. Kaitlyn got fussy for her at church most days as a baby, but everyone at church was constantly commenting on how happy she was and what a good baby she was. And they were right; she was much easier to handle at church than other children around her age. She certainly wasn’t harder; babies are just hard at church.

Okay, so on to the tips. Whatever your method, remember to always evaluate it and be sure what you are doing is best for your baby’s current situation. Your church strategy will need to change often over time.

Naptime is the biggest difficulty for most parents at church.

This nap disadvantage only lasts really a short period. Most younger babies will sleep in mom’s arms or the car seat.

Older babies are more flexible and able to miss a nap more easily.

Also, the nap difficulty hits most toddlers if church falls during a toddler nap. Most toddlers won’t sleep in mom’s arms anymore. Those moms are left with very cranky children if the child isn’t coming into the church already being well-rested in general.

A Babywise child knows how to soothe himself and how to work through difficult situations.

Here are some tips for naps at church.

For more help on sleep, read Going to Church Without Ruining Your Baby’s Sleep.

Another thing that can be hard is when church is over your baby’s regular meal time. When your baby eats at the same time each day, she gets hungry at those times. This is naturally primarily difficult when it comes to feeding solid foods.

>>>Read: Tips for Feeding Baby and Napping Away From Home

Sitting still and being quiet at church is a hard thing for kiddos!

We didn’t let our kids run around and play at church (unless it is in the nursery). They could either sit quietly and play/color/etc. or they could sit still on Daddy’s lap out in the hall.

There was no playing if we go out in the hall. No walking, no treats, no toys…nothing but sitting still on Daddy’s lap.

Because of this, our kids preferred to stay quietly in the chapel with us. We have never had a consistent problem with behavior at church.

This is a policy we put in place before we ever were pregnant with Brayden simply because we observed the results of that vs. playing in the hall with the behavior of children. The toddlers who got to play in the hall consistently threw a major fit if they were anywhere but the hall.

>>>Read: How To Keep Your Kids Quiet at Church

It is helpful to have toys that only come out at church. We have a church bag packed with toys and books in it that are only available at church each week. This way they stay fresh and interesting for Sunday.

>>>Read: The Best Toys to Keep Kids Quiet at Church

Practice at home if you need to. Talk about expectations at a time of non-conflict. Know it is normal to have to remind kids what the rules are from time to time. I still have to do that sometimes with certain teens. Keep expectations fresh.

Maintain independent play at home so your child learns how to self-entertain. This is a time that skill really shines!

This is also a situation when blanket time becomes a hero. Read my Blanket Time Full Guide for help with this.

Here are some notes I kept on how I solved church disruption problems with my kids.

Church was from 1-4 PM. Kaitlyn spent months 0-8.5 on that schedule. We had a lot of different Sunday schedules and employed all of the ideas listed above. For a while I got her to sleep in my arms. After that, she took a “4th” nap on Sundays but no other day (it was at the 4th nap time, but not an actual 4th nap since she missed one at church). At the end of the year, she came home from church and went straight down for a nap. She then ate a little later for the next feeding.

Church was from 1-4. This was our schedule from 19 months to 2.5. Brayden took only one nap a day, from 1-4:30. He went to bed an hour early each Sunday night. When he was at the younger end, he would take a short nap before church.

Church was from 11-2. This was our schedule with Brayden while he was 13-19 months old. This was my favorite schedule. We had to get him up early from a nap and he went down a little late for a nap, but he stayed the happiest because he had shorter naps rather than no naps. He would also go down for the night early if needed.

Church was once again from 11-2. This schedule was absolutely no problem for 3.5 year old Brayden. We got home, he ate lunch, and he took a short rest period. He rarely fell asleep on Sunday. He didn’t need a nap every day of the week anymore, so we had no problem.

For 1.5 year old Kaitlyn, it really wasn’t a problem either. She was really well behaved at church. Monday, she was tired. She had a shorter nap on Sunday and the time of the nap was very different (tending to start at 2:45ish rather than 1:00).

So Monday there was fatigue, but she bounced back.

]With church from 11-2, it started off well for McKenna. But by 8 months old, it was a challenge. She was going down for a nap at 10, but then we had to wake her by 10:45. Then we had to feed her lunch during church. She wasn’t quite old enough to just eat finger foods for lunch.

Church from 1-4. This was totally fine for Brayden at 4.5 years old. Any time would be fine for him.

It was rough for 2.5 year old Kaitlyn. She typically napped from 1-4:30. The first two week, she was very tired by the end and was on the floor in the nursery saying, “I want to sleep!” By week three, she had adjusted much better.

It was a much better time for McKenna than 11 was. She got to take a full morning nap. She also got to eat lunch at home. I didn’t have to feed her at church at all. She typically napped at home from 2/2:20ish to 4:30ish, so it did take up her second nap. She didn’t sleep at church. What we did was get home, feed her dinner, then put her down for a nap.

She slept until about 7:30, then I got her up, fed her, do pjs, story, etc. and put her back to bed. It worked really well. She does have a bit shorter than normal waketimes on Monday, but not too bad.

Church absolutely does interfere with your baby’s sleep and routine. It is a disruption that is worth it. There are things you can do to to help make things easier on you and your baby.