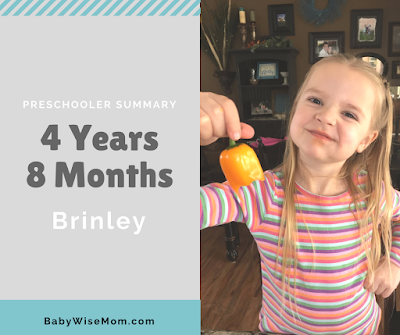 If you ask Brinley how old she is, she will say “Four and a half!” That half is very important to her. This is a summary for Brinley from the time she was 4 years, 7 months old to 4 years, 8 months old.

Sleep is the same as it has been.

Eating is good. Some days for a meal, she only eats vegetables. Somehow that fills her up enough for the next meal. She had a lot of days this month where she ate very little for a lot of meals. This is something that would stress me out when Brayden was a toddler and preschooler, but by this point in my parenting life, I don’t even worry about it.

Part of my not worrying about it is if she comes to me an hour later and wants another meal or wants lunch to happen at 10 AM, I calmly tell her it isn’t time to eat yet. If she responds that she is SO HUNGRY then I tell her she is hungry because she didn’t eat enough at the previous meal.

What I don’t want to do is perpetuate a cycle where she eats a bit, and only a bit because she has other things on her mind she would rather be doing, and then come get a little snack an hour later, then another snack and hour after that. I worked too hard when she was a baby to not create a snacker to turn her into one now.

That isn’t to say she never ever has snacks. She just doesn’t snack all day long.

Often times, she eats very little at a meal because she just isn’t hungry. At those times, she doesn’t come asking for more food later. She does at times, however, eat just a little because she is eager to go play instead of eat. I want her to know she needs to eat meals at meal times.

Last time, I told you about her having too many freedoms and me cutting back. She hasn’t even asked for those freedoms back. I intended to give a lot of them back, but she has been so nice and calm and not asking for them (along with not so emotional throughout the day) that I have held on to those freedoms. Perhaps the too many freedoms was adding to her high range of emotions.

She registered for Kindergarten! It was such an emotional moment for me. She was so very excited. She went with the teacher, and when the teacher came out she told me Brinley did great. I then told her that she is a late summer birthday and the teacher jumped in and firmly said, “She is ready.” I didn’t want her to know her time of birth before she screened her because I didn’t want there to be any sway or bias when she was with Brinley. Her confidence in Brinley being ready helped me feel even better about sending her.

This has not been a decision I have taken lightly. I have literally been thinking about it since I saw the positive pregnancy test and calculated her due date. If you know me well, you know I have been pondering, analyzing, praying, and researching this thoroughly. She is only two months behind Brayden in the year, and she is a girl. So I knew there was a good chance I would end up sending her. I had some difficult decisions socially, though, because literally all of her friends on our street and at church will be in the grade younger than she is. All but one are 1-6 months younger than she is, but don’t meet the cutoff date. That was my biggest hangup. Kaitlyn, however, is the only girl her age on our street and in our church. There are only a few kids her age even in her grade. And she has a lot of great friends. The first day of Kindergarten was the only time I felt like it was a little hard for her as there were lots of children who knew each other and of course paired off to play while she was the ‘new girl.’ She didn’t mind and it was never upsetting to her, but while I saw Brayden with a friend on day one and McKenna with a lot of friends day one, it was a noticeable contrast.

Anyway, I could go on and on about this, and believe a post about the topic is coming your way.

Here is what was pretty consistent for non-school days: