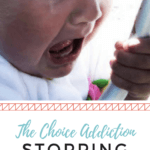 Common choices given to children they shouldn’t have and how to stop the tantrums that go with them.

When a tantrum arises, there can be many causes for it.

One common cause that is wise to routinely consider is that of the “choice addiction.”

The Choice Addiction is a chapter in On Becoming Preschoolwise. I find it to be highly valuable, so I am going to summarize key points from it here. It is chapter 4 and begins on page 65.

What exactly is a “choice addiction”? It is when your child expects to be able to take charge of each situation and make every decision.

Then when that expectation isn’t fulfilled, a tantrum ensues.

Wise in their own eyes

Do you allow your child to make too many decisions? Does she have too much control for her age? You have to be careful about this.

Yes, you want your child to practice decision-making and living with the consequences of those decisions.

However, you don’t want it to get to the point that the child insists on making each and every decision.

The example used in the book is of a 4 year old insisting upon the blue instead of red cup, grape instead of the orange juice already poured, jam instead of butter, reading in the spot he choses rather than where mom chose, switching the story, etc.

However, it escalates into him refusing to eat lunch because he is busy playing. The mom then wonders why he won’t obey.

>>>Read: Wise In Your Own Eyes Explained

The child doesn’t know yet which choices he makes are moral (obeying mom) and which are nonmoral (color of a cup).

He is so used to making every decision that he is resistant to any decision made by mom, often choosing something else just because it is different from what she chose.

Even with my oldest child, I quickly realized that the majority of the time that I experienced behavior problems with Brayden, it is because he had too many choices.

I also found this to be true with all of my girls.

I try to mix things up so an “addiction” to choices does not develop.

I will offer him a choice between X shirt or Y shirt.

Both are shirts I would be happy with him wearing. Whichever shirt he chooses, he wears all day (pending some good reason to change it like he spilled water all over himself or something).

He doesn’t get to choose which shirt to wear every day, just some days.

I mix up the decisions I allow him to make so that he doesn’t come to feel entitled to any.

To give your child too many choices and give too much freedom to make decisions is to push your child developmentally.

It is akin to pushing your child into an organized sport he isn’t ready to play.

Hopefully, you wouldn’t throw your child into that situation of playing a sport against kids before he is ready.

It can also be compared to getting a tutor for your 18 month old to ensure her success in school. That seems to be a little above the level of an 18 month old.

The day will come your child will mature and grow enough that he can make lots of his own choices. But he gains that ability slowly over time.

So if you start to feel guilty about not allowing so many choices, remember you are doing it for the good of your child.

Someday he will be able to chose his cup and his drink every day. For now, you only give him control as he can handle it. Keep it in the funnel.

The reason for conflict with too many choices is because:

“[Your child] cannot handle the power associated with decision-making freedoms prior to the establishment of a self-regulating, moral conscience.”

Keep in mind that allowing too many freedoms (parenting outside the funnel) places burdens on your child.

You expect him to handle things he isn’t capable of handling. It requires him to grow up faster than necessary.

This problem starts with the parents, not the child.

This is why I say that most of the behavior problems I encounter with my kids are my fault, not theirs’s.

I have done something wrong to get us to that point. Keep that in mind.

While your child is misbehaving, it is because of something you have done, not because the child is “bad.”

The good news is that you have more control than you think. You can control yourself easier than your child.

The three most common freedoms granted with preschoolers are decision-making freedoms, physical freedoms, and verbal freedoms. Let’s discuss each.

The real world doesn’t give in to tantrums. The real world won’t tip-toe around him to avoid tantrums. You won’t be doing him any favors if you allow him too many decision making freedoms for his age.

I remember my son would at times be resistant to saying “yes mommy”.

He didn’t talk back, he just avoided eye contact and refused to say anything.

I would wait him out. He was required to say it. He knew it.

One night when he was two months shy of three, we went to the library. On the way out, he broke free of my hand and ran to our vehicle.

He looked away and furrowed his brow. He grunted and pointed indicating he wanted to get into the vehicle.

I told him he needed to tell me “yes, Mommy” and once he did, we would get in the vehicle. I told him I would wait. He quickly looked at me and said “Yes Mommy.”

>>>Read: Discipline Phrase: “You don’t have the freedom to…”

How To Stop the Tantrums

This is your ideal situation, but in the real world, you will have times you let your child have too many freedoms.

This is common with every child. You don’t really know what your oldest should and shouldn’t have because you are a first time parent.

Your subsequent children easily get too many freedoms because it is easiest to just let them do what the older kids are doing.

Allowing freedoms is easy at the time, and sometimes we are just tired and take the easy road.

I assure you that I have realized every one of my children have had too many freedoms many times each.

Don’t feel like a failure when you realize it. It is very normal.

You can fix this, and easily. Here is how.

I find this chapter so valuable because I find the choice addiction to be the root of about 90% of the behavior problems I experience with my kids. I hope you can apply some ideas to your children. Of course, this is just a summary. It is a good idea for you to read the chapter and take what you can from it.

8 thoughts on “How to Stop a Tantrum: Address the Choice Addiction”