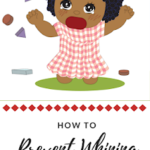 7 important tips to follow to deal with your child’s whining. Find out tips to prevent whining and how to respond when your kiddo whines.

If you do not yet have a child old enough to whine, let me assure you it is one of the most frustrating habits a child can pick up.

Also, the day will come that your little cutie will whine. Whining can happen as young as babies, but it really peaks around age 2-4 years old.

Once that day comes, you will want to know how to deal with a whining child.

I have a few posts on how to handle whining once it is a problem, but as in all things, preventing bad habits is easier in the long run than trying to fix bad habits.

On Becoming Babywise Book Two discusses how to work toward the prevention of whining, starting on page 49. “[Whining] can happen as soon as your child begins to communicate ideas” (page 49).

The authors point out that initially, whining is half-hearted and not done out of rebellion. They do caution, however, that it can become a habit and become a method used to get what the child wants.

In other words, a whining 5 month old is doing it as an effort to communicate with you, not because she wants to express she isn’t happy with your rules.

Whining prior to 15 months is usually due to a limited vocabulary. I would add there will be children out there who still have vocabulary limitations beyond 15 months.

I think just about everyone, parent or not, can answer this question correctly: How do you prevent (or stop) whining from becoming a habit?

Did you say something like, “Don’t give into it?”

We all know that on an intellectual level.

It makes sense. If you give a child what she wants when she whines, she will learn that whining gets her what she wants. She will continue to whine in the future because it is effective for her.

The trick is stopping ourselves from giving into the whining in the moment–we often do without realizing it.

So prevent whining from becoming part of your child’s normal life by not giving in to it.

Understand Why Your Child Whines

Part of preventing the whining involves understanding why your child whines.

Your child might whine because she needs your help. This is where teaching her to communicate with you will help (see more on that in the section below on sign language).

Your child might whine because she is tired or hungry. If this is the case, take care to avoid her getting in those tired and hungry states.

We all know the phrase “squeaky wheel gets the grease.” Whining is a fast way to get attention, so if your child needs attention for any reason, whining will prove to be an effective way to fufill this need.

Your child will whine if it works for her. Again, don’t give in.

Some are also just more prone to whining than others.

Your 10 month old wants more food, but can’t talk, so she whines for some.

Her intentions are not bad–she just wants more food and is doing what she thinks will be the most effective way to let you know.

If, however, you respond by giving her more food (her motives are innocent after all), you are teaching her that whining works. Whining is effective. You are giving in to her whining.

If you don’t think she is smart enough to catalog this in her brain, you greatly underestimate her intelligence.

So what do you do? You don’t want to just not feed her.

You work to give her ways to communicate without whining.

A very effective way to do this is sign language. I love the tool of sign language. A 10 month old is more than capable of signing simple signs to you. “More,” “Please,” “Thank you” etc.

If you have a younger baby, start signing to your baby now. With Brayden, I didn’t worry too much about signing. He started talking around 7-8 months old, so I felt signs weren’t necessary for him.

However, at 14 months old I introduced some signs and it really helped in a lot of situations. Because of that, I started showing signs to Kaitlyn at 5 months old.

She was even more verbal than Brayden, but started signing to me around 7-8 months old.

She even would sign “all done” when nursing. I loved that. I also taught sign language to my two other girls.

Signs are valuable no matter the age or verbal abilities of your child. I encourage you to use them to help prevent whining, whether at the table or at play.

Explain What Whining Is

Your efforts to prevent whining can go a long way. You will have a child who whines less often as you work to prevent it and teach your kiddo sign language.

But sadly, you will not eradicate signing all together. It will still happen.

If you want to tell your child to “stop whining” or “turn off your whiney voice” or “I can’t understand you when you whine”, your child needs to understand what the word “whine” means.

We often expect a child to know precisely what we mean and they are left trying to figure it out.

Make sure your child knows what it means to whine. You might need to demonstrate it. You also want to demonstrate how to communicate without whining.

This is all best done in moments of non-conflict. That means, you aren’t teaching what “whining” means while your child is whining at you. You do it at a time when your kiddo is not feeling whiney.

>>>Read: Training in Times of Non-Conflict

Have a Rule About Whining

Once your child understands what you mean when you say the word “whine”, you can have a rule that it isn’t okay to whine.

I like to make sure it is understood that it is okay to communicate. It is okay to have feelings. But it isn’t okay to whine. “That was whining. Can you think of a different way to say that?”

What is your rule? “I do not answer whining. Ask nicely and I will answer you.” Have something that expresses whining isn’t okay.

Do Not Give In to Whining

Remember, do not give in to the whining when it happens, even if it is innocent. Children do what works, so if whining works, it will continue.

Parents like to give really big threats because they hope it will scare teh child into complying.

But what happens when the child calls your bluff?

Do not give a threat you will not fulfill. A statement like, “If you don’t stop whining, you will never eat a cookie again!” probably isn’t something you are going to follow through on.

Don’t say it if you will not follow through with it.

Sometimes you responding to whining, even if it doesn’t give the child what she wants, will encourage the behavior because your child is then getting attention.

In these situations, it is best to ignore the whining. This will require a lot of patience on your part. Go to a happy place and don’t let the whining get to you.

This is also a good moment to step back and analyze why your child is seeking your attention even if it is negative attention. Make sure your little one is getting enough attention from you in general.

These tips will help you deal with your child’s whining in an effective way. They can help you prevent future whining and to deal with it in the moment when it happens. Whining is a normal part of child development, but that doesn’t mean the whining should always be there. These tips can help stop the whining.

11 thoughts on “How to Deal with a Whining Child”