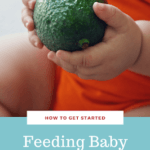 Eating should be easy. The idea of feeding a baby, before you have ever fed a baby, seems simple enough. Baby is hungry. You offer  baby the food of the moment, baby eats, and baby is full.

Then you try to feed a real baby. The real baby might not be a great nurser or might be picky about the bottle. By the time you get any of that figured out, it is time to start feeding solid foods, and it isn’t as easy as it seems like it should be. There are so many possibilities. This post contains affiliate links.

Book 2 pretty closely in starting solids (found on page 45). I basically do it by the book. But the book says they are only guidelines, not rules, so you don’t risk ruining any Baby Wise

Book 2 schedule by doing it your own way. Just be sure to feed solids at the same meal you feed liquid (so you don’t start snacking) and you will be fine.

How to get started feeding solid foods

Here is how I started:

The benefits of sticking to a food group are for the digestive system and also allergy watch. Think it through and decide what is best for you and your baby.