How to teach your child to love others. Instilling morals in your child. 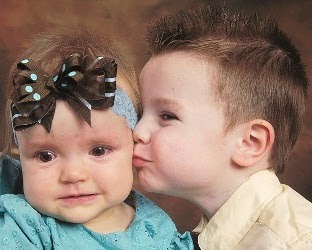 Our son Brayden recently turned three. Before he did, I of course read On Becoming Childwise. While I was reading it, one section really jumped out to me for him. It was the section about providing the “why” of your moral training to your child (starting on page 79). I especially like the thoughts about teaching your child we do things because that shows love.

That is a tangent and above the analytical skills of a three year old. Back to the Golden Rule. I had already introduced this rule to my son. My son can probably be best described as dutiful. I have to be careful of what I tell him because he carries out my instructions as well as he can. He also has a rather large capacity for sympathy and empathy for others. Despite these qualities, we were still having troubles with sharing with his little sister. I don’t want to discredit him. By troubles I mean that I often found myself reminding him that he needed to share. He would then do so. Things were slowly progressing, but I found myself repeating my instructions to him every couple of days. I wanted him to naturally share.

I attempted to reach this goal by saying, “Brayden, do you like it when Kaitlyn shares her toys with you?” He would always respond, “Yes.” Then I would tell him that he needed to share with her so she would want to share with him. He would then hand her a toy. Sometimes I would follow it up with, “Doesn’t that make you feel good to share!” He would kind of nod.

I doubt it really did make him feel good to share because he wasn’t sharing for the right reasons. I was attempting to use the Golden Rule, but I was missing the mark. After reading through Childwise, I came to realize I was trying to motivate him to share by putting forth selfish reasons. I thought those reasons would appeal to a 2.5 year old.

Ultimately, I don’t want him to share only to get something in return. I want him to share even if he gets nothing back. I want him to do nice things for others not for the physical reward or the many thanks received, but because it does make him feel good inside. Because being kind and serving others shows our love for others, as well as for the Lord. How was I going to get there?

I got there by emphasizing the love part of it. I read Childwise on a plane while my husband and I took a vacation without the kids. When we got home, I was very excited to put this new idea into practice. The next time Brayden was hesitant to share, I changed my approach. I asked, “Brayden, do you know why we share with Kaitlyn? We share with her because that shows her that we love her. When you share with Kaitlyn, she knows you love her.” That is all I said. I didn’t further lecture and insist that he share. He thought about that for a minute. He then chose a toy and shared with her.

I soon found that I wasn’t repeating myself to share like I had been. Just like that, he began sharing. Yes, we do have our days I remind him the reasons we share, but instead of being every couple of days, it is every couple of weeks. Vast improvement.

Soon after I had introduced this new idea to Brayden, we went out to dinner as a family. The waitress brought Brayden an ice cream cone at the end of the meal. He was enjoying it and was soon sharing licks with me and with Kaitlyn. He wasn’t, however, offering any to his Daddy. I quietly whispered to Brayden that he could share some with his Daddy too. He responded that he didn’t want to. Instead of lecturing him that he wasn’t being nice and that if he couldn’t share I would take the cone away, I simply said, “If you were to share a lick with Daddy, that would show him how much you love him.” I left it at that. He was soon passing his Daddy his ice cream cone to share.

Children are loving. They want to be good. They want to show their love. When we put faith into the innate pureness and goodness of children, and show them how they can express that, they far exceed our expectations. Of course they need reminding and further training, but they can do it. They have pure, willing hearts. They aren’t born knowing what is appropriate and how to express different emotions (and what is appropriate varies from family to family and culture to culture), but as we train them, they will likely surprise us on how willing they are to learn, and how quickly they respond to the correct method of training for them.