Reading, Writing, and Arithmetic. Writing, or penmanship, has long been part of the core things to learn in school. In our district today, not only are kindergartners writing letters and simple words, they are expected to journal daily. A Kindergarten teacher at our school told me just yesterday, “Some children, like yours, can come to Kindergarten and do that. Others really struggle with it.” 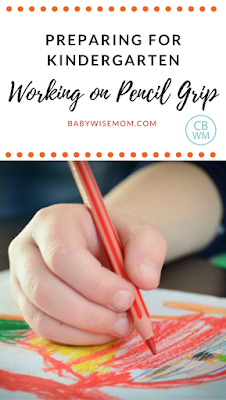 It isn’t a difficult thing to prepare a child for writing in school. It takes some time, yes, but there is not some super secret trick to make it happen. On Becoming Preschoolwise (affiliate link) lists some simple ideas (see pages 124-125). I will discuss those as well as some others.

Initially, you want to be building the muscles needed for writing. One point to focus on is grip. Now, different people give different emphasis on grip. Brayden naturally held/holds his pencil the “correct” way, which is with the index finger and thumb. “They” say this is the right way because it leads to less fatigue, faster writing, and nicer handwriting.

At Kaitlyn’s Kindergarten assessment a couple of months back, the teacher pointed out that she held her pencil “wrong.” I was given a product (The Pencil Grip Ergonomic Writing Aid) (affiliate link) to help her grip correctly. When she used it, she wrote just fine, but without it, she went back to her old ways of holding with the middle and pointer finger on the pencil (as well as thumb).

At first, we really worked on this. Then I got thinking more about it. Kaitlyn will literally draw, color, and write all day long if I let her. I don’t think fatigue is an issue with her–plus it seems muscles should be able to work up an endurance when they are used. She is a great artist and writes her letters well–at this point, she doesn’t have poor penmanship. And here is the ultimate thing–I write the same way she does! Guess what? I was always praised for my penmanship. I still get comments on how nice my handwriting is. I was the fastest notetaker in any college class and despite being an English major (where most tests are written essays), I never had issues with not being able to finish my tests–my speed is fine. So I took a step back and started asking other teachers I know and respect. One was Raegan whom I blog with over at Children’s Learning Activities. Her opinion (which I value and respect greatly on any topic) was that Kaitlyn’s grip was fine. She said it has potential for being an issue with cursive handwriting (it wasn’t/isn’t for me), but that usually the concern comes only when fisting the pencil or when resting on the ring finger. I went for another opinion in my son’s current teacher in school (I also love and respect her opinions). She also thought it was not a big deal. She said in first grade, she does not have issues with grip at all. So there you have some things to think about. We have decided not to fight Kaitlyn’s natural grip. McKenna typically holds things “correctly,” but I do see her sometimes use it with the middle finger as well. I think with her being a new writer, I will watch it closely and encourage the “correct” way, but I am not concerned about it and don’t seen a need to re-teach someone who is an avid writer already.

Watch for relaxed, not cramped, movements as your child first starts coloring and writing. Initially you do not worry about staying in the lines–that comes at an older age. Some 4 year olds get it. Some don’t so much until Kindergarten.

A great thing for penmanship is to build those fine motor control muscles in the hand. Here are some ideas for you:

For a whole lot of specific fine motor ideas, check out the Fine Motor Skills posts over at Children’s Learning Activities. See also our ideas for writing and pre-writing activities.

Your child will love doing various activities you plan to build up these skills. Children love to learn, and it is a great structured playtime activity to include in your day.