I get a lot of questions about what time should be considered bedtime. Generally speaking, your bedtime will be after you 7ish PM feeding. There are exceptions for some families. Here are some things to consider when setting your exact bedtime.

Considerations for preschoolers are very similar to babies and toddlers. Here are some additional thoughts. 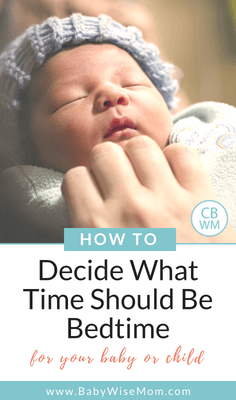 Bedtime for Children and Older

By the time your child is in the child age range and older, naps rarely happen if ever. Bedtime needs to still be early. Children still need 9-12 hours of sleep throughout their growing up years. The length can vary based on sleep needs, but make sure your child is going to bed at the right time to ensure sleep can happen easily and quickly.