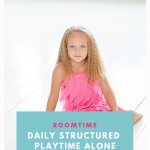 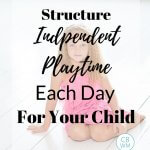 Learn all about what roomtime is, where to have quiet playtime, and how to implement this structured playtime alone with your child.

I always say one of my favorite aspects of the Babywise method is doing Independent Playtime. This time alone brings so much value and benefit to the life of the child, the mom’s day, and the peace of the whole family.

You start Independent Playtime in a crib or playpen. As your child gets older, it is time to move on to a larger space.

When parents are moving from playpen time to roomtime (both forms of independent playtime ), they often have questions about how to do this.

Roomtime is essentially the same thing as independent playtime, just with larger boundaries (a room rather than a playpen).

On Becoming Babywise II says you will move to roomtime between 18-22 months (page 76).

With both of my older two children, I moved much earlier. Brayden started roomtime around 14-15 months. Kaitlyn started it at 12 months.

McKenna, my third child, was in the 18-22 month range. I tried to move her earlier, but she was not happy with that and preferred the playpen.

Exactly when you move your child to roomtime is up to you. Base it on the child’s ability to handle the freedom.

Roomtime is a structured activity. Mom decides when it starts, not the child.

If your child is the type to wander into his room and play on his own for 45 minutes, this is not roomtime.

Roomtime is when mom decides that it is time for roomtime and the child willingly complies.

Roomtime is not a free-for-all. The child doesn’t get to do whatever he wants to. If he is doing things in his room that you find inappropriate, you should stop it. What is inappropriate? That is up to you. You are the parent.

Here are some basics to remember about what roomtime is:

Sometimes it as helpful to point out what something isn’t as much as it is to discuss what it is. Here is what it isn’t:

Getting your kiddo to play alone is not always easy. It can help your resolve to remember why you are focused on it.

“Yielding to parental instruction as standard behavior is part of the learning structure you’re attempting to establish. The self-control inherent in obedience is the same self-control that advances the child in other disciplines” (Toddlerwise page 151).

Here you are developing so many skills, one of the greatest being self-control.

Self-control is, in my opinion, one of the hardest qualities to master in life.

Know someone with a temper (other than your toddler)? Compulsive shopper? Gossiper? Procrastinator? The list goes on.

Self-control is not easy. Giving a child the opportunity to exercise this skill is a great gift.

If self-control is achieved, you are setting your child up to be a healthier, kinder, more stable, more patient, better student, etc etc etc of a person than he would be otherwise.

See why I sing the praises of Independent Playtime constantly?

A common question I get is about a gate or shutting the door. I shut the door at first for roomtime. If you don’t want the door shut, you can do a child safety gate. Once your child is able to handle the door being open, you can leave it open if you want to. You know your child can handle it if he stays in his room with it open.

Brayden (3.5) will happily play in his room with the door open, but still to this day he usually prefers it to be shut. Brayden and Kaitlyn have roomtime at the same time, and their rooms are right next to each other, so it is better for the doors to be shut. Then they don’t have the temptation and distraction of playing with each other during this independent playtime.

You want this to be a time when your child can “focus and play independently without having someone or something there to ‘entertain’ him” (On Becoming Toddlerwise, page 48).

>>>Read: How to Get Your Child to Play Happily Alone

Roomtime can be in a bedroom. Roomtime can also be in a location other than the child’s bedroom (Babywise II, page 76).

Remember, it is just playpen time with extended boundaries, so it can be anywhere you deem appropriate.

Find what is convenient for you. Make sure it is safe for your child. Read all of my tips on a Room Time Set Up here.

My choice was always the child’s room. I know it is a child-safe room without me right there telling them what they can and cannot do.

Not all people can do bedrooms–you might have a sleeping child in the bedroom or the bedroom isn’t a safe room to play in.

In those cases, simply choose another location. The room does not fundamentally matter.

What is the Best Age for Roomtime

Through looking at the -wise books, the suggested age for roomtime (instead of playpen time) is 18-22 months. On Becoming Toddlerwise

There will, of course, always be exceptions to this general age suggestion.

Brayden started roomtime around 14 months because we started independent playtime late. Plus he was a big mover, and I think in general, big movers are going to be happier with a move to roomtime earlier than the sitting-type.

Kaitlyn moved over at 12 months. The reason for this, though, was that the floorspace in her room was not much larger than a playpen would be, and this way I could lazily not set up the playpen and take it down every day.

McKenna was just turning 20 months old when we finally had roomtime success. It scared her at first for some reason, but she was ready at 20 months.

Brinley was also quite young. I don’t remember exactly how old she was, but I do know from looking through her summaries that she was younger than 18 months old.

Here is a key point: “It is important to increase a child’s boundaries as the child develops” (Toddlerwise page 151).

Don’t wait too long to start roomtime or you will greatly frustrate your child.

Also, don’t start it before your child has developed to the appropriate point.

This quote is very applicable not only in roomtime, but in all aspects of parenting. You let go of control over time and give the child more freedoms. Hard? Absolutely. But part of growing up.

Roomtime is the continuation of what you started with Independent Playtime. It is amazing and very useful for years to come, so hang on to this excellent parenting tool!

Grant and Jenni asked:
My son is 20 months old and has been doing playpen time ever since I began staying at home (about 12 months). I switched to roomtime with a gate, but he just ransacked his room and got very upset that I had left him. I tried putting his playpen in his room instead, thinking he wasn’t ready, but he just thew all his toys out. Any advice?

Babywise Mom said:
Grant and Jenni, I think that is pretty normal behavior for the new freedom of being in the room on his own. I would explain to him what he can and cannot do (over and over). When he has done something he shouldn’t (like, when McKenna pulled every wet wipe out of her container…) tell him “that’s a no” and have him help clean up–but don’t make the cleaning up seem like a punishment, just what happens when you make a mess. You clean up after yourself.

Miranda asked:
‘Been wanting to ask a question, but was prompted by today’s post. My son has been doing independent play since 6 months, blanket since 12, and roomtime since 18 months. He’s now 2, but I HATE roomtime. We do 30 minutes, 4 times a week (no weekends and I work one day a week), and he prefers to sit and suck on his fingers rather than play. He stays in his room with no physical barriers (always has), does not make a mess, and knows he can only come out to go to the bathroom. I don’t allow him to suck on his fingers when I’m around (and he doesn’t), but he sees roomtime (and naptime) as his opportunity. I’ve sat outside his room and corrected him verbally when I hear him sucking; I’ve put gloves on him as a reminder (this just makes him cry the whole time); I’ve switched up his toys, but to no avail. Any advice? I’m due with #2 in June and would like to use roomtime as a nursing time… but don’t know how to handle the policing. (FYI, he’s never liked roomtime/independent play…it’s not a new development for him not to play)

Katy asked:
Have your kids ever gotten upset about the door being closed? Did you just ignore it or go in & remind them what that time is for?I did babywise for developing a sleep schedule, but not really for anything else. My daughter is 23 months & I’ve been trying for about 6 weeks to teach independent play. I’ve set a timer that she can hear from her room and showed her what she can play with. I explained what we were doing and even offered a reward for staying in her room until the timer went off. I think it’s happened once. I know she’s capable of entertaining herself – she just watns me to be in the room. Yesterday I spent 30 minutes in her room switching out clothes & she happily played by herself that whole time.Any advice?

Babywise Mom said:
Katy, My kids don’t mind the door being closed. Since she hasn’t had to play alone for so long, I would expect that she will take some time to get to being happy playing alone.

Vita asked:
My question is also of similar nature to others. My son cries any time i leave him alone in the room. Interestingly, it didn’t bother my to CIO to teach him to go to sleep, but it’s harder for me with roomtime. is it normal for them to cry so hard? He is 21mo and is in daycare 5days a week. is it worth it to start roomtime on the weekends? Thanks a lot!

Kim asked:
I have been doing independent play with my daughter since she was just a couple months old and she is now two. I have kind of stopped for awhile because she takes all her clothes out of the bottom two drawers and anything else she can get a hold of. She has plenty of toys and books to play with but as soon as the door is closed, she goes straight to the drawers. I’ve told her no and make her help pick them up, but she still does it almost every time. This has been going on for several months whenever I decide to try independent play. Any suggestions?

Babywise Mom said:
Kim, McKenna was similar. It really just took time to outgrow. I had to be consistent for a month or two of telling her not to do certain things and we had a big mess to clean up. She did eventually stop doing it. So I would suggest you just keep it up and stay consistent and she will get it.