How to Calculate Waketime Length When Baby Wakes Early. How long should baby stay awake between naps when baby woke early. 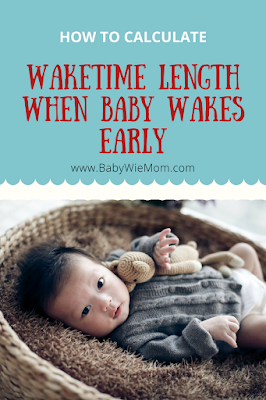 The answer to this would depend on your child. It depends on how long he/she can stay up. It would also depend on how early they woke up. It will also depend on the age. The older they get, the less crucial it is to go to sleep after so many minutes of waketime, but timing of naps remains important with my 2.5 year old. Most babies will need to go down after the appropriate amount of waketime (actual time they have been awake) rather than the time they would normally go down.

No matter the age, don’t keep them up too long. It will backfire. Your child is more likely to sleep longer if he isn’t overly tired than if you put him down later (see Easy Nap Fix). You need to figure out the best thing to do for your child, and you need to maintain flexibility. Your child will change over time. At 8 weeks, Kaitlyn needed to go down after being awake for an hour no matter what. At 7 months, if she wakes up 30 minutes early I can wait and put her down at her normal time with no problems.