The 45 minute intruder is when your baby starts waking up about 45 minutes into his/her nap. Baby is waking early from naps and you aren’t sure why.

When your baby is waking after only 45 minutes, you can really drive yourself crazy trying to figure out why.

But what about when the bad days become weeks? It is the 45 minute intruder!

When I was a first-timer, Brayden took 45 minute naps until he was 6 months old. I always just fed him right when he woke and moved on with my day. Then one day he suddenly started sleeping 2 hours and never looked back.

Kaitlyn did extremely well for her naps for the most part, but we had the 45 minute thing for 3-4 weeks. She would go to sleep without crying at all, then wake up 30-60 minutes into her nap.

If it was only 30 minutes in, I would have her CIO back to sleep. If it was 60, I would give her time–I think about 10 minutes–to get back to sleep. If she didn’t, I would just move her to the swing to finish her nap. I wanted her to stay well-rested. If she didn’t fall asleep within 10 minutes in the swing, I would feed her because I figured she was hungry. This lasted for about 3 weeks.

I know it is so hard to believe it will get better. It would be easier, I think, if you knew exactly when it would end. If you knew it would be like this until 20 weeks then it would get better, you would just wait it out.

To face the short naps with no concrete end date ahead is difficult.

Things that Cause 45 Minute Naps

In The Baby Whisperer Solves All Your Problems, Hogg lists several factors that cause 45 minute naps. All of these factors have been discussed on this blog before, but short naps are such a common problem that I find it necessary to re-post about it from time to time.

The sleep cycle is 45 minutes. Some babies who wake at 45 minutes are doing so because it is a transition time. They either are unable to put themselves to sleep alone, or an external factor rouses them to full alertness. This can be temperature, noises, or even (and especially in the newborn months) hunger. See also: Baby Whisperer: Sleep Transitions , Naps: Troubleshooting , and Baby Whisperer: Sensible Sleep

Read: What is a Sleep Transition (and how does it impact naps)

I have read that babies transition about every 45 minutes, going from REM to deep sleep. It seems a lot of babies will wake up at that transition while they are getting the sleeping thing down. Even if they can get to sleep well initially, there seems to be a learning curve with the transition. That is why it should pass. That is also why it might require some training (read, CIO). Do whatever you are comfortable with.

If your baby was awake too long before her nap, she likely will not sleep longer than 45 minutes. Hogg states that she might not even last the 45 minutes. See also: Optimal Waketime Lengths , Baby Whisperer: Sleep Cues , Nap Cues , Sleep Begets Sleep , Easy Nap Fix

Your baby can also wake at 45 minutes if she was overstimulated during waketime. With the newborn, you need to guard her waketime activities closely. As she gets older, she needs more stimulation. Hogg says that you need to have a bedtime/naptime routine. You can’t just pick baby up and put her in bed. Hogg says that the routine will help baby wind down and sleep better. See also: Sleep Routine Ideas to Get Your Baby Sleeping Well.

Read: How to Calm Your Overstimulated Baby 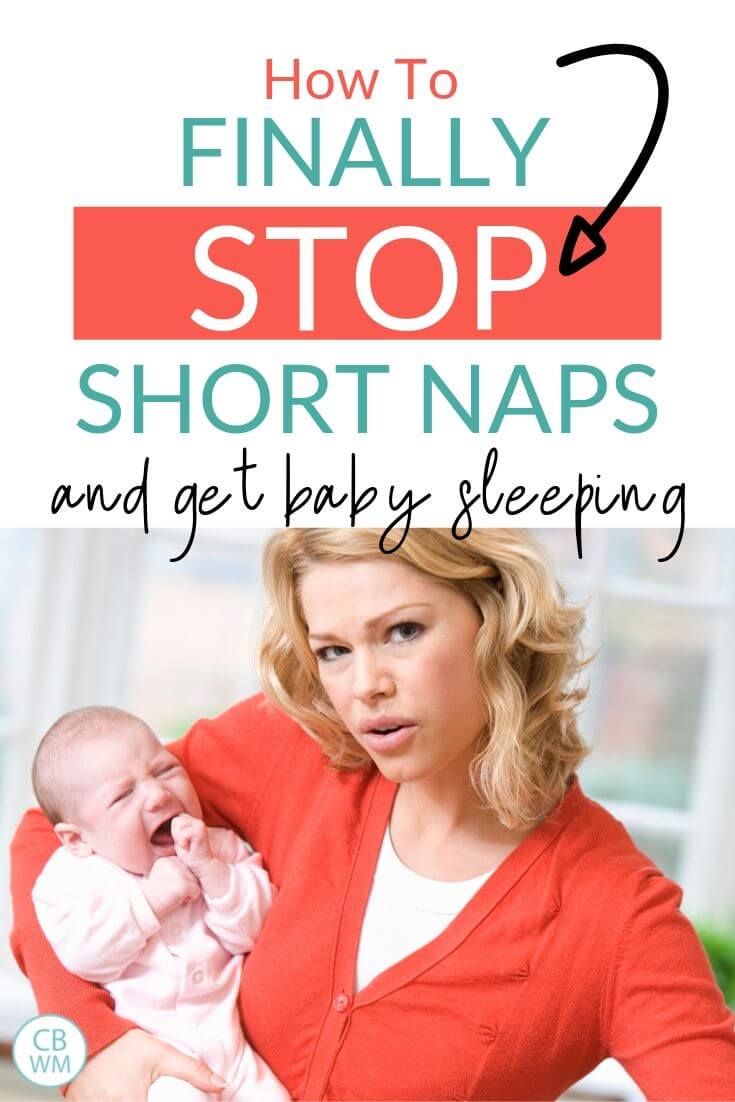 Something to try to do as you work on these 45 minute naps is strike a balance. Keep working on trying to fix it and keep trying to figure out if there is anything you can do to help it, and then just relax. You want to try to fix the short naps, but you don’t want to drive yourself crazy.

Here are some tips to hopefully help:

On Becoming Babywise says to first treat the 45 minute intruder as a feeding problem. By feeding “problem” they mean baby is in need of food. It can be that baby is having a growth spurt or didn’t get enough food for the previous feeding. Try feeding your baby once you know he is awake for good. If it is a feeding problem, it will fix quickly and easily. If you put it off, you will make things worse.

One day Kaitlyn woke early from a nap while I was out in the garden (I used a monitor so that is how I knew she was awake). I ran inside to get her—she was asleep upstairs. By the time I got there, she was back asleep. If I had been inside, I would have gotten to her before she fell back asleep. Give your baby some time–whatever you are comfortable with. I think ten minutes is reasonable.

Watch your use of a monitor

Use it when necessary, but not too much. With a monitor, you hear every little peep and can rush in when baby is actually just transitioning.

Check other common reasons for waking

Check the Naps: Troubleshooting–Revised and Updated post on this blog. Go through that list and check each possibility out.

Wonder weeks can cause sleep problems. This is especially true around 19 weeks old. You can find information on the four month sleep regression here.

Read: The Wonder Weeks and Sleep

If you are sure none of the things listed are the culprit to your baby’s early waking, try to just accept it and wait it out. Read up on Chronic 45 Minute Naps.

I would also recommend you analyze the situation and try to think of what it could be. Keep a log and watch for patterns (you can get a copy of the logs I use here). But once you have given it your all, don’t stress yourself out too much!

The problem I see with this culprit (45 minute intruder) is that little is known about it. You just have to do your detective work and try to figure it out!

The 45 minute intruder is absolutely no fun. Be sure to read How To Deal with the 45-Minute Intruder for even more on the topic.

If you still need nap help, Get a copy of my book, The Babywise Mom Nap Guide. This eBook helps you establish successful naps from birth through the preschool years. It is a great resource!

Kim said…
Just to share in case it helps anyone else out there, my almost 4 month old son has been waking up from the 45 min. intruder for a couple weeks. I started to feed him since that is what Babywise suggests to do. After awhile I noticed that he wasn’t acting that hungry when I nursed him, he wanted the attention and comfort more I think. That is when I decided to let him cry it out since I didn’t want to condition him to always want me instead of self-soothing back to sleep. So I’m currently working through that and although its tough, its slowly working and he’s figuring out how to get back to sleep on his own. Sometimes he even wakes up happily talking instead of crying. I usually let him cry up to 30 minutes before I’ll go in and get him, but 99% of the time, he’s fallen asleep within 10-15 minutes of crying. So I guess my point is when you try feeding them after 45 min. pay attention to whether or not they’re really eating or using you as a pacifier. That may be the clue as to whether you should get them out of their crib or leave them in to cry it out.(although I realize everyone’s situation is different!)
March 7, 2008 4:25 PM